How Zyfra MDCplus industrial machine monitoring and production data collection system helped MAGMA LLC increase efficiency during COVID-19 instability, prioritize and redistribute orders within the factory based on urgency and switched part of the staff to remote work.

For several years now, MAGMA LLC has been actively building up its portfolio of orders and expanding the geography of the business. This has, of course, forced us to review and optimize the business processes that previously functioned within the enterprise. The main problems which the management of MAGMA LLC ended up facing were a decrease in production efficiency combined with increased production volumes and a larger machine tool fleet. The management could not effectively influence this situation due to the opacity of the production information model. The input and output data could not answer the main question: “Why?”

Keeping abreast of developments in the world of digital transformations, the company’s IT department began to study the issue of digitalization of production while considering the fact that the main bottleneck was universal machines, not CNC.

Initially, the equipment performance monitoring system had the following requirements imposed on it:

– recording the operating time and downtime of equipment;

– decoding the causes of downtime;

– detecting the no-load work of machines.

Having studied various software solutions on the market, the chosen product was MDCplus developed by Zyfra, Finnish industrial digitalization leader. In addition to these requirements, the system allowed for a number of “bonuses” in our circumstances:

– organizing the storage and transfer of the NC program to the machines;

– an emergency notification system for the machines.

We were able to deploy the pilot project fairly quickly. It involved five key machines of various types – universal and CNC. We began to receive data on the operation of machines almost immediately but without identification of the causes of downtime. While trying to detect and identify the downtime, we faced the first problem – machine operators were very reluctant to enter downtime data, sometimes simply forgetting to do it. But this problem was quickly resolved. A team of young machine operators came to the rescue, entering all the causes of a machine’s downtime every day for a week from the moment their machine was connected.

Following the results of the first week, it turned out that the productivity of their machine was predictably low, around 38%, but this was not at all the fault of the machine operators. The technological downtime amounted to about 10%, which is quite acceptable, while the remaining 90% was purely organizational: lack of a tools, lack of a workpiece, issues with the technological process, etc.

An analysis of these indicators allowed us to quickly take organizational steps and resolve the issues related to the delivery of tools and workpieces to the site. The machine’s productivity came close to 50% by the end of the month, and 60% by the end of the second month.

The productivity rate increased, and the machine operators started making more money. This example served as a call for other machine operators to record the causes of downtime every day. This is how the problems with universal machines were solved.

The second problem turned out to be the use of CNC machines with NCT terminals in the enterprise. At the time of the pilot project, MDCplus did not support the NCT protocol. But this issue was resolved relatively swiftly. By the end of the pilot project, all of the data for the implementation of the protocol had been collected.

Following the results of the pilot project, it was decided to connect 36 machines to the system: 25 universal and 11 CNC (NCT, Fanuc, Heidenhain, Siemens). At the same time, a non-standard decision was made – to give up on monitoring panels and TVV-10 terminals in favor of dust- and water-proof smartphones. This turned out to be especially convenient with large machines – there is no need for the machine operator to go down to the control panel, they can simply take the smartphone out of their pocket and enter the necessary data into an application specifically adapted for Android or iOS. At the same time, any manager can see the status of any piece of equipment on his mobile device in real time. 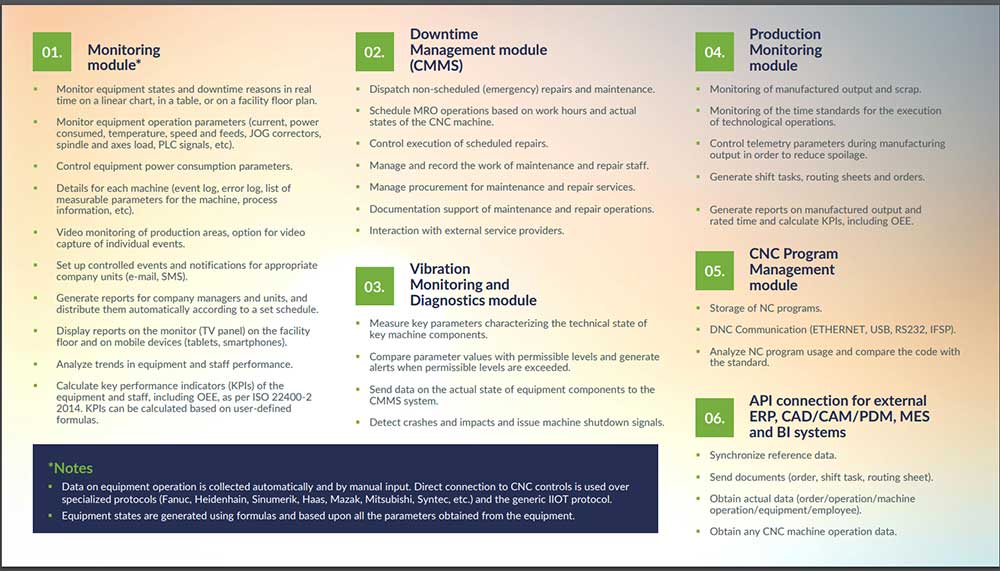 At this stage, the project is still in the process of implementation, since the integration of MDCplus with the ERP and MES systems functioning at the enterprise has yet to be completed in order to close the production cycle. But some conclusions can already be drawn.

For example, during the COVID-19 pandemic, part of the workforce was supposed to remain at home in self-isolation. The goal was to organize the work of personnel without a loss in production efficiency, and to fulfil all contractual obligations on the timely delivery of finished products to the clients. The statistics collected by MDCplus for machines with similar characteristics were analyzed and the load was redistributed among them. At the same time, some of the machines with the lowest performance rates were unloaded completely. The company managed to quarantine 25% of work and maintenance personnel with a backlog no higher than 8%. 50% of the management staff could successfully monitor the operation of the equipment while at home.

The system makes it possible to collect and analyze equipment operation statistics and to motivate staff to improve their performance rates, even at the implementation stage.

For example, the average increase in the equipment load factor amounted to about 15%, the share of organizational downtime has been decreased by 33%.

In addition, the integration of MDCplus with the existing ERP and MES will help to reduce the cost of machine hours in the near future, since all the work carried out on the machines will be identified and tied to specific calculations instead of being calculated in a simplified form as before.

Also, the integration will make it possible to send tasks to machines and receive feedback on manufactured products promptly, which will, in turn, ensure a fairly accurate picture of production for timely planning.