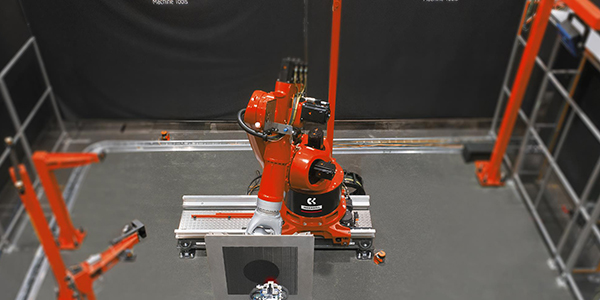 Ingersoll Milling Machines, Ingersoll International’s Rockford, Ill.– based manufacturing facility, is on quite an upswing these days. In 2002, IMM received a multi-million dollar order from Lockheed Martin Aeronautics Co. for five wing/fuselage drilling machines. Delivery is scheduled for fourth quarter 2003.

The machining systems will be used in manufacturing parts for the F-35 Joint Strike Fighter, drilling fastening holes in wing skins and fuselage structures at speeds up to 9,000 rpm. The machines will be outfitted with the latest computer controls for 6-axis automated operation. The two largest machines are 70 feet long by 20 feet wide by 28 feet high. The F-35 is the next-generation strike aircraft for the Navy, Air Force, Marines and U.S. allies. Together, these services plan to purchase approximately 3,000 aircraft. To gain work on the highly competitive F-35 program, suppliers must prove that they offer “best value,” a combination of quality, affordability and technical capability.

Ingersoll Milling Machines are at work the world over making important products from cast iron, steel, aluminum, titanium and advanced composites. Ingersoll Milling serves the automotive, construction, agriculture, power generation, and primary metals industries worldwide. But in no other industry is IMM’s 112 years of experience as acutely felt as in the aerospace industry and the new JSF contract bears that out. Ingersoll Milling was one of only two companies in the country with the know-how to supply Lockheed Martin with the machining systems requested.

The 2002 edition of the famous International Manufacturing Technology Show provided IMM with another forum to demonstrate its skill for manufacturing products with aerospace applications. Attendees of the trade show were treated to a sneak peek of IMM’s latest generation Automated Fiber Placement Machine. Ingersoll Milling’s AFPM is used to manufacture immense, lightweight structures out of high-tech composites. What’s unique about the new AFPM is that it can place material completely over the end of a part rotating on the centerline of the headstock and tailstock, making it possible to create these structures complete with integral domes. This “domes on” capability is currently not available on any other fiber placement machine in the world.

This year Lockheed presented IMM with a special award honoring the IMM team for efforts that “exceeded expectations and enabled the successful acceptance of an advanced automated fiber placement machine on schedule, in budget, and to specification.”

RigiDyne™
Ingersoll’s next-generation AFPMs weren’t the only new products featured prominently at IMTS in 2002. The patented RigiDyne™ 40,000-rpm Hydrodynamic Spindle system for high speed machining was another new IMM development unveiled at the trade show. RigiDyne’s unique motor drive is completely separate from the spindle, which features only seven main parts. The lightweight, quick-change spindle can be switched out in less than five minutes, and at just 34 pounds, the spindle is light enough to be shipped via express mail for service. The turnaround time for spindle rebuilds is only one week, reducing the investment in spare spindles and downtime for spindle repairs.

The RigiDyne system has numerous applications. The combination of the 40,000 –rpm spindle and the plus or minus 45– degree A&B-axis head provides the highest possible productivity for shaping soft metal components. The automatic spindle changing capabilities and the 90-degree C-axis spindle unit also allows for 5-sided machining. Moreover, RigiDyne’s special spindle units provide up to 100 Newton-meters of torque that can accommodate various processes and materials.

Ingersoll Contract Manufacturing
For more than a century, Ingersoll’s name has been synonymous with quality machine tools. The same capabilities used to produce IMM’s highly complex equipment is now being placed at the disposal of industry Ingersoll Contract Manufacturing in Rockford, Ill., has the ability to machine large precision parts up to four-and-a-half meters in width and weighing up to 80 tons.

Ingersoll Contract Manufacturing offers customers a large parts contract manufacturing capability that few job shops anywhere in the world can match. On any given day, everything from truck engine blocks to locomotive engines to huge turbine shells are being produced for customers. Some customers come to ICM for the development of prototype parts. Others are looking to test advanced machining concepts as a way of reducing risk before investing in new, multi-million dollar machines. Still others ask ICM to produce engine blocks in large quantities while waiting for new machinery, or to accommodate special customer demands.

Recently, ICM received approval to ship an assembly of complex five-axis parts manufactured for the National Institute of Standards and Technology. The prototype part, known as the Neutron Monochromator Drum, was completed more than four months ahead of schedule. It’s an integral part of a new state-of-the-art triple-axis spectrometer, an upgraded model of an instrument currently in use at the NIST Center for Neutron Research. Because of the manufacturing expertise demonstrated in completion of the initial part, NIST has already awarded ICM the second option of a potential four-part contract worth more than $3 million. Whether its IMM’s special machines or ICM’s quality contract services, according to Bawinkel, “we’ve been there in the past for our customers, and we’ll continue to be there for them in the future.”