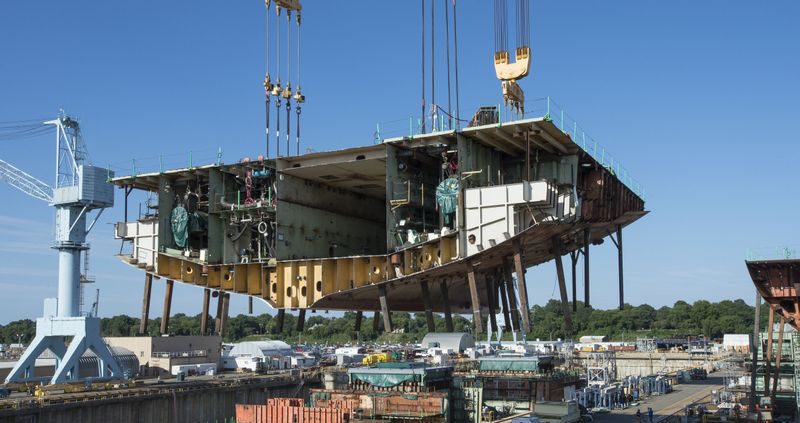 As America’s largest military shipbuilder, we pride ourselves in the best quality manufacturing, and we count many military families among us—meaning that our own family members are among those who rely upon the ships we build. Between Ingalls Shipbuilding here in Pascagoula, Mississippi, and Newport News Shipbuilding in Virginia, HII employs nearly 37,000 people.

What matters most to me is my team. These skilled, trained craftsmen and women are undertaking one of the most complex engineering feats in the world—constructing ships for the U.S. Navy and Coast Guard that generally have a 40-year life span. It is as much an art as a science, where the crafts must work together in every task they do. It is a difficult and physically demanding line of work, but when you have an opportunity to collaborate alongside people who are the best at what they do, it is awe-inspiring. We all take incredible pride in knowing that this work cannot be done anywhere else in the world, and everything we design and build will help protect the men and women who protect us. It’s a noble mission.

It’s a captivating industry. Ingalls’ 11,500 shipbuilders work in often-harsh weather conditions on 800 acres along the Pascagoula River. The company is the largest manufacturing employer in the state of Mississippi and has almost 2,500 suppliers in 47 states.

This massive operation requires the coordination of hundreds of skilled pipefitters, welders, electricians and engineers. On the best of days, I find myself climbing through tanks and compartments on one of these enormous ships. I’ve been here for 20 years and currently lead the team that is responsible for all program execution and financial performance of the portfolio of ships built by Ingalls. With almost 9 million total parts issued and a multitude of skill-sets needed to build these ships, there is constant stress to orchestrate endless moving parts. But I love it. Shipbuilding is a tremendous team effort, and I want to be challenged as an individual. I want to be fearless!

I was one of approximately 25 students to graduate in naval architecture and marine engineering in my class at the University of Michigan. When I first came to HII from the Great Lakes, I spent several years as a naval architect, running analyses and supporting various evolutions and even business development for a period of time. This experience provided the foundation for my current job, with profit and loss responsibility for more than $2 billion in current production.

Manufacturing—and particularly shipbuilding—are difficult careers, but I think there’s a renewed sense of both recognition and commitment to their importance to our country. Ingalls is the essence of what “Made in America” is all about. That’s one reason we are investing heavily in our workforce. HII recently re-built two state-of-the-art apprentice schools to continue efforts to develop and retain talent, collaborating with local colleges to expand educational opportunities. It also opened two on-site, full-service premium health care centers for our employees, and our president and CEO, Mike Petters, donated his entire salary to set up college and pre-K scholarships for the families of employees. HII believes that only by investing in our skilled workforce can manufacturing advance and grow in this new environment.

I’m in it for the long haul, and the dedication, patriotism and gratitude for my team and my company make every day worth it.

Kari Wilkinson is the Vice President, Program Management for Ingalls Shipbuilding. Named to this position in May 2016, Kari and her team are responsible for all program execution, financial performance and solicitations of the portfolio of ships built by this division of Huntington Ingalls Industries, the nation’s largest military shipbuilder.

Kari began her career with Ingalls in 1996.  A native of Jenison, Michigan, Kari graduated with a Bachelor of Science in Engineering in Naval Architecture & Marine Engineering from the University of Michigan.