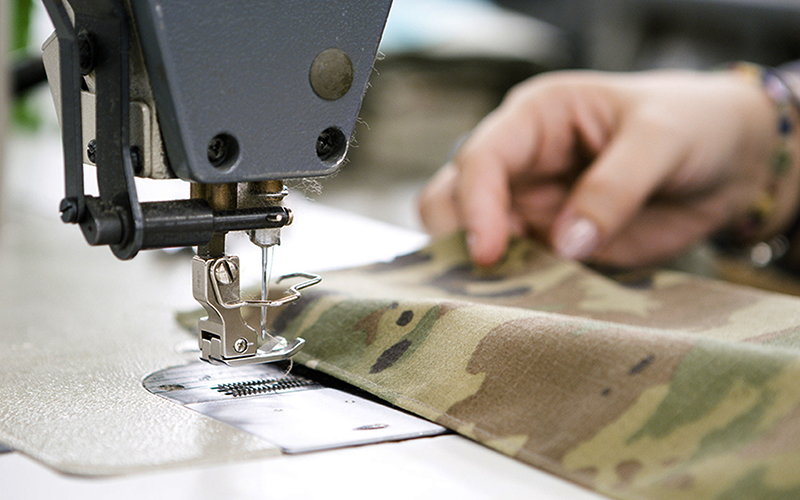 Today, instantly recognized for its Army Combat Uniform trousers, the company has had to fight for survival through industry vicissitudes. Reuben Ford discovers how it takes more than tightening your belt to maintain success, and reveals a strategy for success.

It is an understatement to say it has been difficult for US military apparel manufacturers the past few years. The industry faced several obstacles, including significant troop reductions and slashed military spend, as the DOD and the Administration worked through the challenges presented by sequestration and budget cuts. Sudden changes in operating tactics were necessary to survive these challenges. Fortunately for one of the frontrunners, Bluewater Defense Inc., its experience and agility helped it overcome the downturn. As the company celebrates its 30th anniversary this year, it finds the battle scars of the past eight years have, out of necessity, shaped it to become one of the most forward thinking and innovative manufacturers supporting the Department of Defense supply chain.

Survival of the Fittest

Serving the nation’s most demanding customer is no easy feat, and Bluewater Defense is a professionally run outfit focused on producing labor intensive, sewn items that satisfy the most stringent military specifications. Its evolution has required discipline, drive and investment. Director of Business & Program Development, Kyli Hanson, explains some of the important changes that have shaped the company’s history.

“After 9/11, defense spending in the US skyrocketed and everyone supporting the industry saw increases in contracts…the industry changed across the board.” Bluewater Defense was no exception. Back then, it was a small minority- owned 8(a) business living off small government contracts; when presented with this surge, like others in the industry, the company rapidly expanded, going from one plant in Caguas, Puerto Rico to five plants spread across the Island, and increasing its employees from 500 to 2,200. Suddenly, the company was producing numerous and varied products for the US military – 100% made in the US.

Between 2009 and 2010, however, crisis began to hit the industry. The federal government began to implement drastic spending cuts and slashed the number of military contracts, resulting in many companies, large and small, becoming casualties of one of the largest downturns in the history of military spending. How did Bluewater survive? Hanson explains, “We tried to get ahead of the game. Our leadership recognized the industry was about to experience a significant contraction and if we didn’t change our operating structure and focus, we would become another casualty of the downturn, this understanding allowed us to anticipate the changes that were in store.” In 2009, Eric Spackey assumed control of the company as President and CEO. Spackey certainly appeared at the right time. As a data-heavy, experienced professional from the Telecommunications Industry, Spackey knew of the cyclical nature of the industry and was aware of what was about to happen. “We weren’t caught by surprise,” confirms Hanson. “We became more efficient, shedding-off all excess operating expenses. Damage control at Bluewater Defense consisted of downscaling operations, and steering the ship in the right direction, rather than allowing the ship to sink. This included laying off nearly 1,800 employees, consolidating our manufacturing operations to one campus, moving from a high fixed cost business to a mostly variable, narrowing our focus on specific contract work and changing the company culture to focus on quality and customer service.”

As Hanson calls it, this was “survival mode.” It was a period characterized by self-analysis, introspection and pain. “We asked ourselves: How can we continue to operate in light of this government trend and 19th century manufacturing technics in an industry in decline?” Bluewater Defense used the downturn to change the Company culture, this was first and foremost. Spackey focused on professionalizing the business – reorganizing the management team more than once, rewriting company manuals and procedures, including quality control, and removing duplicate processes – becoming ISO certified and reinforcing the Company’s Mission Statement: “To produce the Highest Quality Product, On-time and on Budget”. Along with professionalism, the key drivers were efficiency and customer service. Although Bluewater lost millions of dollars over the proceeding five years, it was able to survive because of the actions taken and the support of its DoD customer(s). 2014 represented the “low water mark” for the company, however, the long process of evaluation and recalibration was over and Bluewater Defense had not only survived, but was stronger because of it.

Since 2014, Bluewater Defense has grown and strengthened its fiscal position. Hanson confirms, “In 2016 the company returned to profitability.” Revenues for the year exceeded $72 million and 2017 looks to be a better.

Today, the company is the largest producer of Army Combat Uniform (ACU) trousers in the US. Bluewater Defense manufactures trousers for four different uniforms under one contract, reaching 1.5 million a year in 2016 (a figure that has quadrupled over the last four years). Despite the trousers being the largest contract, or “bread and butter,” as Hanson describes, the company supports other products. Over the life of the three ACU contracts, Bluewater Defense has manufactured eight million units including coats and trousers. It also produces a variety of other items such as a 4-way stretch Underway Battle Dress Uniform, cold weather socks, vapor barrier socks and sealed linebacker jackets.

Bluewater Defense currently employs 525 people and operates on a five-building campus located in Corozal, Puerto Rico. The 73,000-squarefoot facility, with immediate access to extra space, has the capacity to increase the workforce to 850. Consolidation into this facility allowed the company to significantly reduce costs and manufacture more efficiently. In order to remain a small business, Bluewater Defense leverages sub-contractors to help manage its growth – these contractors are required to have the same ethics, integrity and focus on quality to work seamlessly with the company and its customers. As a result of its restructuring its business model, Bluewater Defense has the ability to produce approximately 200k trousers/month with its current operating structure, while still remaining a small business.

The campus model enables Bluewater to operate a more flexible production operation, subcontracting, if necessary, and leveraging fixed costs related to cutting, planning, engineering and technical support. The 1.5 million trousers manufactured last year were not all produced in-house; approximately 25% were subcontracted through a carefully developed network that generates a better sales margin along with important partnerships. “We identified the model needed to change and we happily collaborated with competitors; sharing a small piece of the pie is better than no pie at all” Hanson says.

Partnering with other suppliers is presenting opportunities across the board. Currently embarking on a new relationship with Viking Life Saving Equipment, Bluewater Defense will be producing quality firefighting apparel Made in the USA. “The partnership, which effectively makes Bluewater Defense Viking’s arm in the US, provides us access to a logistics network and additional markets,” explains Hanson. Similarly, Bluewater Defense has agreed to a contract with New Balance to produce tracksuits for the US Naval Academy. The Company recently invested in a very exciting Montreal based startup, “Butler Boots”, which will enable it to diversify its production portfolio further. This step into the commercial market is an important economic development: the infamous “race to the bottom” in the military apparel industry has seen underbidding for new contracts and profits dwindle. Diversification of the product portfolio now allows the company to transfer skill sets it has acquired in manufacturing military items into other market segments.

Apparel of the Future

Although apparel manufacturing, and the textile industry as a whole, has changed very little in the last 40 years, Bluewater Defense has made important investments in technology. In the last five years, the company has purchased over $3 million in new automated machinery and production software. Of 1,800 machines, more than 25% are computer programmable and fully automated. Hanson recognizes that “the sewing process is still very manual, with an operator behind each machine and no one’s changing that,” but she is excited about the prospects of robotic sewing and the application of technology to apparel in the future.

In association with his work as Chief Marketing Officer of MIT’s AFFOA (Advanced Functional Fabric of America) Institute, Spackey positioned Bluewater Defense to play an integral role in the development of intelligent garments, such as those that can absorb and store energy or communicate. “The Institute is turning fibers/fabric into the new software,” she explains. AFFOA brings together producers, innovators and different arms of the supply chain, uniting brain power, access to capital, distribution channels, brands names, etc.” Hanson adds “…apparel that incor- porates cell phone technology? That is the direction Bluewater Defense is heading!” “Focus on the Future” is an important part of Bluewater’s strong market presence. One of the company’s strong differentials is its active involvement in the industry, maintaining a “hands-on” approach to its advancement.

The company is currently in negotiations for a new facility in North or South Carolina for prototyping and small scale production that will bring it closer to its customers and experienced labor force, and Hanson is “excited” about potential new legislation under President Trump, “More people are asking that products be made in the USA, and bringing apparel production back to America will be huge for employment. With serious automation, Apparel manufacturing is now more viable in the US, and is low-hanging fruit for job creation, because it’s still a very labor-intensive industry.” If you consider the prospect of manufacturing federal and state government uniforms in the US (currently manufactured abroad), this presents even greater job opportunities at home.

What we have learned is that Bluewater Defense is a small company with a BIG VOICE. The company speaks out to customers and partners to provide tangible, technological solutions. Not only is Bluewater Defense an important contractor for the US government, with proven capabilities in handling high volume production, but appears to be an instrumental player in the industry’s continued evolution. Bluewater is prepared for a bright future.