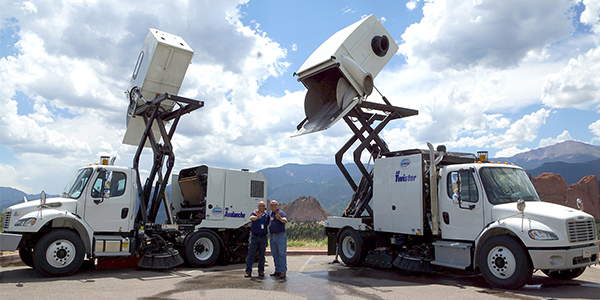 Many of the inventions in the world have been born out of a single thought: “There has to be an easier way.”Such was the case with Schwarze founder Bob Schwarze who was watching someone hand pick trash out of a parking lot one day and thought, well, that there had to be an easier way. His notion was that air conveyance could be utilized to make a clean sweep of the littered parking lot. He came up with the SuperVac and, by and by, as he was putting his invention to use one day, a person came along and thought it was a pretty nifty machine and asked him where he got it. Well, in fact, Schwarze had built it. So he was asked to build one for this person and the next person and eventually Schwarze was on a roll. The company, celebrating its 30th anniversary, is now the largest parking lot sweeper builder in the world.

“We are one of the major players in the U.S. market,” says Raymond Massey, sales and marketing. And because of this Schwarze is also in a position to take a leadership role in many trends occurring in the industry – among these are the PM10 regulations imposed in California. Schwarze has made sure that its machines meet the criteria for the Southcoast Air Quality Management District in California, among the strictest in the country. “A PM10 particle is basically the size of a hair split seven times,” Massey explains. “Our machines are able to pick up a particle of that size.”

“Back in the day, clean really wasn’t clean,” Massey explains. “If you took a street sweeper over a test area prior to sweeping you had 60 percent more PM10s on the roadways. Now with regenerative air you have 60 to 80 percent less PM10s. The new technology takes up the process several levels.”

Noise abatement
Another big issue at the fore involves noise, as street sweepers traditionally have emanated enough noise to wake the dead. Thus, Schwarze invented the WhisperWheel fan system, which is standard equipment on all Schwarze air machines, from its 3-yard, industry-leading S-series parking area machines to its massive 8.4 cubic yard A7000 regenerative air sweeper that is becoming the defacto standard for U.S. road sweeping applications. “What we’ve done is reduced the decibel level on an ambient scale of over 70 percent, which allows machines to be used throughout the night, reducing the air movement that creates the noise,” Massey says. These machines also have 7 percent more power, while using 20 percent less fuel than previous models.

All machines incorporate the best in recirculating/regenerative air sweeper technology and are the end result of more than a quarter century of the company’s applied design expertise that includes Schwarze’s breakthrough technologies such as its exclusive new Mechani-Pneumatic PowerhoodSM, an available option on both the Schwarze A8000 and A7000 models of air sweepers. The central feature of the patent pending Powerhood is a windrowing mechanical broom positioned ahead of the blast orifice of the sweeping head. Because of its unique patent pending design, heavy debris is scrubbed from the pavement surface and, at the same time, augered toward the intake side of the sweeping head. This allows for a dramatically better cleaning action of both heavy and fine materials, which are known to be trapped under caked debris.

All regenerative air sweepers are equipped with Sweeps-in-ReverseSM, a capability that is a Schwarze air sweeper hallmark.

Cleaning up
Other products include the M5000, which came from the venerable Murphy Broom line of sweepers. But in the years since Schwarze purchased that design much has been improved and updated. The M5000 offers a floating main broom for clean pickup, casters instead of skids and commercial chassis mounting. The M5000 is also a durable machine ideal for milling machine cleanup as well as a variety of road sweeping applications.

Another model, the M6000, can handle the toughest sweeping challenges with ease, cost-effectiveness and longevity. The sweeping system is modeled from the M5000, however the M6000 offers a host of additional capabilities. The most significant is that it is available with either a single engine (World Transmission) or a Deutz auxiliary engine that handles the sweeping functions. In addition, the M6000 may be mounted onto a variety of cabover and conventional chassis, and a CNG-powered model is offered as well.

The model M6000 offers side dump offloading that may be varied from 16 inches to 11 feet 6 inches, which is high enough to empty directly into a highway hauler with sideboards. Commercial chassis mounting and Schwarze’s legendary ease of use assures quick operator training and excellent sweeper longevity. The Schwarze M6000 has been designed and quality engineered to handle the toughest sweeping projects.

The company’s S series features the S348-LE machine with mounting on a cabover chassis and the latest design of the Whisper Wheel fan system. The sweeper is a diesel/diesel configuration, and offers a shrouded, high-dumping, 3.7-cubic-yard hopper that is made of stainless steel. Included with the sweeper is a specially designed spare parts package. In addition to heavy-duty parking area sweeping, the S348-LE is also an excellent choice for medium-duty construction sweeping and for meeting the needs of parks and recreation agencies, universities and other places with many areas to clean. The Schwarze S348-LE sweeper is backed by a five-year limited warranty, and has been certified for small-micron pickup capability by California’s South Coast Air Quality Management District.

In addition, the Schwarze RoadHawk offers unique capabilities not found in any other highway pickup machines. The RoadHawk can be operated to increase efficiency and worker safety in a variety of situations and uses a patented pickup system that involves rotating rubber fingers to pick up most all large roadway debris. It is ideal for increasing worker safety during Adopt-A-Highway bag and traffic cone pickup. It also works great in front of a standard highway sweeper, either mechanical broom or air, to take care of objects large enough to damage even the largest traditional street sweeper. Power for highway speed transport as well as pickup function is provided by a durable Cummins diesel.

Customer driven performance
Schwarze, Massey maintains, is a company that prides itself on the performance and durability of its machines. In its Huntsville, Ala., location the company manufactures “for everyone who drives on the right side of the road,” Massey says, which amounts to 19 different models. In Brisbon, Australia, Schwarze manufactures six models for left-side road drivers.

The company’s operation received a boost in February 2000 when it was purchased by The Alamo Group, which gave Schwarze the opportunity to grow and expand and enabled it to purchase two leading brands: Road Patcher and Spray Patcher – the former developed the velocity fill patch technology to fill potholes with a 92 percent compaction rate, which entails blowing the fill into the hole. “This is a developing industry,” Massey notes, adding that with the expertise and know-how now acquired, Schwarze is poised to make in roads into this burgeoning segment.

But technology would mean nothing without the customer service to back it up and this is where Schwarze excels. With its national dealer network and trained personnel, Schwarze enables quick response to problems. “If a machine is down, it’s not creating revenue,” Massey says. This approach, coupled with its development of machines that have set standards in the industry, have allowed the company to achieve consistent growth. “We are a customer driven company,” Massey attests. “Our customer service is unequalled.”