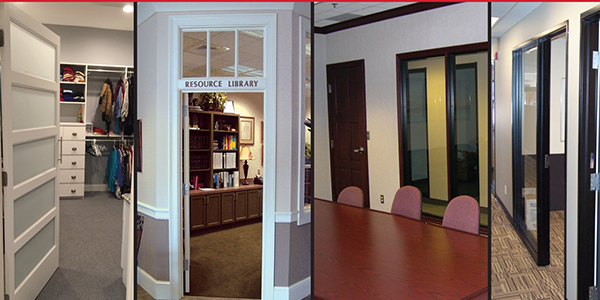 Robert Theune, president of Dunbarton Corporation, talks about the business with the enthusiasm of a very confident marketer. And so he was for eight years as Dunbarton’s vice president of sales until he stepped up to his new post in April 200l. Now, Theune extols the attributes of the two product lines – Rediframe® steel door frames and Slimfold® doors – by focusing on how they meet customers’ requirements. “We listen to the customer. We take the creative initiative in solving customers’ problems. Then we do it – we make the products they need.”

Theune explains that Dunbarton’s manufacturing operations are geared to respond to very specific criteria. “The measurements we deal with vary from a 32nd of an inch to a 64th of an inch, and the specifications can include everything from hinge preparation to lock sets. In 8,000 to 10,000 frames, there may be up to 250 configurations we create.” An overview of Dunbarton’s two lines suggests some of those variations.

Door-to-Door
“Slimfold is the foundation of the company, but 2002 will be the second year that frames will outsell bifolds, about 58 percent to 42 percent,” Theune states. “We will continue to see this trend because we are doing more with frames. We have a small portion of a large market, so that’s where the growth is. This growth is coming from architects, engineers and developers who are looking for value – lower cost and higher quality.”

Theune describes frame product features by emphasizing their value. For starters, he says that Rediframe products cut costs because the prefinished frames do not have to be painted at the site. As for strength and security, he points out that the frame sleeves the wall and becomes part of the wall system.

Fire rating is an area where Dunbarton takes initiative. Theune explains that “Code says a fire wall should be a 90-minute safety for containing the fire.” Rediframe products passed stringent tests to earn the Warnock Hersey standard in both neutral and positive pressure fire ratings. Major Rediframe innovations include the adjustable strike, a patented casing corner bracket that holds miters tight and true, the Universal Hinge Prep with hinge emboss for template and nontemplate hinge patterns, and kerfed frames that fit weather stripping.
Mindful of aesthetics, Dunbarton augments its standard offering of white, off-white, black and brown finishes with custom colors for large orders. Two large paint lines (the chain on one is a quarter mile long) are used for electrostatically applied paint systems, and two ovens are fired up to bake the finishes.

Opening New Markets
Discussing the latest frame enhancements, Theune says the Rediframe S56 as “a hot new product” introduced in February 2002. “This steel frame sleeves over the top of the wall, is screwed or nailed to the steel stud, and has a snap-on trim that looks like Colonial wood.”

“An installer’s dream” is how he describes the adjustable strike emboss unveiled in January 2002. “Sometimes the 4 7/8″ strike lock set on plate on a frame doesn’t fit, so the installer has to grind the strike plate to make the door close tight. With the adjustable, the frame is indented to take the strike plate and hinges, so the door closes tightly.” Finally, Theune discusses the Achiever™ line, which incorporates RediTuff™ 24-gauge steel frame with vinyl coating, kerfing, friction-fit weather stripping and a steel-clad door with a high-density polyurethane core that provides high insulation value. “We came up with a frame that solved a problem and patented our solution – the RediTuff frame. And the industry needed a prehung door. Now, this is a new product line for manufactured housing.”

RediTuff has earned its reputation by putting steel door frames into manufactured housing. Naming its major client in this market, Theune says, “We’re pleased to have Cavalier Homes as a customer.” He explains that the line, which was in development for seven years, offers the benefits of no warping, splitting or cracking – all of which lower dealers’ costs by reducing the number of service calls.

Future Portals
Dunbarton Corporation began as the Ternes Steel Company in Detroit, Mich., in 1946 and started manufacturing bifold doors in 1955. The manufacturer was purchased in 1970, door frames were added to operations and bifold door manufacturing was moved to Dothan, Ala. In 1997, new owners named the plant Slimfold Door Company and formed the Dunbarton Corporation. Dunbarton acquired Rediframe Products in 1978.

CGF Industries, Inc., a financial holding company and the current owner, acquired Dunbarton in 1986. Now a $30 million corporation, Dunbarton employs 225 people at its two locations – the original 125,000-square-foot facility and a new 125,000 square-foot facility. Distribution is through a network of wholesalers and distributors who carry stock for quick delivery.
Looking to future thresholds, Theune says, “I can see the business doubling in the next five years. I see our major market East of the Rockies, but there are opportunities out
West too.”

Considering that two of the Dunbarton’s largest orders were 13,000 door frames for Mandalay Bay and 11,000 for The Venetian – two luxurious hotel casinos in Las Vegas – that seems like a winning pronouncement.