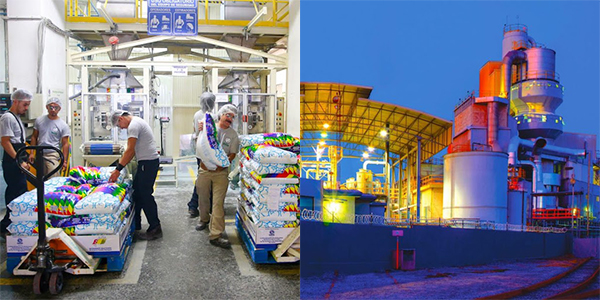 Keeping priorities straight is one difficult goal to achieve in business but the only way to guarantee success. Those priorities might require constantly updating technology and safety, and maximizing resources. This is the route Detergentes y Jabones Sasil has chosen because it has proven to work.

Jabonera Guzmán, a soap and personal care products company founded by a family from Monterrey with simple domestic technology, was established in 1959. The increasing market demands and competition with foreign corporations soon left the company behind. In 1984, within an effort to regulate the consumer’s product market, Jabonera Guzmán was acquired by the federal government and run by Compañía Nacional de Subsistencias Populares.

In 1990, it was sold to a group of private entrepreneurs and the commercial name changed to Detergentes y Jabones SASIL, S.A. de C.V. The company started producing and marketing household detergents and soaps. Soon, Sasil became part of a group of companies doing business in industries such as plastics and films, fertilizers, real estate and others.Bruno Aviña, general director, had an instrumental role in the recovery of the company’s direction. With the assistance of the board members, Aviña has taken Sasil to a leading place in the Mexican market, competing with international corporations such as Procter and Gamble and Henkel. “This is a very challenging market. In an industry that produces over one million tons a year in products, we have a market share of 7 percent, which positions our company in fourth place,” said Aviña. It can seem like a small market share, but the numbers add up. Procter and Gamble and Henkel cover 55 percent of the domestic market, while Fábrica de Jabón La Corona, in business for more than 100 years, has 25 percent market share. Sasil’s share represents over 70,000 tons of products with revenues rounding $45 million a year. These impressive results were achieved in less than 15 years.

MAKE OVER
When Aviña’s group purchased the company in 1990, the equipment was obsolete, the production was inefficient, and the productivity low. It took the company four years to reach present standards. “We purchased Italian technology which is the most advanced in terms of production process and safety systems. We can proudly say that Sasil is the most modern facility in its industry in México,” said Aviña.

The production of detergents is a hazardous process that involves handling sulphur and other chemicals. Sasil’s equipment follows international safety standards that allow the company to be located in the middle of a city without risks. It attained ISO: 9000 certification to comply with international standards and just recently installed a system to redirect the vapors produced in the process in order to maximize the use of energy.

The facilities include a sulphonation plant, a detergent production plant, and packing and bottling facilities, covering 12,000 square meters. The sulphonation plant produces two tons per hour, currently working at 90 percent of its capacity. The company is in the final stages of updating its powder detergent plant, which was producing six tons per hour, and is now aiming for 15 tons per hour, working at 65-percent capacity. The plants work three shifts, 24 hours a day, from Monday through Saturday, producing an average bulk of 6,000 tons per month. Commercial suppliers for Sasil are Ballestra, Massoni and Oficine Meccaniche Gallaratesi in Italy, Cooper Natural Resources, I.M.C. Chemicals, and Sasol North America in the United States, Daewoo International in Korea, and Payper from Spain.

SHIFTING MARKETS
“The Mexican market preferences in this type of product have changed. There has been a shift from using powder to liquid detergents, and we have been able to keep up with it. We have increased manufacturing, and we are marketing this type of product nationally and in several regions of the United States where Latinos, and especially Mexicans, live,” said Aviña. Sasil has launched a complete line of laundry detergents for white, color, and black clothes.

Sasil’s products are very price-competitive. The company is a provider of brand name products for large domestic chains such as Great Value for Wal-Mart, House Care for Gigante, Economax and Hill Country Fare for HEB, Chedraui for Chedraui, and Ley for Casa Ley. It also produces proprietary brand names such as Arcoiris, Premio, Paloma, Traz, Dex and Biosol. “Our products include a complete household line with multipurpose detergents, dishwashers, laundry powder and liquid detergents, softeners and commercial laundry soaps,” added Aviña.

Under the slogan “Asómate a un mundo de limpieza” which translates into “turn up to a world of cleanliness,” Sasil utilizes its resources wisely by marketing its products regionally. “National campaigns are very expensive, and we have had better results in marketing locally where our products can be reached,” explains Aviña. The company utilizes printed media and radio, which is a widely preferred means of communication among the Mexican audience. Sasil targets Latino markets in California, Texas and Illinois as well. From its plant in Monterrey, Sasil delivers its products to six distribution centers with storage facilities covering 10,000 square meters. These distribution centers sell to wholesalers and supermarket chains, and are located in Monterrey, Mexicali, Tlalnepantla, Culiacán, Xalapa, and Guadalajara. Sasil also has a commercial office in Mexico City.

The company’s marketing strategies have also proven to be successful. Sasil attained a growth rate of 27 percent in 2004, and it foresees a 20 percent growth rate for 2005. The main expansion stage is now over, but market consolidation is still a task ahead. “With the upgrade of our detergent plant, we have reached the top capacity of our current plant. We plan to take it to max productivity. In order to expand in the future, we will have to think of building a new plant which will have to be strategically located,” said Aviña.

KEEP MOVING
Sasil’s growth has developed by expansion of its own production. It has had transnational companies interested in its acquisition, but Aviña’s group has a clear idea of its future movements. It established commercial relationships with similar companies in Guatemala, Colombia, Panama and Venezuela. Sasil is planning to continue expansion in the United States with its own brand names as well as products for commercial brands. “Latino markets have shown preference for products they know from back home,” added Aviña.

The strength of this company is the fact that it produces very good products at a competitive price. It serves a population that represents 80 percent of households in the domestic market. “And we proudly say that our technology is the newest in México,” said Aviña. Bringing the company to a higher level has not been an easy task. It took prioritizing, planning and determination, as well as extensive knowledge of the domestic market preferences. Now making bubbles with the big fish, Sasil has achieved product recognition with hardly any advertising, a commercial goal of which many companies only dream.