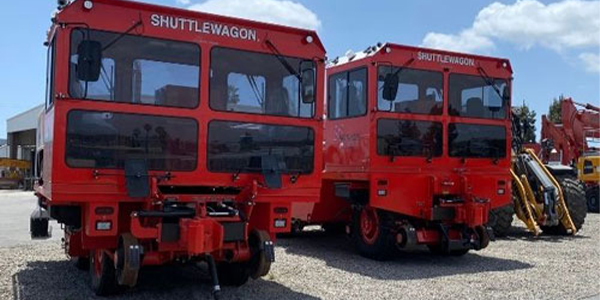 Shuttlewagon-CCP (Central Power Products, Inc.) is in very select company. There’s only three industrial mobile railcar mover manufacturers in the nation, and the Grandview, Mo.-based Shuttlewagon is one of them. Moreover, it’s the only U.S. manufacturer that equips its movers with rubber wheels. The two competitors manufacture steel-wheel movers.

Interesting enough, all mobile railcar manufacturers in the rest of the world – there are about 14, according to Shuttlewagon Vice President of Sales and Marketing Jack Highfill – also utilize rubber wheels. There’s good reason for the global dominance of the rubber-wheeled mover. Compared to steel wheels, rubber wheels provide a higher coefficient of friction, something that determines the pulling capacity of a railcar mover. Specifically, rubber wheels develop 85 percent coefficient of friction compared to the 33 percent developed by steel wheels. As such, Shuttlewagon offers its U.S. customers better pulling capacity.

Moving Railcars
Like most railroad machinery, railcar movers are magnificent pieces of equipment that accomplish a formidable task. Movers are used in rail-switching operations, typically within a plant environment. Equipped with both rail wheels and roadwheels, railcar movers can traverse surface roads and fields on way to rail lines, where they perform their work, which involves the pushing and pulling of railcars, to place them where they need to be. They’re similar to a locomotive, with an operator performing all functions from within a cab.

Typically, steel wheel movers employ weight transfer in moving the railcars, which needs to borrow weight from the connected rail car in order to develop the necessary tractive effort… This transfers added traction to the mover, which helps it move down a rail line. With the Shuttlewagon, weight is directly applied to the rubber drive wheels for traction. “The steel wheel version is essentially a weight-transfer machine,” describes Highfill. “But our rubber wheel movers don’t borrow weight. Rather, we can just back into the railcar, connect up with a standard AAR (Association of American Railroads) coupler and pull the cars without the weight transfer, and that enables the Shuttlewagon to move more load.”

Further describing the difference between the two, Highfill indicates that steel wheels are connected right to the mover’s drive axle and, just like a rail wheel, they go down on the rail and provide the guiding and the powering. The Shuttlewagon’s rubber tire also goes down on the rail. “But we also have a steel wheel that provides the guiding, while the rubber tire provides the traction,” explains Highfill.

Souped-up Pickup
Steel wheel railcar movers were developed in the late 1940s, says Highfill, while the rubber-wheeled version was first developed in the late 1960s and continued evolving in the early 1970s when rubber tire technology made significant advances. The Shuttlewagon concept was developed in response to the rail industry’s need for a mobile rail car mover that possessed greater tractive effort, required less maintenance, and demonstrated improved ease of operation and safety. The earliest version was essentially a converted, commercially available pickup truck. “The bed was taken off, and a steel wheel was attached that made the truck weigh more. A cover was placed on it, and it was hooked to a railcar and moved,” says Highfill.

As the design evolved, steel guide wheels were installed that allowed the truck’s rubber tires to ride the rails. Rubber tires provided the driving force while the steel wheels served as a guide. Power was provided by the engine and the standard transmission. A later upgrade was a stronger chassis that could hold up better than Detroit-built pickup trucks.

In 1985, Central Power Products purchased the product line, changed the original design and improved the technology over the years. In addition, external factors have played a part in the Shuttlewagon’s ongoing development. “Improvements in components such as engines, axles, and transmissions allowed us to continue to increase in the size of our product,” reports Highfill. “This was important, because a railcar mover, in a sense, replaces what a locomotive would do. So, we needed to build bigger and bigger units.”

Central Power introduced significant design changes in 1986 with a larger cab and a new single guide wheel system. At the time, the company offered three models: the SWX25A, SWX35A and the SWX45A. In 1994, the company introduced a completely new line of rail car movers, increasing the number of models from three to eight. In 1999, it introduced the Series B, which had several new features including a lower center of gravity, increased weight, and four-speed transmission.

Shuttlewagon began designing the Commander model in 2001 and finally unveiled the C series in 2005. The four years of development and field tests are evident in the substantial upgrades. Not simply a style makeover, the C series represents a major overhaul. “It encompasses a complete new frame design and change,” says Highfill. “We lowered the machine’s center of gravity further, to get the pull more in line with the coupler.”

The Commander features a full-width cab that can seat three people and includes side-to-side pass-though access, a 360-degree range of vision from operator seats, tinted glass and a tilt steering wheel. “The reconfiguration of the cab was a major change,” says Highfill. “Previously, our cab was long and narrow and set to the left-hand side of the engine, with no visibility on the right-hand side. Guidance was accomplished either by a mirror or with the help of people on the ground. Also, the cab is moved forward, so the operator can see the coupler and rail gear, without having to use mirrors.”

Also added in the cab is a 180-degree rotating operator’s console with multifunction computer display for all vital operating functions. This provides the operator with important information about engine output, fuel consumption, air and hydraulic pressure, and railwheel pressure. It also has diagnostic features to aid in troubleshooting all of those components.

The Commander features a 3-degree cambered railwheel design that improves lateral load efficiency, enabling it to negotiate tighter rail curvature with less wheel climb. It is also equipped with an anti-lock braking system that prevents wheel lock during braking, which keeps rubber tires from sliding along the exposed rail. A dynamic traction control measures railwheel speed and compares it with transmission output. When transmission output exceeds railwheel speed, the engine is automatically down-throttled to prevent the tires from spinning on the rail.

The series’ AAR non-weight transfer couplers use a dense urethane shock absorber to absorb coupler shock loads during coupling and railcar movement. These couplers do not apply any vertical pressure on the railcar coupler, eliminating the risk of lifting the railcar mover free of the railwheel tracks.

From the Ground Up
Shuttlewagon produces its stunning machines at its 70,000 square-foot facility in Grandview. Highfill describes the operation as very efficient. “We don’t use a typical assembly-line process. We fabricate the frames,” he reports. “We’re one of few manufacturers in this industry that builds its frame from the ground up, right here in our facility.” From there, the frames move to a stationary assembly line, where two assemblers put the machine together. “In this way, we put more care into the production of each unit, and it provides better quality control,” comments Highfill.

Highfill says that Shuttlewagon’s customers include any company that ships product or receives raw product by rail, but the main sectors served include industry, agriculture, chemical, intermodal and transit.

As Central Products heads into the future, more customers are climbing aboard as the Shuttlewagon moves down the line. Ranked number two in the field of competitors, Shuttlewagon brings a high standard of quality and continuous improvement to the market. Shuttlewagon models have been increasing in popularity in North America, serving customers who seek an alternative to traditional steel wheel models – an alternative that’s better, safer and easier to maintain. And, according to feedback from customers, the company has the highest retention rate in the industry – by a long margin.