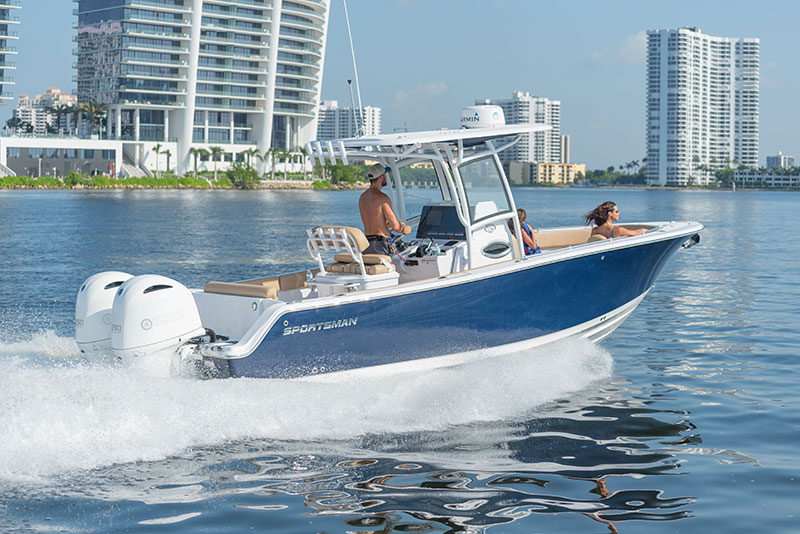 After only seven years in business, Sportsman Boats is one of the top ten manufacturers of center consoles and bay boats used for family cruising and fishing ranging from 21 to 31 feet in length. And even after continual rapid expansion of its Summerville, South Carolina manufacturing facility, Sportsman Boats still can barely keep up with demand.

“It’s a great problem to have, even while it is a problem,” says Victor Gonzalez, marketing manager. “Currently we’re doing about 60 percent of what our potential business could be.”

Sportsman Boats are sold through 22 dealerships in North America, with another four in Australia. “We might like to expand that at some point, but right now it wouldn’t be fair to our existing dealers. We’re focusing on fulfilling their orders.”

A boat is a luxury purchase, and confident consumers are more encouraged to buy during an expanding economy. That explains the overall positive picture for the boating industry as a whole. For Sportsman Boats, which predicts equally rising sales trends in 2019 with some levelling off in 2020, there’s more to incredibly strong market demand for its products than that.

“We are a relatively new company competing against well-established brands that have been around forty years or more,” Gonzalez notes, explaining that Sportsman Boats has made such a powerful splash due to a radical unorthodox approach. “We’re innovative, we’re fast, we build a complete boat from scratch without any hidden cost. And we appeal to a younger demographic. The average boat buyer is 45 years or older. The age of a likely Sportsman Boats buyer starts out at 35.”

One thing that the younger buyer is looking for is a customized boat with upfront pricing. “Typically in this industry a boat’s listed retail price doesn’t have any of the extra features you probably want,” Gonzalez says. “So once you add things like the electronics and engine options and various amenities, that $19,000 boat ends up costing you $50,000. Moreover, these features may be installed by vendors other than the original manufacturer, so you’re dealing with someone else if you have any kind of warranty issues.”

In contrast, Sportsman Boats are built from scratch, priced with all the features included and installed by its own factory-trained technicians. In some cases, Sportsman Boats extends the equipment warranty. One example is the audio packages provided by JL Audio, which would ordinarily carry a one year warranty-an added benefit of Sportsman Boats equipped with a JL Audio system is an extended warranty of three years.

“Buying a boat is not like buying a car. You don’t walk into a dealership and haggle with a salesperson and walk out with a boat like you would with a car,” Gonzalez explains. “Boat buyers typically spend up to a year researching the kind of boat they want before they even talk to a dealer. We make this process a little easier and quicker by providing Internet pricing. There’s no need to request a quote. You go to our website, configure the boat you want, you get it priced exactly the way we will build it for you. We refer that to the appropriate dealer so that when you are ready to buy, all the details are already worked out. Pricing is fully transparent.”

He adds, “This is another reason why we appeal to younger buyers. They’re used to the hassle-free convenience and accuracy of doing business over the Internet.”

A further distinguishing characteristic of Sportsman Boats innovation is that every boat is built from scratch. “It’s another reason why we can offer features and amenities you only see on much larger boats,” Gonzalez says. “You also get a better performing boat.”

The ability to provide full customization in-house is as much a factor as buyer demand in driving the continuing expansion of Sportsman manufacturing capacity. “In our last expansion we added space for our upholstery shop and welding operations. Our goal is to do just about everything under our own roof to attain the best quality and price control over the final product,” Gonzalez explains.

A challenge every manufacturer these days is attracting a labor force with the right skills sets. It’s even more challenging for boat makers. “Another big difference between our industry and the auto industry is you find very few robots. There’s not a lot of automation, and as a custom boat builder, almost everything we do is hands-on,” Gonzalez says. “In particular, finding fiberglass fabricators is a struggle. It’s a tough environment to work in, and it’s not promoted in schools as a career path. To counteract that, we’re working with local high schools to develop people who might have the aptitude and interest in fiberglass fabrication. And once we hire them, we strive to retain them through a company culture that not only rewards them in terms of salary, but promoting innovation and a feeling that they are craftspeople who are an essential part of a unique brand.”

As interest continues to build, Gonzalez says it’s going to be awhile before demand calms down to any extent. “Regardless of what might be going on in the economy that right now seems a little unstable, it’s going to be years before we see any possible negative effects. We’ve made a lot of headway in the industry and with consumers in ta relatively short time.”

Sportsman Boats continues to navigate towards more success thanks to its leading innovation that boaters appreciate and invest in.