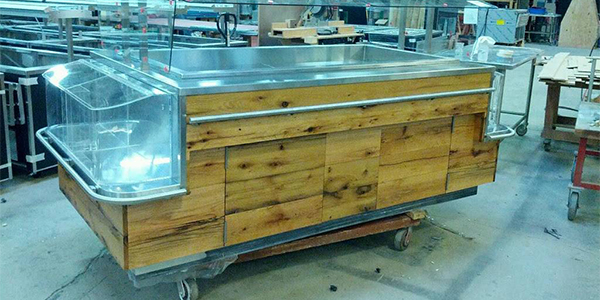 With developments in food-service technology and greater nutritional awareness, “fast food” no longer need be equated with “junk food.” In addition, with an increased emphasis on safety and sanitation in recent years, expedience doesn’t have to mean risk.This is clearly evident in supermarkets throughout the United States. In today’s hectic world, many time-challenged people take advantage of the convenient, fresh and nutritious offerings provided at the salad and food bars located near the produce sections in major chains. Many a business executive seeking a quick lunch or a “supermom” trying to somehow fit a healthy meal into her overwhelming schedule can thank the Columbus, Ohio-based Amtekco Industries, Inc. With its innovative equipment, Amtekco played a major role in pioneering this food-service concept.

According to Bruce Wasserstrom, Amtekco’s executive vice president, the company has served the supermarket business for more than 40 years and has manufactured salad bars for that industry for more than 25 years. During that time, Amtekco has enhanced food accessibility in a way that not only draws more customers but better serves those consumers. “It used to be that when shoppers went into supermarkets, all that was available to them were the packaged meats, cheeses and other items,” Wasserstrom recalls. “They’d take these items home, where they’d have to make their own salads and sandwiches.”

Today, most supermarkets not only provide salad bars; they also provide hot food bars, and Amtekco has been at the vanguard of this trend. “As the supermarket industry grows with its food services, we have grown with the industry,” he indicates. “Today, you can go into and buy a complete hot cooked meal from the supermarket, take it home and eat it.”
Amtekco Industries manufactures standard and customized equipment for the restaurant industry, particularly for the food-service areas in supermarkets and convenience stores. It is among a group of companies known as Wasserstrom Companies, which is also based in Columbus. While Amtekco provides equipment for plumbing wholesale industries, most of its business is geared to the supermarket industry. Its product line includes equipment that ranges from stainless steel sinks to tables and kitchen ventilation systems, retail display cases, mobile refrigerated units and, of course, to food and salad bars.

Working in Wood and Steel
Amtekco manufactures equipment at two sites: a wood fabrication plant and a metal fabrication plant. The engineering departments in both facilities use state-of-the-art technology and programs such as Auto CAD 14 and Cut Planner linked by data lines that keep the plants in continuous communication. In this way, the company carefully coordinates its production offerings.

Bakery and produce fixtures are the newest elements in Amtekco’s line, and they supply company clients with a more attractive way to display food items. “Because these fixtures create a much nicer display on the sales floor, the supermarkets are able to sell more products,” comments Wasserstrom. “It was the same thing with the food bars. How the product sells was dependent on how the product was displayed and how clean the food was kept.”

A Family Enterprise
Amtekco was established as N. Wasserstrom & Sons, Inc., and in its early years, it served as an equipment manufacturer for other companies beneath its umbrella. Its parent company was established in 1902 by Hungarian immigrant Nathan Wasserstrom. Since its founding, it has been a family owned and operated business.

Nathan Wasserstrom was an entrepreneur who had his hand in several businesses. But the biggest catalyst to his success proved to be the country’s prohibition laws enacted in 1919. This forced Wasserstrom to convert a saloon he owned into a soft drink store. In this way, he not only survived prohibition, but he was able to expand his business by opening branch stores in the Columbus area. Wasserstrom and his sons, whom he had brought into the business, also expanded into restaurant fixtures and supplies, wood fabrication, stainless steel and Formica food service equipment manufacturing and office furniture and design sales.

Currently, the company is divided into affiliates that include Amtekco. Other affiliates include the Ohio-based N. Wasserstrom & Sons of Columbus; DCS IV of Phoenix, Ariz. and GEN III of Greenville, S.C. All manufacture quality standard and custom equipment for food service.

The Wasserstrom group of companies also includes Quadra-Tech, a custom designer and manufacturer of specialty smallwares and wire for food service; National Office Warehouse, which offers quality office furniture at discount prices; and the Select Seating Group, which designs and fabricates all restaurant dining room needs, including booths, tabletops, bases, chairs and millwork.

As their evolutions indicate, all Wasserstrom companies and Amtekco have been willing and able to adapt to changing industry technology and requirements. Early on, the parent company recognized and embraced innovations such as bar coding, scanning/electronic data interchange and computerized order entry.

All manufactured products comply with national codes such as UL and ETL and the National Sanitation Federation (NSF) regulations. The NSF regulations, in particular the NSF7, represent a major trend in Amtekco’s market sector. The NSF7 requires that all prep and deli tables keep toppings at 33?F to 41?F. For years, temperatures had been kept at 41?F to 45?F, and cases were designed accordingly. However, concerns in recent years about food-borne illnesses have led to temperature readjustments in the food-service and supermarket industries. Amtekco products are either NSF7 compliant are in the midst or transitioning to NSF7, says Wasserstrom. This way, food products kept out on a sales floor are kept fresher for a longer period of time.

Outgrowing its Facilities
Innovation and adaptation has allowed Amtekco to stay in front of an increasingly competitive field. The recent move toward diversification should also place more distance between the company and its competitors, as Amtekco is expanding its retail fixture product offerings into non-foodservice markets.

Wasserstrom indicates that Amtekco has demonstrated steady growth over the last few years, and he adds that the growth is increasing. As such, Amtekco recognized the need to restructure its facilities to support this growth. “We’re in the process of moving both of our manufacturing plants under one roof in a 200,000-square-foot plant,” reports Wasserstrom, who added that the move began in November 2005 and is expected to be completed in March 2006. “This will provide better communication within our factories, which are now 35 miles apart, better quality and create shorter lead times. It will also enable better communication for our customers.”

Ultimately, all of this will help provide better service to its customer’s customers; that is, the American consumers. Amtekco has already provided them with more and better meal options in an ever-changing culture; it will be interesting to see what the forward-thinking company will impact next.