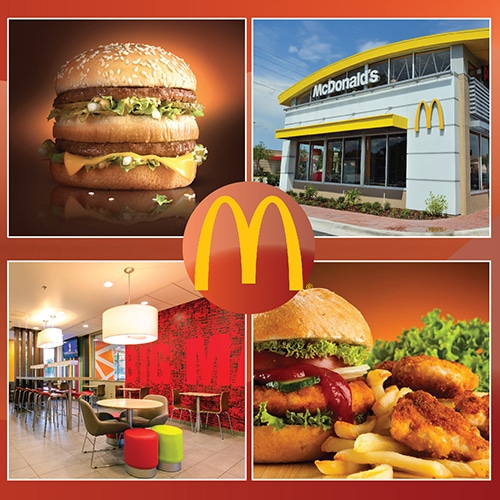 Drive through a city, town or suburb, and the famous McDonald’s sign is dominant on any main thoroughfare. It conjures the eternal wedded simplicity of the burger, fries and soda triumvirate, makes you long for a meal you know will be consistently prepared to the same high standard whether it’s in London or Toledo, and lets you know that under every golden arch is a business culture that has taken command of a very humble premise: To eat is a pleasure derived from knowing that the food is always hot, fresh and tasty, the environment is clean, and the service is friendly.

You understand all that. But do you know today’s McDonald’s? Here is a preview: Streamlined menu simplicity, all-day breakfast, a vow to switch to cage-free eggs and chickens free of antibiotics, and enhanced engagement with customers.

In pursuing a new outlook, McDonald’s has tapped into a bit of its heritage, understanding that its enduring success has always been its ability to mirror the ever-evolving tastes of the consumer. Under the guidance of new CEO Steve Easterbrook, formerly chief brand officer, who took the helm of the most popular quick service restaurant chain in the world on March 1, 2015, employees at McDonald’s have been energized to create a culture that fits with the needs of the 21st century dining public.

What does that mean? To put it in simple, streamlined terms: Today’s McDonald’s is committed to more than offering a meal. It is offering an interactive experience, one that takes into account the serving of delicious food in addition to the quality of each food item and its ingredients.

Healthy Supply Chains
A chief component of the company’s newly formed strategy is a commitment to the health of its customers, and this begins with using suppliers who limit the use of antibiotics in food animals.

Removing all antibiotics from its chicken supply within the next two years and a shift to cage-free eggs in the United States over the next decade are initiatives in which the company is whole-heartedly involved.

In statements, McDonald’s has discussed antimicrobial use in food animals and the need for global organizations like McDonald’s to pay attention to this issue.

“As the body of scientific evidence grows, and scientific consensus emerges, we recognize the importance of continuing to evolve our position on antimicrobial use. In 2014, McDonald’s assembled a team of experts from around the world to study, debate and comment on antimicrobial use in food animals,” according to the company’s statement. “It is our intent to work with governments, non-government organizations (NGOs), veterinary and university extension networks, industry leaders and retailers in roundtables to gain alignment and identify paths forward.”

McDonald’s vision for antimicrobial stewardship is “Preserving antimicrobial effectiveness in the future through ethical practices today.” To achieve this vision:

The company additionally has outlined four criteria to guide its work, to serve as goals for the supply chain:

Such adherence to good policy has to start somewhere – and it begins the moment McDonald’s opens its doors to customers. Along with its pledge to lead global initiatives for healthier food products, the company has re-energized its business in other ways.

Get It While It’s Hot – Morning, Afternoon and Evening
For a company whose resourceful associates helped to gain McDonald’s its fame, breakfast has, indeed, become the most important meal of the day.

In one of its biggest strategic moves, McDonald’s rolled out its all-day breakfast in October, answering a demand for customers who find themselves in the mood for a McMuffin at lunch or dinner time. Make it your new year resolution, the company calls out on its Twitter feed, to eat breakfast all day.

The breakfast expansion is another win for the company whose associates can be credited with inventing the quick-service breakfast menu more than 30 years ago. In particular, legendary McDonald’s franchisee Jim Delligatti, the inventor of the Big Mac sandwich, in 1970 began experimenting with simple breakfast items. Looking for a way to bring more business to his restaurant during the morning hours, he started selling coffee, doughnuts and sweet rolls, adding pancakes and sausage to the menu a year later. With these limited selections, by 1971, Delligatti was already doing 5 percent of his business during breakfast.

But a significant dilemma remained, according to the company’s history: “While Delligatti’s innovation had increased business at his store, other McDonald’s operators balked at the prospect of extending their already-backbreaking 11 a.m. to midnight shifts. Unless a new breakfast item was found that could deliver double-digit sales gains, the McDonald’s breakfast line would have to wait.”

That product, which was to completely transform the McDonald’s experience, came in late 1971 with the vision of a man named Herb Peterson. After managing the McDonald’s account for Santa Barbara, California-based D’Arcy Advertising, Peterson decided to join the increasing ranks of McDonald’s franchisees. Peterson, also seeing opportunity in a breakfast menu, focused his creative energy on launching an entirely new product that could be eaten like the rest of the McDonald’s line: by hand. A solution arrived when he began to modify an Eggs Benedict sandwich that was being marketed by Jack-in-the-Box, a West Coast chain. Peterson combined a slice of cheese with a hot egg, producing the exact consistency he had been aiming for. Since poaching eggs didn’t fit into the McDonald’s assembly line production process, Peterson invented a creative new cooking utensil – a cluster of six rings – that was placed on the grill to form the eggs in the shape of an English muffin. When he complimented the egg and muffin with grilled Canadian bacon, Peterson had a finished breakfast item that was perfect for a sandwich-oriented quick-service restaurant.

Other sandwiches and menu items have come and gone, some with legendary staying power such as the Big Mac, which has its place in restaurant history, invented by the same man who engineered the first McDonald’s breakfasts.

In with the New
The new year for McDonald’s sees the company invigorated with a sense of urgency, with the top priorities to listen to customers, continue delivering the famous and tried-and-true staples of its menu, and honoring a heritage of innovation. There is, indeed, a mindset that has swept out the old, and a willingness to take new risks, all for the benefit of the consumer.

While McDonald’s, serving 27 million customers daily in the U.S., and nearly 69 million daily worldwide, has streamlined its menu of excess that slowed its delivery to the customer, it has added items that are staples in the American kitchen.

For one, it is testing a 4-ounce portion of macaroni and cheese, made from a blend of real cheese, not powdered cheese, which has been sampled at 18 locations in northeast Ohio. While it is too early to tell whether the item will be rolled out nationally, its presence shows the company’s desire to harken back to simplicity by providing a food that everyone can relate to and enjoy.

In addition, the company has rolled out serving of three mozzarella sticks, another favorite in the American diet, nationwide after a successful test in New York.

McDonald’s also has revamped its quarter pounder, toasting its buns longer and increasing the size of the raw patties from 4 to 4.25 ounces. The patties are also seared differently now, to enhance their flavor.

The company has also said good-bye to foods that over-taxed its menu and its delivery of quick customer service; these included the deluxe quarter pounder burger, six chicken sandwiches, and the honey mustard and chipotle barbecue snack wraps. The move has further helped to streamline what the restaurant provides to customers and enables it to concentrate on those items that are the foundation of what McDonald’s is known
for, namely, delicious sandwiches.

Other changes to the McDonald’s menu include:

In Search Of Good Taste
In addition to all of this, the restaurant has fostered an interaction with customers, allowing them to “Create Your Taste” and become a part of their own dining experience.

In line with this, the company solicited recipes in the Chicago area for a Burger Build Off contest last summer. The number of possibilities were endless: Customers could choose among eight kinds of buns, could double or triple the stack of beef patties, opt for kale or a different sort of cheese, feta or parmesan, perhaps. Cilantro lime glaze or spicy buffalo sauce also were options. Customers could create as many burger combos as they wanted, but could only vote on one burg- er each day. Then, 10 finalists moved on to the McDonald’s chef kitchen in Oak Brook, Ill., to refine their recipes and present their burgers to a panel judging on taste, texture, smell, appeal, appearance, size, how easy or difficult it is to prepare, and how it would fit in the McDonald’s food preparation process. Marketability and sales potential of the finalists’ burgers were also judged.

The winners were the “ChiTown Classic” on a toasted Quarter Pounder bun with Canadian and applewood bacon, pepper jack and cheddar cheese, red onions, tomato, mayonnaise and a blend of baby spinach and kale, and the “Rio Crisp” burger, on a toasted brioche roll with tortilla strips, guacamole, pepper jack cheese, peppercorn sauce, red onions and tomato. These two burgers were sold as a limited-time offering at McDonald’s in the Chicago area including Northwest Indiana through Dec. 27.

The burger that sold the most will be crowned the winner and its creator will receive $5,000 and a weeklong trip for four people to Universal Orlando Resort including round-trip airfare and hotel accommodations.

Allowing customers the opportunity to participate in their own burger creation has set McDonald’s a part from its competitors. Building a burger also builds interaction, and sustainable relationships. Sticking to its QS&C fundamentals of offering hot, fresh, tasty food; fast, accurate and friendly service in a clean and inviting environment, McDonald’s has succeeded at breaking down a barrier between the back and the front of the restaurant, something few companies can boast.

At its new CEO leads McDonald’s through an era of cultural change, Easterbrook, in a New York Times interview, praises the talent within the company, and the speed at which employees have embraced McDonald’s renewed urgency.

Running “better restaurants and consistently” is a rallying cry that has grown loud and strong at McDonald’s, a company, through innovation and commitment, that will continue to maintain its position at the vanguard of the quick-service food industry.