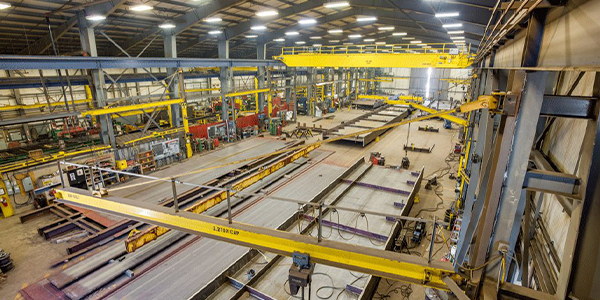 In the early 1980s, a lot of people in the world of industry were talking about the rise of computers and how they would revolutionize business. But a leading Canadian-based steel fabricator, Supreme Steel Ltd., did a lot more than just talk about the new technology.

Kevin Guile, the production manager for the company that is based in Edmonton, Alberta, said that Supreme Steel purchased computer software to aid in its design work back in 1981, well ahead of most of its rivals in the fabrication industry. What’s more, he said that Supreme Steel then made so many changes to the source code – adapting the computer technology to its own purposes – that the software maker “told us they would no longer be able to support us.”

Over the last quarter century, that technological edge has played a key role as Supreme Steel has had a hand in practically every major steel project in Western Canada and many in America’s Pacific Northwest as well. The company has fabricated for and erected large public works projects such as hospitals and sports arenas and has also supported the region’s industrial growth, particularly in the areas of mining and oil and gas exploration.

A high-tech innovator
Not only has Supreme Steel long been a leader in the use of 3-D modeling in its computer design, but Guile noted that the company uses software that facilitates electronic data exchange with its customers, which speeds that design process by promoting easier interaction.

The cutting edge approach to what some view as a rather staid industry is what has helped Supreme Steel to grow steadily, both through organic growth and a series of acquisitions, since it was founded in 1972, despite a series of ups and downs in both the steel industry and in the economy of western Canada.

Today, the firm, the largest privately owned steel fabricator in Canada, employs roughly 500 people at some seven locations, including six in western Canada. More importantly, Supreme Steel continues to invest heavily in new technology and expansion. For example, last year the company spent more than a half million dollars to add close to 20,000 square feet to its plant in Saskatoon, Saskatchewan, including equipment purchases and investment in a new computerized drafting and scheduling software program to enhance productivity.

For such an ambitious company, Supreme Steel had humble beginnings. In the early 1970s, company founder John Leder was an employee of another fabrication company, working on cleanups at job sites, when his bosses suggested he buy a welding truck at his own expense. He did, and then decided he might as well go into business for himself; he subsequently set up a small shop in Edmonton.

Today, that business set up by Leder, who still is an owner of the company and remains involved in its day-to-day operations, has operations across a wide swatch of Canada, extending as far east as Ontario. Some of the key moments in the long-term growth of Supreme Steel came through well-timed acquisitions, as the firm bought out rivals
looking to leave the fabrication business.

Seizing opportunities
“The acquisitions have been presented to John [Leder] as opportunities that he has taken advantage of,” Guile explained. It began when the owner of Lindvale Steel, now the company’s plant in Saskatoon, said he was looking to sell the company and approached Supreme Steel. That scenario happened again in 1995 when Supreme Steel acquired Edmonton-based Central Fabrication, which is now known as Supreme Steel’s bridge division, and in 2000 when the owner of Quality Fabrication and Supply, also in Edmonton, was looking to retire.

“That added a different target market our capabilities,” Guile said. Quality has been a leader in making drilling rigs as well as log-handling cranes for the timber industry, so the deal gave Supreme Steel one more key market to go after in western Canada. In 2003, it picked up the western assets of Canron Western Constructors, which meant new facilities in Delta, British Columbia, as well as Portland, Ore., in the United States.

Guile pointed out that, despite the acquisitions, much of the firm’s growth has been organic because Supreme Steel has consistently pushed into new markets as they opened up. In the early years, the company did considerable work in the area of oil and gas exploration, and when those markets declined in the 1980s it moved more heavily into projects such as schools and hospitals. Today, the company is excited about the push to extract energy from the tar sands of western Canada, and according to Guile, is involved in building several large plants.

“Some of the work that we’re seeing here in Alberta and in Saskatchewan is for the pot ash market,” Guile said. “Recently, there have been three new plants, and so we’ve been supplying the structural steel for some of the facilities out there.” On the Pacific Coast, he said, a lot of the recent work has been more commercial in nature, including a number of high-rise residential projects as well as new stadiums from Portland to Vancouver.

One reason that Supreme Steel has been able to succeed with so many different customer groups is the firm’s broader approach to the business. Guile said the company’s policy is to get very involved in a project in the earliest possible stages of planning and design, which in turn helps clients reduce their costs and to build within a tight schedule.

Helping to design
“That means choosing an economical number of sizes and connections, designs and standards,” Guile explained. “That’s a philosophy that I would say permeates every aspect of the company.” He cited design work Supreme Steel is heavily involved in for a diamond mine in northern Ontario that is currently in the engineering stages. “We can offer what we feel is the best value because it’s design-build,” he explained.

Currently, the rising prices for oil and gas means that the economy is booming in Alberta and in other parts of western Canada. One irony is that the growth has meant a tight labor market for companies such as Supreme Steel. That’s particularly true in areas such as Saskatoon, where many potential workers have migrated toward the opportunities in the Alberta oil patch. Availability of raw material is also something of a challenge these days, Guile said.

Still, too much work and too little labor or material is a challenge that many companies would like to face these days. Guile said much of the work is repeat customers who worked with Supreme Steel in the past and know what it can do.

“Our philosophy is to develop a long-term relationship with the customer,” he said. That explains why in such a large stretch from the central plains of Canada all the way to the western shore, Supreme Steel does indeed reign supreme in its market.