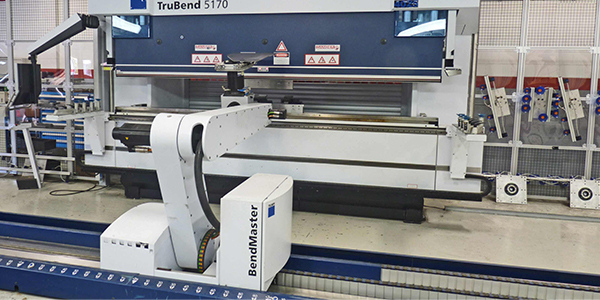 For the first 50 years of its existence, Defiance Metal Products (DMP) was a relatively small business that thrived on producing high-quality parts for automobile and truck makers. Now, Defiance is a multi-location contract manufacturer that produces metal parts for the automotive, truck, agricultural, construction and electrical distribution industries.

Operations at Defiance are divided into two areas: standard fabrication and stamping. Standard fabrication includes CNC punching, laser cutting and break forming; stamping work includes production that sometimes uses customer-owned dies. Says John Bridenbaugh, vice president of manufacturing engineering, “For many of the products we manufacture, including brackets and chassis parts, the company offers customers a choice between the two manufacturing processes – standard fabrication or hard tooling. If the customer expects to be producing a part for the next 10 years, tooling is the way to go. If the product is going to be produced in low numbers, standard fabrication would probably be the best solution. Defiance has also developed quantitative methods and formulas that make it easier for customers to make the decision.”

Bridenbaugh explains that approximately 37 percent of DMP production involves standard fabrication, 42 percent involves stamping and the remainder is work that requires both processes. He says that average DMP production runs range between 3,000 to 20,000 parts and that about half of those parts are brackets, such as those for cab mountings, alternators and seatbelts.

Describing the industry mix for DMP products, the executive estimates that about 57 percent of production is for Class 8 trucks for customers such as International Truck and Engine Corporation (ITE), Mack, Volvo and Freightliner trucks. He also points out that DMP makes 80 percent of the body for the military-model Hummer and all the roofs for the commercial Hummer.

Accommodating Growth
After 50 years of steady growth, the big change in Defiance’s business came in 1989 when Navistar named the manufacturer “supplier of choice.” Navistar, which is now ITE, cited DMP’s capabilities in quality, delivery and pricing as important factors in their choice. The relationship endured as both companies grew through the 1990s. DMP currently makes about 3,000 ITE parts.

As Defiance’s business and customer base grew, so did operations. The company now has five facilities in four states – Ohio, Pennsylvania, South Carolina and Arkansas. Employees number 814, with about 400 involved directly in manufacturing; 200 in manufacturing support services, and 200 in management, engineering and administration.

Home base in Defiance, Ohio, hosts two company facilities with a total of 407,000 square feet, having grown from 180,000 square feet starting in the late 1990s, when increased standard-fabrication business required more capacity. “Standard fabrication always has grown faster than hard tools because of the computer and the increased productivity that computers bring to our processes.”

The Defiance plant in Greenwood, S. C., was built in 1987 to provide local manufacturing services when major client Mack Trucks moved to that state. The facility, patterned after the Ohio operation, still counts Mack as one of its biggest customers. In response to new opportunities with ITE, Defiance built a plant in Heber Springs, Ark., in 1997. This facility started out producing parts for ITE school buses and now makes parts for other industries, including turf-care products and store fixtures.

The Bedford, Pa., plant was opened in 1999 to accommodate increased work for JLG Industries, Inc., a leading manufacturer of aerial work platforms. DMP Bedford provides JLG with production and assembly that require high-quality certified manual welding and robotic welding. The plant is exclusively a standard-fabrication facility and is dedicated mainly to JLG projects.

Shaping Relationships
As a contract manufacturer, Defiance seeks out opportunities to partner with customers in long-term relationships. Such is the case with Square D, a leading manufacturer of electrical distribution equipment such as transformers and switches. DMP Ohio currently makes more than 1,000 different types of parts for Square D, including brackets, chassis and panel faces and fronts that are used in the electrical distributor’s assemblies.

Bridenbaugh points out that the quality of DMP parts is vital to another of its customers, AM General, manufacturer of the rugged Humvee and Hummer vehicles. “The military specifications on the Humvee require that the parts be strong and durable, and we manufacture to those standards,” he says. DMP’s emphasis on the value of building relationships extends to its suppliers. Referring to the high-tech machinery used in Defiance’s facilities, Bridenbaugh names Trumpf, Inc. as key to operations. “We rely on Trumpf to put the latest technology into our processes,” he explains. “We have to stay abreast of all the latest technologies in order to remain competitive. Trumpf is very well respected in the industry. In fact, they are the largest manufacturers of industrial laser equipment. Very importantly, they spend 6 percent of their revenue on research and development – twice the industry average.”

The executive names Steel Warehouse, a no-frills purchaser/reseller of quality steel, as Defiance’s No. 1 supplier. However, whether Steel Warehouse purchases imported steel, which will be subject to new tariffs, or domestic steel, which may have a renewed high demand, there will be an impact on the entire industry. “Since a tariff will be slapped on the steel, domestic steel producers will also raise their prices,” he predicts.

Bridenbaugh, who has been with DMP for 25 years, believes the company’s efficient manufacturing processes and engineering-based pricing will now become even more important to its customers. “A lot of our new business comes from existing customers and a lot through our engineering department, which has three parts – new business development, project engineering and tooling,” Bridenbaugh says. “The important fact is that all quotes come from engineers who have run the piece through our shop and looked for cost-reducing opportunities. When we give a price, it’s firm.”

Turning to the prospects for continued growth, Bridenbaugh focuses on the strengths of Defiance’s quality processes. He notes that DMP was the second stamping company to receive QS 9000 certification from the Underwriter’s Labs in 1995. He also discloses that Defiance expects to be certified to the new standard, TS16949, in August 2002 – an achievement that will again make the company an early qualifier.

Bridenbaugh comments on the immediate affect the upcoming certification will have on business. “We will be doing some work for Bosch, and we’ve been told by the company that we will need this new certification by October 2002 in order to proceed. As you can see, we are ahead of the curve,” he says. Considering Defiance’s record, he could have added “again” to that statement.