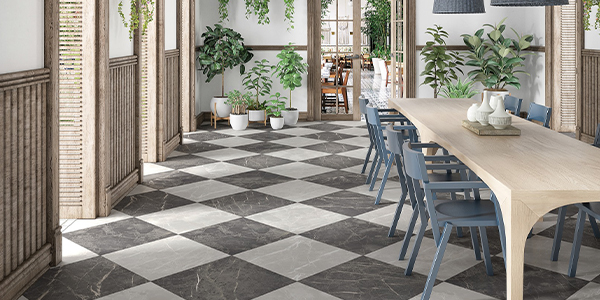 In the wake of the North American Free Trade Agreement (NAFTA), there has been a lot of fretting about the United States losing jobs to other countries, particularly Mexico. But little has been said to calm such concerns by pointing out when the opposite happens, meaning Mexican companies creating jobs in America. Such is the rare case of Interceramic, Inc.

This $300 million company launched in 1979 continues to grow through a unique blend of manufacturing excellence and marketing strategy, taking advantage of, and in some instances driving, the evolution of ceramic tile on this continent. Part of Interceramic’s growth plan included opening a U.S. facility in Garland, Texas in 1988 long before NAFTA took effect.

“This year marks our 25th anniversary and we always looked at our market as a NAFTA market,” said Victor Almeida, CEO, Interceramic, Inc. “We started selling in the United States right from day one because we viewed our market to be the U.S. and Mexico together.”

Almeida admits that manufacturing is more cost effective in Mexico, but in the case of ceramic tile there are certain products that are better made in America, such as wall tiles with traditional edges and trim that are not popular in Mexico. He estimates that 15 percent of Interceramic products are produced in the Garland facility. Total U.S. employees are about 650, with more than half in sales and distribution. Of the company’s sales ($340 million projected this year) approximately 45 percent comes from America, the rest Mexico.

Brick beginnings
Almeida is the third generation in his family to lead Interceramic. His grandfather and father together founded the company after recognizing an opportunity when he started making bricks for ranches and houses in Chihuahua, Mexico. Almeida’s grandfather had previously been involved in lumber and cattle but shifted focus to manufacturing ceramic tile. His son, Oscar, entered the business and made a key discovery: Monocotture, an Italian technology that could frost-proof ceramic tile. Before the standardization of that process, tile tended to be fragile, cracking in cold weather. By leveraging the technique in its manufacturing, Interceramic became the first North American company to use Monocotture, gaining a significant advantage over competitors and advancing the industry in the process.

“We have always tried to be very innovative, whether it be technology, design, or distribution,” said Almeida, who followed his father and grandfather into the business after graduating from the University of Texas, Austin with a degree in accounting. But he soon learned that the ceramic tile business was much more than numbers. “What I love best about this business is that it requires a lot of flexibility and innovation. It’s not just one product or one process. It demands tremendous involvement and many challenges, which keeps you motivated.”

The life span of Interceramic covers the acceptance and growth of ceramic tiles into homes in America. Once thought to be a wall and flooring option for the well to do, ceramic tile has become incredibly cost competitive. For example, 25 years ago an 8 by 8 floor tile cost $1 per square foot to produce, but now costs only 25 cents per square foot, not counting inflation, said Almeida.

“A lot of it has to do with technology over the last 25 years, which has evolved so you can make tile for less cost using better raw materials,” said Almeida. “Those savings and efficiencies have been transferred to the consumer. Additionally, demand for ceramic tile has increased because the design element of production has evolved. Tile is no longer something used for industrial purposes. Floor and wall tile come in an infinite variety of colors, shapes, and textures. It’s really an elegant art form that greatly enhances the look and feel of a home.”

To accommodate the rising demand for such a product, Interceramic has invested heavily in its plants and equipment. The Garland plant (200,000 square feet) is devoted to wall tiles. The other three Mexico-based plants in Chihuahua range in size from 750,000 to 200,000 square feet, and a fourth plant under construction will add 200,000 more square feet. Installed capacity will be 360 million square feet of ceramic tile products annually.

“Obviously keeping up with the cost is a major challenge and to stay competitive you need to be very efficient,” said Almeida. “You need to invest money in new equipment and new technology. Over the years we have remodeled 100 percent of our plants and some are already on the third generation. The new plant in Chihuahua will increase productivity by 25 percent or more.”

What’s in store
Although Almeida and company see the United States and Mexico as one market, Interceramic’s marketing approach to each is vastly different. In Mexico, the company targets end users through its 200 exclusive retail franchises throughout the country, with key locations in major cities like Chihuahua, Guadalajara, and Monterey and Mexico City. Interceramic aims for the medium to high-end family via 4,000-square foot showrooms with full kitchen and bath vignettes.

“We position our products as unique in the world, like Mercedes Benz,” said Almeida. “We go from manufacturing right to the customer. Our displays present a complete package so people make the best selection. They can walk in and buy everything they need for the bath, kitchen or home.”

This method is right for Mexico because its culture and tradition is that of a people who prefer buying tile themselves, rather than working through an intermediary, Almeida explained. Interceramic prefers it that way, too. Mainly because it allows that company more flexibility with working with consumers, which could mean showing more design variety and more innovative solutions rather than be limited by the inventory purchased by a wholesaler, which is typically the case in the United States.

US push and pull
In the United States, Interceramic markets in two ways: wholesale and direct to contractors. For example, in Chicago, the company sells to a major wholesaler who in turn sells to local dealers and contractors. Meanwhile in the ‘Sun Belt’ states, Interceramic cultivates business relationships with contractors throughout Texas, Oklahoma, Arizona, Nevada, and Southern California, said Almeida.

In addition to that “push” strategy, Interceramic seeks to influence architects, builders, and designers so that they might specify its tile in their projects. So the company participates in several large trade shows for this demographic in an effort to “pull” Interceramic through the channel.

“You not only have to push your product through the channel, you need to pull it through by getting to architects, designers, and builders at trade shows and with some advertising,” said Almeida, who explained what looms as the most impressive marketing strategy of all: its business partnership in Mexico with fixture giant Kohler.

Fixtures in the future
“When you look at the world picture trying to be the premier supplier of ceramic tile to the North American market means following a strategy that includes complementary products,” said Almeida. “So by bringing fixtures to the consumers in Mexico it really completes the whole package.”

This brilliant business model, which involves Kohler as a partner in Interceramic’s Mexican business, puts the company in a very strategic position to expand its market share, which Almeida estimates to be about 20 percent (10 percent in the U.S. in the glazed market). “We are very happy with Kohler,” said Almeida. “The combination of our complementary product lines makes us hard to beat in Mexico.”

In what Almeida suggested to be a $3 billion market, the growing ceramic tile industry has endless possibilities. As long as homeowners keep building and re-decorating, ceramic tile (not to mention kitchen and bath fixtures from Kohler) will increase in demand. As Interceramic continues to improve its technology and create a buying experience that’s unequaled in Mexico, the company’s future south, not to mention north, of the border looks stunning and solid, much like the ceramic tile made by Interceramic.