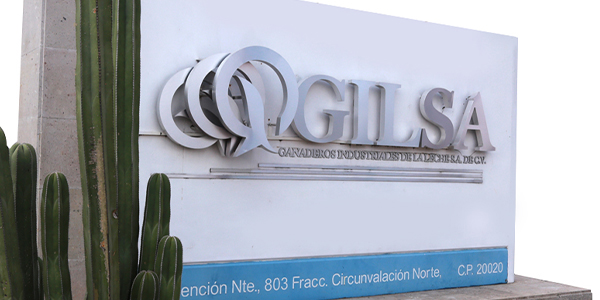 In 1964, a group of productive farmers from the smallest state of Mexico, Aguascalientes, had the idea of joining efforts and interests to build up a 100 percent Mexican company that offers the best quality in dairy products.

Making true this business idea, those farmers began industrializing and commercializing the milk that was being produced in their own farms under the most advanced programs of quality control. The newly formed Grupo Industrial de la Leche S.A. de C.V. put San Marcos pasteurized and ultrapasteurized milk on the map.

Since 1964, millions of liters of milk have been produced and serious plans of expansion have been put into place. San Marcos has grown up to cover 29 states in México, and also sells internationally. The original group of farmers includes more than 100 partners.

Nowadays, the best results in terms of product quality and levels of productivity are derived from the idea that was central in the founding of GILSA: team work and organizational culture based on quality of the whole process.

GILSA is an important part of the economic chain of Aguascalientes and of course in the Mexican dairy industry. It is easy to see the impact, considering that GILSA produces one of the most famous milk brand names in Mexico, “San Marcos.”

GILSA has become a complex entity that requires a number of functions to be performed in different areas, including those at the factory as well as in the agricultural division of the group.

Unión de Crédito Agropecuaria Industrial de Aguascalientes S.A. de C.V. (UCAIASA), created in 1976, is a credit organization that contributes to the group by offering support to its members. UCAIASA deals not only with financial services, but also with administrative issues.

Forrajera de Ganaderos de Aguascalientes S.A. de C.V provides all the supplies for the ranches of GILSA’s members. The idea is to control the whole process since the nutrition and environmental variables involved in breeding the animals is important in producing the best-quality milk. Also, Forrajera de Ganaderos de Aguascalientes makes a significant contribution to the group by providing updated information on nutrition, milk quality, soil testing, reproduction, and quality control.

and agricultural livestock farming products to the members of the group as well as to the general public.

An important part of GILSA, Pasteurizadora Aguascalientes S.A de C.V., was created on June 2, 1964. The first objective of Pasteurizadora Aguascalientes was to process and commercialize the milk directly, avoiding interference from third parties. After its creation, milk producers would achieve a very significant result: to organize the stables and at the same time avoid intermediaries.

In its beginnings, Pasteurizadora Aguascalientes was exclusively concerned with the process of pasteurizing milk for bottling in crystal containers for commercialization in the state.

Soon after, because of the high quality of its products in combination with the capacity to increase production levels, Pasteurizadora Aguascalientes began shipping its milk bottles to the neighboring states of Guanajuato, Jalisco, San Luis Potosí, Michoacán and Zacatecas.

Later on, Pasteurizadora Aguascalientes, took another step forward: On the basis of the success of the commercialization of its milk, it started to offer an array of new pasteurized products, such as juice, cream, and cheese.

At the end of the 1980s, the pasteurized products market hit a peak in Mexico and Pasteurizadora Aguascalientes was in a position to acquire new top machinery and more personnel. With a window of opportunity, novel infrastructure, know-how, and a strong focus, Pasteurizadora Aguascalientes began to offer more specialized products. At this point, “San Marcos” already had a strong presence in the market with a variety of products, and began offering, alongside its already popular brand of whole milk, flavored milk, juices, light milk. With this innovation, the company started covering the entire market of pasteurized products and making its presence impossible to miss in Mexico.

One of the most striking factors of this achievement was the fact that all the raw materials for San Marcos products were provided by GILSA partners. In other words, raw materials were always readily available, thus making it always feasible to increase production. The second advantage of this partnership is that it makes it possible to establish strict quality controls.

After accomplishing the distribution of products throughout all of Mexico, Pasteurizadora Aguascalientes developed more sophisticated dairy processes; these included milking machines, thermal tanks, coolers, and bacteriological and physiochemical analyses.

Nowadays, Pasteurizadora Aguascalientes collects approximately 75,000 liters of milk daily and it has the capacity of producing pasteurized and ultra-pasteurized products, which allows it to deliver them all around the Country.

At a time when technology is a necessity in any field, Pasteurizadora Aguascalientes relies on very impressive infrastructure. For the purposes of milk transportation and distribution, the company has top-of-the-line trucks and refrigerated containers that make the delivery of the products efficient, safe, and quick.

All of this has made GILSA a leader in its market in Mexico. Pasteurizadora Aguascalientes reaches almost all of the Mexican territory with distribution centers around the country. Among its products, consumers can choose from more than 100 products.

AUTHENTIC MILK AND SO MUCH MORE

In the last few years, GILSA increased its production capacity, evolved in its market, and accomplished fulfilling the needs of its consumers.

Along with steady progress, GILSA has always offered top quality products. The San Marcos brand name is not only a symbol of the success of the GILSA Group, but also a guarantee that these products come from a source of excellence. In addition, the open collaboration among its members has enabled GILSA to satisfy the demands of the Mexican market.

GILSA’s obsession with the development and the quality of all products that are brought to the consumers reflects the group’s conviction that the consumer deserves the best possible product. This conviction has driven all partners of the group to steadily improve and grow together. For more than 40 years, GILSA has taken the collaborative goal to another level, while bringing the best milk to the Mexican market.