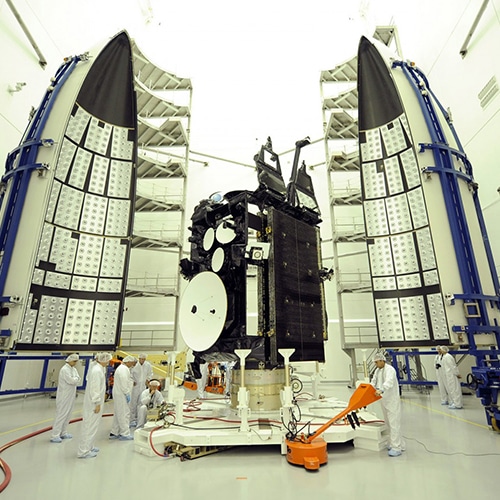 There are no final frontiers, not when it comes to Florida’s famed Space Coast, and the endless possibilities for the latest in space technology to go beyond what has already been achieved.

The region is soon to get a boost with the announcement that Lockheed Martin selected its Astrotech Space Operations site in Titusville, Brevard County, as a hub to create new capabilities and advance its role in spacecraft manufacturing, at the same time adding up to 300 jobs.

The Space Coast comprises the Kennedy Space Center (KSC) and Cape Canaveral Air Force Station. All of NASA-launched manned spaceflights, from Project Mercury in 1961 to the end of the Space Shuttle program in 2011, have departed either KSC or Cape Canaveral. Astrotech’s presence there since 1981 has furthered space missions for the United States, and since 2014, when it came under the Lockheed Martin umbrella of companies, has been a major player in the continuing effort to prepare and execute the next generation of space missions.

“Florida is home to one of the largest aerospace and aviation industries in the nation and we continue to grow,” Gov. Rick Scott said at the time of the Titusville announcement. “It’s exciting that Lockheed Martin continues to expand in Florida, adding hundreds of jobs for our families. We will do all we can to make it easier for businesses like Lockheed Martin to succeed in Florida.”

Tom Malko, vice president of Assembly, Test and Launch Operations at Lockheed Martin Space Systems, also commented when the announcement was made that Brevard County offered “a unique blend of skilled people and a growth-friendly business environment that make it a great fit for this project. Partnering with the community creates a win-win for Florida, for Lockheed Martin and for our customers.”

Astrotech Space Operations Media Director Mark Lewis, in a recent interview, said the initiative will create new capabilities and help Astrotech to advance its role in the space program. The company, which offers myriad service for customers such as NASA and the U.S. Air Force, is in the process of “evaluating the additional services we can offer in Titusville,” which could include more advanced assembly and testing. The level of expansion, as well as the cost, has yet to be determined, he said.

One thing is fixed, however: Astrotech has prepared more 300 payloads for launch, and its intent for the future, Lewis said, is to “expand how we serve the Space Coast.”

Foundations for the Future

The position of Astrotech Space Operations’ (ASO) as a leader in the space industry stems from significant investment in specialized, ideally located facilities, such as the facility in Titusville, and another at Vandenberg Air Force Base in California. Offering customers a viable alternative to government-owned processing locations, the company offers technology and capabilities that serve a variety of payloads and launch-vehicle subassemblies. Clean-room capabilities, hazardous and non-hazardous material processing, flight-hardware and ground support equipment storage, as well as office accommodations for customers, all provide “a seamless extension of the spacecraft manufacturer’s operations near the launch pad.”

With the majority of satellites launched based on Lockheed Martin’s A2100 platform, Astrotech additionally finds itself in the position to supply the services and capabilities that meet the specifications of a wide range of customers and payloads.

The A2100 is considered to be one of the most powerful flight-proven commercial spacecraft currently available. With a design life of 15 years and a flexible payload capacity suited to meet the demand for commercial space systems well into the 21st century, this modular geosynchronous satellite satisfies a demand driven by growth in mobile telephony, business services, direct broadcast, internet, multimedia and broadband services.

As far as its manufacturing facility in Titusville, Lewis emphasizes that Astrotech maintains “one of the largest clean rooms in the country” to accommodate work for its customers. “From the time satellites and spacecraft are built, transported and then encapsulated, they are kept in a continuous clean room environment, to make sure there is no contamination,” Lewis said. The craft are also transported in an environmentally controlled container. “It never sees air as we experience on earth,” he pointed out.

Satellites, spacecraft, and their function can be negatively affected by dust or microbes. “We have to ensure that no microbes are transferred from earth to another planet,” Lewis said.

To keep the “clean” in the clean room, the Titusville plant’s Modular Filtration Systems (MFS) consist of portable high efficiency particulate air (HEPA) filtration units designed to filter clean room air to eliminate working level contamination. The design is generic to allow use of single or multiple units. As the unit is filtering clean air within a clean room, a standard ISO 8 (Class 100,000) area is maintained under ISO 7 (Class 10,000). The primary objective is to achieve a continuous laminar flow velocity of 90 +/- 30 feet per minute throughout the entire space to keep particles in motion across the zone and the number of particles below ISO 7 (Class 10,000) for activity. Astrotech achieves this objective with full open ceiling access and allows for a modular design to adapt to changing requirements and equipment placement. Side wall design is dependent on specific customer requirements or personnel entry points.

In addition to the construction of payloads and transportation to launch pad, Astrotech also maintains a team of veteran propellant engineers and handlers that share more than 120 years of government and commercial operations experience in the United States and abroad. In addition, Astrotech has participated in nearly 500 propellant-related operations including propellant loading, logistics, transportation, water loading, sampling, safety oversight, and decontamination.

Along with direct propellant loading participation, the experience base includes procedure development, safety coordination and input for toxic vapor detection suppliers, high pressure testing of spacecraft propulsion systems, and the design, build, and test of propellant loading and checkout equipment.

With all of this technology, expertise and capabilities under its wings, it’s no wonder that Astrotech has received some of the biggest space flight contracts that have ever navigated through Earth’s atmosphere, including preparation of the payload for the Juno spacecraft, which arrived to study Jupiter on July 4.

“Lockheed Martin’s involvement speaks to spacecraft design, manufacturing and testing – when it’s ready for launch, it has to be a fluid motion into Astrotech for launch preparations,” Lewis said. Lockheed Martin, he added, “has a huge sweep of skills for the entire lifecycle of a particular space program. The key part is the link from manufacturing completion to launch.”

Payload preparation “is a point of pride and responsibility” for the entire team at Astrotech, he said. “Not a lot of companies do what we do.”

And after preparing more than 300 payloads for launch, does it ever get boring? The answer: It must not. As Lewis said, “A launch is never considered routine.”