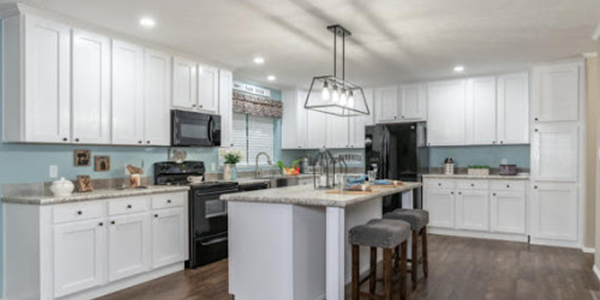 As the driving public took to the open highway in the 1950s, they soon saw the advantage of traveling in a popular vehicle known as the mobile home. The manufactured-housing industry evolved from the mobile home, and leading the way in this field is Manufactured Housing Enterprises, Inc. — located in Bryan, Ohio, and now the 14th largest producer of manufactured housing in the United States.

Manufactured Housing was founded by James L. Newman, a visionary who saw potential in the manufactured-housing market. The industry came of age long before the U.S. Department of Housing and Urban Development (HUD) code was put in place, which effectively standardized the industry. Says John Bailey, director of engineering, “The manufactured-housing industry evolved from the travel-trailer industry.” The latter is now romanticized in the form of the popular Airstream mobile home — which, for some nostalgia worshippers, epitomizes the era that saw families traveling on the country’s new freeways in a vehicle that could double as a portable house (See the Airstream profile on page 46).

According to HUD, manufactured housing is defined as a home built on an assembly line in a factory in line with the HUD housing code, which pre-empts all state and local codes. The housing is sold through a distribution network to consumers buying a second home, an affordable home or a vacation home.

Last year, Manufactured Housing produced 160,000 homes, down from the nearly half-million produced in 1979. The market, says Bailey, has had its down points, which may have coincided with tougher financing requirements for buyers. But all in all, Manufactured Housing holds its own in this competitive market, with three plants on one 200-acre site in Bryan. One facility builds single-section housing, another produces the HUD and sectional housing, and a third builds state-code modular and commercial structures. Company officials opted to expand on its facility instead of building onto the factory, a streamlining effort that helped to double capacity by rerouting work.

Manufactured Housing works with dealers from Maine to Maryland, Virginia, Florida and Colorado, “from Tennessee and up the East Coast and west to the Mississippi River,” Bailey says. Its company sales in 2000 hit $32 million.

Built-in Quality
“We offer an unlimited assortment of floor plans, and we use materials that are environmentally friendly,” Bailey adds. Those materials include structural items produced from wood chips, sheathing and wood decking, oriented strand board made of small chips of wood vs. the structural pieces made of plywood, and beams manufactured out of laminated veneer products.

The company’s innovative rafter system carries a 50-year warranty. Its skilled craftsmen build the solid oak cabinetry. The homes’ countertops are commercially edged, and the interior doors are designed with a beautiful wood grain and brass doorknobs. Manufactured Housing uses only the finest carpet and high-density padding. The company also manufactures a one-piece heat duct to make the system quieter and more efficient. The drywall is vinyl-covered to ensure durability and ease of cleaning. The homes also feature R-19 fiberglass insulation in the side walls, and exterior vinyl Lapp siding which comes in a wide variety of colors. Only Manufactured Housing offers standard features that may be considered options by competitors. Custom options can also be integrated into any home series.

New Styles for Living
“This year, we’re offering our biggest house ever,” Bailey says. Measuring 2,300 square feet, this house is called the Rembrandt and features prismatic dormers, which open the roof area to allow windows to be put in line with the roof angle. “We’re really forced to do what the industry wants us to do, but this year, we went above and beyond that,” Bailey says.

Manufactured Housing also produces the Colonial series, which features 8-foot exterior walls and the option of either a hip roof or a four-way roof, with no peak at either end. The series full-length porch makes the home triple wide. In addition, the company began this year to build porches out of white vinyl instead of treated lumber. This makes the home look less like an assembly line-built structure. “We want to make the product look more like residential site-built home. We want it to fit into the neighborhood feel,” Bailey says. “That’s where the market is headed.”

Other homes produced by Manufactured Housing include the Pinewood, an upscale home built with the latest technology in residential construction. From the engineered I-joist floor system to the 4/12 roof truss, this home is constructed with quality and durability in mind, as indicated by the company’s 10-year structural warranty. This three-bedroom, two-bath home is designed for the ultimate in family living, offering both a living room and family room. The kitchen features custom-made oak cabinetry and commercial rolled-edge countertops. The master bedroom features a walk-in closet and a master bath with a shower, a large vanity with drawers and a corner tub with a window.

“We also see innovative financing measures coming down the road in the future,” says Bailey, “and we may even get into land development ourselves. We feel we can only get bigger and better.”