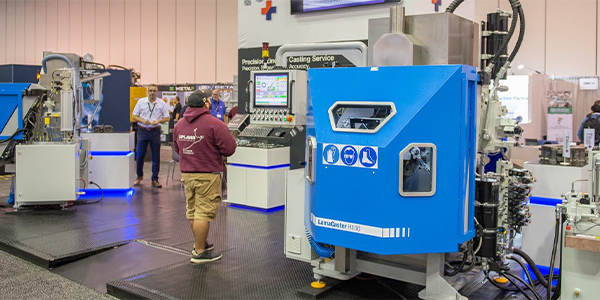 Die-casting is one segment of America’s most fundamental industry, metal casting, a production process used in parts for everything from airplanes to kitchen implements. In fact, metal castings are used in 90 percent of all finished manufactured products, with the die casting process being used for more than one-third of all castings. As part of the larger manufacturing economy, die casters face many of the same challenges as other industries: offshore competition, eroding profit margins, increasing health care costs, and rising energy prices. One of the goals of the North American Die Casting Association (NADCA) is to help its members develop innovative technologies and business strategies that can be used to remain profitable and thrive even in these conditions.

Precise Process
Die-casting is a century old process of injecting molten metal into a steel die under high pressure. The metal, either aluminum, zinc, magnesium and sometimes copper, is held under pressure until it solidifies into a net shape metal part. In modern applications, using computerized controls, die casters produce precision and high-strength products at a rapid production rate. No other metal casting processes allow for a greater variety of shapes, intricacy of design or closer dimensional tolerance. Today, over 500 die casters manufacture hundreds of thousands of non-ferrous castings ranging from automobile engine and transmission parts, to intricate components for computers and medical devices, or something as simple as a desk stapler. Die casters contribute over $7.3 billion to the nation’s economy annually and provide more than 63,000 jobs directly and indirectly. The die casting industry is a microcosm of American business. Nearly 60 percent of these companies have fewer than 100 employees, while the larger firms are world leaders.

Because die cast components are typically only part of a final product, the die casting industry’s fortunes are linked to the rise and fall of other manufacturing sectors and the overall economy. All indications are that industrial production in 2006 will grow slightly more than the rate seen in 2005 – rising about 3.4 percent – with die casting activity mirroring this trend. Overall die casting capacity will continue to decrease, but not at the rate seen earlier this decade. Some new operations have opened recently to offset the closing of others, while some automotive production is shifting to the South East and Central parts of the United States.

Industry Challenges
Two of the prime challenges for the die casting industry are the shifting of production to offshore locations and the impact of rising energy costs. While alleged cost advantages are one of the main reasons for offshore sourcing, die casters are responding by introducing new operating strategies and pointing out several factors that are often overlooked when comparing costs. Some industry analysts are now realizing that there are hidden costs of overseas sourcing, which include long lead times and intellectual property risks. Others say wage savings are overrated, and that being technologically competitive often outweighs the advantage of offshore pricing.

Along with publicizing the hidden costs of offshore production, die casters are introducing techniques that improve productivity. A 2004 NADCA benchmarking study showed an average die casting machine utilization of 70.6 percent. Although a few companies have achieved higher numbers, 85 percent is often stated as a reasonable expectation for machine utilization. This improvement in uptime is often the result of faster die changes. One company reports a 20-minute die change time, shot-to-shot, for a 1400-ton machine. The stretch goal for the industry is a die change in less than 10 minutes. NADCA is assisting die casters in reaching this goal through industry research and the publication of guides for implementing quick die changes and improving machine utilization.

On the energy front, NADCA is assisting die casters with the development of an energy and technology assessment tool. Although the metal alloys used by the die casters are produced from recycled raw materials, created with far less energy than is required for virgin alloys, rising energy costs are affecting die casters bottom lines. In late 2005, NADCA estimated that the melt energy cost alone on an 80-pound die-casting had gone from $1.69 to $3.38.

Using industry best practices, such as reducing melting temperatures, can cut energy costs to melt by at least 50 percent. In addition to this simple but effective method, the NADCA energy audit examines whether a plant can benefit from other tactics, such as reducing development time, scrap, cycle time and machine down time. Controlling all of these factors can lead to higher energy efficiency and savings.

Innovative Processes
The die casting industry is embarking on a number of other initiatives to not only improve productivity, but compete effectively in the global economy. Collaborative engineering is one of the primary ways that die casters are adding their knowledge to the more efficient development of products. Designers are finding that they can achieve further cost savings and product improvements by engineering products in conjunction with their die caster. Consulting with the die caster during the design phase helps resolve issues affecting tooling and production, while identifying the various trade-offs that could affect overall costs.

For example, the die caster can advise the engineer on decisions such as casting a cored through hole compared with showing drill spots for post-casting finishing. Even though an extra step is required, offhand drilling after casting may be simpler and less expensive than creating a complex die with numerous cores. In other cases, a more complex die with slides may reduce the amount of metal needed, provide uniform casting wall thickness or other advantages. These savings may offset the cost of more complex tooling, depending upon the production quantities.

Other innovations include:
• Design Assistance:
Expanding the die caster’s role in product design to help reduce costs and improve product quality. Die casters are working more closely than ever with customers.
• Contract Manufacturing:
Taking on added responsibilities, such as machining, plating or painting parts, or combining several parts into sub-assemblies.
• Global Sourcing of Tooling:
Improving competitive positions by finding lower-cost, offshore sources for tooling. Some die casters are forming partnerships with tooling makers in such places as China.
• Global Partnerships:
Forming wholly owned or joint venture operations in low wage nations in Asia and Eastern Europe.
• Technical Improvements:
As a result of continuing to expand technical abilities, the industry is making wider use of advanced alloys, producing larger parts, and executing more complex part designs; parts that could not be die cast only a few years ago are commonly die cast today.

Die Casting Outlook
Die casters are applying these innovations in a variety of ways to expand their markets beyond the automotive industry, which remains the highest volume user of die cast parts. A particularly strong growth area is construction products, including builders’ hardware, along with power and hand tools, plumbing, HVAC, and electrical and lighting components. These products account for 9 percent of total die casting production in North America and the segment should remain strong based on projections for new housing construction.
The marine industry is also projected for steady growth into 2008, along with lawn and garden equipment. The Outdoor Power Equipment Institute reported that lawn and garden powered equipment totaled nearly 8.6 million units during the 2004 model year, translating into a market expansion of 5 percent. The appliance industry has also reported record shipments, although imported appliances are expected to grow to eventually encompass more than 45 percent of the domestic market and reduce the demand for North American die-castings.

Of course, the automotive market continues to be the major user of die cast parts, rising to 77 percent of total shipments from 68 percent five years ago. Aluminum and magnesium die castings are at the forefront of efforts to introduce lighter weight components to help increase fuel efficiency. Today’s cars use about 300 pounds of aluminum casting per vehicle, compared with an average of 220 pounds just a few years ago.

The Future of Die Casting
Die casting is one of the great processes of the future. Few other processes add as much value to raw material in such a short time, or as cost effectively. The high technology applications of North American die castings helps to assume continued steady growth of the process in manufacturing. The automation of equipment, new processes, and the stringent requirements for casting to perform even more difficult tasks pose a great opportunity and challenge to the die casting industry for the future.