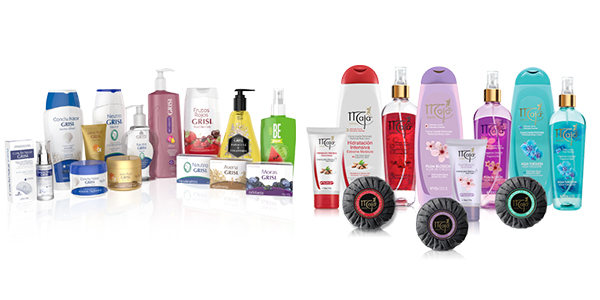 Personal care and health has been the focus of Laboratorios Grisi, a chemical-pharmaceutical company with a corporate structure encompassing four divisions that have jointly created a rock-solid reputation across the globe for more than 150 years. These divisions include Hygiene and Beauty, Pharmaceutical, Cosmetics and Specialized Personal Care Products. Laboratorios Grisi has passed the test of time as a result of the excellent understanding of the direct relationship between nature-based components, human wellness, beauty, and the ethical values on which it was founded.

Recently, the company has grown at a more rapid rate thanks to strategic alliances that have empowered it to compete with other world-class personal products companies across the globe. A good example is the signing of an agreement in 1999 with Combe de México, a company dealing with personal hygiene, beauty and hair products, cosmetics and toiletries, assuring a more effective distribution of Grisi’s Just for Men and Grecian products for gentlemen. The year 2001 saw Grisi’s joint venture with Sara Lee Corporation through one of its divisions, Digrimex, whose pool of resources resulted in a more effective distribution of an array of natural, niche personal care products in Latin America. Another one of Laboratorios Grisi’s recent milestones was the creation of Comercial Hecal, a division of Grisi Laboratories, which started operating after dealings and talks were conducted with Procter & Gamble for the development on the Mexican market of P&G’s Cover Girl and Max Factor make-up lines. The company has also partnered with Helene Curtis.

During the first five years of these collective efforts, the Cover Girl brand, specially designed for teenagers and young adults wanting to use light, natural finish make-up, increased its market presence in Mexico by 30 percent. Max Factor, a product line conceived as up-scale, professional make-up for adults who prefer a glamorous and sophisticated look with affordable price tags, also increased its penetration in the Mexican market to reach record levels in 2002.

At Laboratorios Grisi, the importance of using natural ingredients should not be overlooked, since this is a trend that is being increasingly favored both by consumers and manufacturers alike. Strategic Planning Director Alejandro Grisi says, “A critical ingredient of our success has been using only natural and herbal-based ingredients that have unquestionably revolutionized the trends in make-up preferences, not only in the domestic market, but in other countries as well.”

Formulating success
Laboratorios Grisi was founded in 1860 by José Grisi, an Italian physician who relocated to Mexico to develop formulas and pharmaceutical products that were rather avant-garde for his time. Grisi was then devoted to conducting thorough research and mixing chemical components that eventually gave birth to a medicinal compound called Emplasto Monopolis, a product that was the first brick ever laid for the construction of the world-class corporation that Laboratorios Grisi has become today.

Rather innovative at the time, the company’s products were avidly embraced by the Mexican consumer, despite the turmoil caused by the Mexican Revolution. Due to the increasing growth of its manufacturing needs, the company started creating new divisions of medicated and natural beauty products. In 1950, Laboratorios Grisi pioneered the production of the first chamomile-based shampoo, and shortly thereafter, it introduced its distinctive Organogal, a cacti and walnut-based natural formula that restores and intensifies color on dark hair. In 1984 the company launched other innovative products based on natural ingredients such as jojoba and aloe, which it successfully exported to North and Central America. Company executives decided that the market was primed in 1984 for the launching of several other products such as Ricitos de Oro, the chamomile-based shampoo for babies, which became a major fast-mover in the mass-consumption market. Additional products for baby care followed, and almost immediately thereafter, the Veterinarios line, made with natural ingredients exclusively for pets, began being manufactured and marketed with great success.

The company’s nutritional products division contributes to the consumer’s optimal health by providing a full range of nutritional supplements containing fiber, aloe vera, seven essentials, aminoacids, enzymes, vitamins A, B1, B6, C, E, and minerals like magnesium, calcium, phosphorus, iron, potassium, chromium and zinc. “Ours are products that are in compliance with the most stringent quality and sanitary controls in all of the foreign countries we serve, and are counted among the FDA-approved cosmetic and health products for distribution in the United States,” Grisi affirms.

Trend-setting operations
To date, Laboratorios Grisi continues to be a trendsetter as one of the few companies in the world that use natural-only ingredients, not only in Mexico, but also internationally. Grisi continues, “We strive constantly to reach all the goals that we set our corporate vision to, in order to be deserving of industry acclaim.” As a result of abiding by this vision, the company has been a recipient of national and international awards and acknowledgements, national certifications from academies, medical associations, advertising agencies, and it has also received continuous acknowledgements from consumers. Recent accomplishments include the 1998 European Arch Trophy for its Quality and Company Prestige. The International Selection Committee for Arco Auer in Madrid acknowledged the company in that same year for being the number one brand chosen by consumers in the field of dermatological and medicinal soaps. Also, the Instituto de Calidad y Prestigio (Quality and Prestige Institute) in Mexico, acknowledged Laboratorios Grisi in 1999 for the record sales of its Emplasto product, which has been sold in pharmacies throughout Mexico for 135 years.

This recognition is well earned. The company currently outputs an average of three million units per month, and has an overall installed capacity of producing seven million units. Manufacturing takes place at two of the company’s state-of-the-art plants located in Mexico City, and domestic distribution is coordinated through three warehousing facilities located in Guadalajara, Monterrey and Tijuana. Other foreign locations where the company maintains warehouses are Houston, Miami, Los Angeles and New York in order to expedite international distribution and to optimize delivery and turnaround for its customers.
When asked about potential expansion plans, Grisi notes, “We are planning on catering to the Asian, Korean, Chinese and Colombian markets, a feat which we feel is quite feasible
since our procedures are backed by ISO: 9000 certification. Facts and numbers demonstrate that our products have already proven successful in such demanding markets as Europe and the United States.”

Such high quality standards are the outcome of the effectiveness of the first-in-class laboratories the company possesses, processes that culminate a 150-year-old tradition of perfection and customer satisfaction.