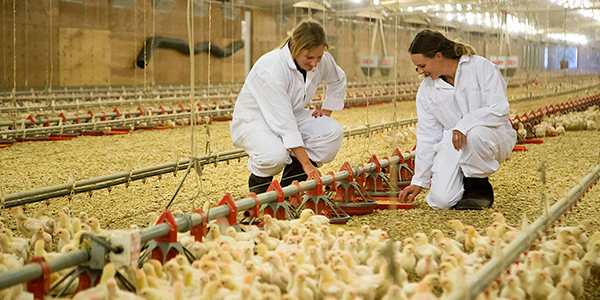 First things first. You should know right off the bat that Foster Farms has not had its chickens tainted with the bird flu or other diseases that have infected poultry, particularly in the West. Is it luck? Is it coincidence? Or, is it the meticulous care and healthful practices that the family run business has insisted upon for more than 65 years?

“We don’t always do things the most efficiently but we do them the most effectively,” says David Schanzer, group vice president. “We control everything – from the egg to delivery of the product – in an unbreakable link to the consumer. The precautions we take and biosecurity measures that are in place are driven by the quality we expect from all our products – not by the cost.” Schanzer should know about quality and the food industry having worked for companies like Kraft, ConAgra, and Fresh Express over the past 20 years.

In this day and age of farm consolidation and the use of antibiotics, hormones and injections to artificially “enhance” poultry and prepared foods, Foster Farms is a breath of fresh, country air. “We are all about locally grown, natural, fresh chicken with no preservatives, hormones or steroids,” Schanzer says. “We are in it for the long haul and willing to spend the money to make sure the environment is safe for the worker, the chickens, the consumer, and everyone involved.”

Hatching a Plan
Foster Farms was founded in 1939 by Max and Verda Foster, who purchased an 80-acre farm near Modesto, Calif. They raised turkeys, then chickens, and added a feed mill and processing plant in the 1950s. Livingston, Calif. became corporate headquarters in the 1960s. In the 1970s, the farm added a distribution center in El Monte to provide a range of poultry products to Southern California from Santa Barbara to San Diego, and as far east as Las Vegas. In 1982, Foster Farms added to the turkey processing business when it acquired the Grange Company and its subsidiary, Valchris Poultry. The acquisition enabled Foster Farms to spread its wings into packaged deli products, including poultry franks, bologna and luncheon meats. In 1990, Foster Farms expanded the chicken processing side of the business, adding a plant in Fresno that has grown significantly to more than 1,200 employees.

In the late 1980s and early 1990s, Foster Farms entered the Pacific Northwest market with acquisitions in Oregon. The company opened a new plant in Kelso, Wash. in 1998.

In 1999 Foster Farms significantly expanded its turkey operations by purchasing ConAgra’s Butterball Turkey business in Turlock, Calif. It’s made Foster Farms the West’s largest producer of turkey products for the foodservice industry with a line that includes a variety of items such as a wide selection of turkey breasts, smoked deli meats and ready-to-prepare meal kits – even corn dogs.

Poultry farming entered the 21st century when Foster Farms acquired the chicken operations of El Monte, Calif.-based Zacky Farms, then the second-largest poultry business in the West. The acquisition included a plant, hatchery, feed mill, and 35 live production ranches as well as a Los Angeles distribution center. This added 165 million pounds to Foster Farms’ annual poultry production, along with 1,500 employees to its workforce and enabled Foster Farms to broaden its customer base and expand its product line.

Rounding out the operations is Foster Farms Dairy, a state-of-the-art operation with a Fresno plant dedicated to milk and juice production; the Modesto plant is a full service location that includes the manufacturing of milk, juices, ice cream, sour cream, cottage cheese and specialty dry powders and mixes.

Super Natural Chicken
Today, with more than $1.4 billion in annual revenues, and over 10,000 employees, Foster Farms is the largest poultry producer in the Western United States. The company produces and delivers 1.3 billion pounds of fresh chicken and turkey each year to retailers, warehouse clubs and foodservice customers. Even with these numbers, Foster Farms is tiny by com-parison to the big name chicken processors. “The family is not concerned with being the biggest, only the best,” Schanzer says.

Westerners know the Foster Farms name and its famous, quirky ad campaign that features chicken puppets. These Foster Imposters® are junk food junkies who pretend to be Foster Farms birds. The paltry poultry has somewhat of a cult following in California and receive thousands of fan letters and even phone calls from viewers.

The company remains committed to delivering the highest quality products possible by owning, operating and controlling the complete processing of its birds from the time the egg is laid to the delivery of the poultry to the grocery store, and from hatcheries, grow-out ranches, feedmills, processing plants and delivery systems including its own fleet of trucks.

President of Operations Don Jackson says such control over the processing of birds is one of the unique features of Foster Farms’ operations and enhances not only the quality of the chickens but the overall value of the product.

“We own most of the farms that we produce chickens on,” he comments. “Most of our competitors’ products are raised on contract growing farms. Because of this, relative to disease control and other issues, we produce a better product.”

Foster Farms, he adds, processes five million chickens a week, raised on corn and soybean meal combined with minerals and vitamins, in facilities that have been geared toward bio-security measures to keep birds away from exposure to potential diseases and contamination. In effect, the chickens are kept isolated and secure and there are no other types of poultry or animals on site. Anyone who comes into contact with the chickens must wear protective footwear, clothing and head covering.

The procedure by which Foster Farms begins the processing is part manual labor, part automation: the chickens are both caught by hand and mechanically for transportation to the processing plant. Processing occurs under inspection guidelines set forth under the Food Safety & Inspection Service of the U.S. Department of Agriculture, a standard throughout the industry, Jackson says.

Beyond that, the procedures and methods by which the chicken is cut, deboned and otherwise further processed is based on each individual poultry producer; in the case of Foster Farms, explains Jackson, this is where the company provides an enhanced product to the consumer. In fact, Jackson stresses that Foster Farms’ products are “fresh” in the true sense of the word, which means they have not been preserved – or frozen – at temperatures below 26 degrees Fahrenheit. “The word ‘fresh’ is critical to our product,” adds Jackson, who has spent 30 years in the industry.

New Product Lines
Foster Farms continues to expand its product lines adding marinated fresh chicken and a variety of cooked chicken products and refrigerated chicken entrees, along with new ways of packaging fresh poultry. A recent example is its Fresh & Easy individually packaged, vacuum-sealed, pre-washed, boneless, skinless chicken breasts and thighs. The Fresh & Easy inner pouches are made with a material from Cryovac® comprised of a top film that incorporates an enhanced sealant. The product is placed in the formed pouch and vacuum-sealed, eliminating the need for consumers to rewrap portions for further storage. Each Fresh & Easy package contains three pouches. The popular product is available at most western retail chains.

“With Fresh & Easy, you can use the product right out of the package, because it’s pre-washed” Schanzer says. “If a consumer doesn’t use it all at once, they can place the unused pieces in the freezer, because it’s pre-packaged.”

Another benefit of the product for the good cook is that packaging allows the chicken to marinate in its own juices, naturally tenderizing and enhancing flavor.

But Foster Farms has an even bigger fish to fry. It will soon launch a new product that promises to “revolutionize the way people eat chicken,” says Schanzer. While details are under wraps, Schanzer whets our appetite by revealing that the product will be a pre-cooked, single-serve, micro-waveable meal for the convenience of families who have children eating dinner at different times. “Imagine fresh chicken microwaved in less than five minutes,” Schanzer suggests.

It makes sense that Foster Farms would package its poultry to protect freshness from the farm to the refrigerator, and from the prepared meal to the oven. It’s a natural extension of the company’s philosophy of wholesomeness.

“Nothing compares to the quality of our products,” Schanzer says.