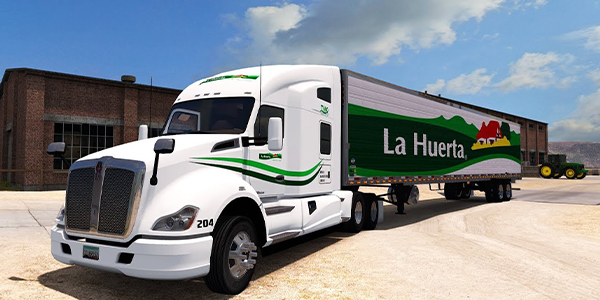 Mexico’s frozen food market is estimated at $1 billion annually, growing at a speed of 10 percent per year. However, the preference for frozen food was not always such. A practice by companies of freezing unsold fresh products left a bad taste in the mouths of consumers: Mexicans used to perceive these goods as discarded or rejected, which opposed the traditional taste of the Mexican table.

Not until the 1980s was the market ready for massive consumption of these products, and it took two decades to become a clear choice for consumers. The key contributors were increased purchasing power that allowed consumers to purchase refrigerators and microwave ovens, while the woman’s incorporation into the labor force left less time for meal preparation.

At that point, Frigorizados La Huerta S.A. de C.V. was a well-known brand name. Engineer José C. Arteaga had initiated business back in 1957. He left Mexico City to go back to his native land, Aguascalientes. The man had the vision to start an agro-industrial business that would grow and distribute produce for the region. The beginnings of Rancho Medio Kilo, the original name of the company, were hard for Arteaga. Nevertheless, he gradually established a professional team and initiated exports in 1970.

First deliveries were done in trucks with chopped ice. The first contract was obtained with United Foods, in Texas. The company would save labor costs by buying directly from La Huerta. However, due to the demand increase and potential opportunities, in 1975 Campos decided to invest in refrigeration technology. “At that time, I was a student at the university, and wrote my thesis on refrigeration systems. The idea helped my father build the technology needed,” said José Arteaga Niepmann, engineer and general director of La Huerta. By 1976, the company was exporting 8,000 tons of frozen produce a year, and had obtained its first contract with Nestlé and Gerber.

Recognizing that the U.S. was a more fertile and prepared market for its products, Arteaga and his two sons decided to start their own brand name. In 1977, they founded Jac Frozen Foods Inc. in Brownsville, Texas, launching the brand Jac Frozen Foods. In 1979, they also launched La Huerta products for the Mexican market. With these two brand names, they opened the Canadian market in 1983.

“Rancho Medio Kilo’s goal is to obtain healthier produce. We use advanced integrated plague and biological control, which avoids the use of pesticides. Together with good agricultural practices, these technologies produce less harmful, more nutritious produce to human health,” said Arteaga Niepmann.

Little Farm is the distribution company at the international level. Located in Brownsville, Texas, the company places products in stores and coordinates testing of products at different sites in the United States. It also ships to Hawaii, Canada and Japan. Arteaga Niepmann estimates La Huerta’s regional market share in 75 to 80 percent.

FRESH AND TASTY
Geographically situated in Aguascalientes, La Huerta has a superb location for growing its produce due to its altitude, climate, and soil properties. “Having built the deep-freeze plant in the center of the cropping area guarantees that the produce would be harvested and processed the same day,” added Arteaga Niepmann. La Huerta labors a 2000-hectare property, while 30 percent of its produce is acquired to regional farms under the direct supervision of La Huerta’s professional team and engineers.

La Huerta quality controls are strict and cover the entire process, from seeding and sowing to fertilization, irrigation and harvesting. Preparation of soil has a relevant role in initiating the process every season, where chemical and organic elements are integrated to assure that plants would grow free of weeds and other damaging organisms.

During the processing line, samples are taken every 15 minutes for color, taste, texture and ripeness, to ensure that quality complies with international standards. “The professional team working at quality control is highly qualified, specialized in agronomy, biology, microbiology, and are experts in the food industry,” said Arteaga Niepmann.

“We developed this technology in order to avoid the use of insecticides, while keeping plague invasion at low levels. For instance, we use biological control, an old Chinese technique that utilizes ants to eliminate certain plagues,” added Arteaga Niepmann. Biological control utilizes beneficial organisms that antagonize with harmful insects, interacting in the crops. Many plagues are controlled through the development of beneficial insects that feed on the damaging ones, creating a natural balance. “These insects are the best allies for healthy, pesticide-free produce,” added Arteaga Niepmann.

La Huerta grows and seeds three types of organisms among its crops: the predators, insects that “eat” other insects; parasitoids, which larvae feed from the “guest” insect; and the pathogens, such as fungus, bacteria and virus that cause death among damaging insects. These bio-insecticides or natural insecticides do not act upon the crops, and consequently does not harm human health or the environment.

“My father had this concern, to do the job the best it can be done, and it resulted in several awards for the quality of our products,” said Arteaga Niepmann. La Huerta obtained 22 awards for product quality in Spain, Argentina, United States, Puerto Rico, Germany and Panama, in addition to being awarded several times in Mexico.

La Huerta holds the HACCP quality certification, which is a NASA standard developed for food to be consumed by astronauts. “This certification is extremely demanding, and La Huerta has obtained it now for the last two years,” said Arteaga Niepmann.

FPA, obtained in 2004, is a certification approved by international food companies. It regulates the culture of the company, its personnel and human resources, business ethics and conduct, legal benefits and minimum wages, and minors’ work.

The company also attained the certificate for clean industry, related to safe disposal of residues and organic matter in the water. “We reutilize our used water for irrigation of sports fields used by employees and their families at the company’s facilities,” said Arteaga Niepmann.

The company supports a primary school for children and illiterate adults, and provides scholarships for employees’ children to attend college. “We developed a program in which teenagers between 14 and 18 years old can work with their parents for hours a week, learn the job, and become part of the La Huerta family,” said the businessman.

EAT BETTER, WORK BETTER
Frozen foods consumption is mainly concentrated in major cities in Mexico. The audience is composed of middle and upper social classes, families that own refrigerators, and are more aware of the benefits of a healthier lifestyle. Also, a tighter working schedule does not allow time for food preparation.

The Mexican Institute of Statistics, Geography and Informatics showed that Mexican production of frozen food increased to almost $600 million in 2002, which indicates a growing potential for this segment. Broccoli and carrots are the most consumed frozen vegetables, and the leading selling products of La Huerta.

With these statistics in mind, the company’s future expansion is based on two strategies, to increase ready-to-serve products for the local consumers, and to continue developing its own brand name products for the international markets. To achieve those goals, the company is aligning resources and training personnel. “We recognize that our main asset is the people that work with us day in and day out. Our company’s philosophy is to develop a labor force that not only can have a decent job, but can experience personal and professional growth, participates in our success, and contributes to it,” concluded Arteaga Niepmann.