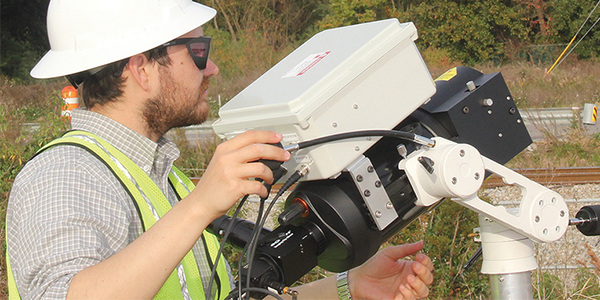 State College, Pa., can boast of a large university with a pretty good football team, great summertime corn and picturesque autumn foliage. But television reception was not its strong suit, at least not until the middle of the 1950s. That was when three Penn State physicists — George Haller, Walter Brown and John McLucas — decided to do something about the weak signals the town received from the television stations in nearby Altoona and Johnston. There were a few rather large mountains separating the viewers from the broadcasters, keeping Howdy Doody away from State College’s little kids and creating difficulties for their parents in making out Jackie Gleason and Milton Berle on their 12-inch black-and-white screens.

So the trio came up with a better way. They built a master antenna on the roof of Brown’s home in an effort to amplify the transmission signals, and ran wires to their own homes and the homes of their neighbors. Their solution gave birth to the first cable system in the United States, and to a company that is now a leader in communication technology, products and services for the broadband cable industry.

Begun as Community Engineering by Haller, Brown and McLucas, C-COR designed and manufactured cable industry equipment, and operated a multistate cable system. Between its founding in 1953 and 1970, Community Engineering changed its name to C-COR Electronics, Inc., to reflect more accurately the nature of its business. C-COR brought a number of firsts to the world of distribution electronics, including the first integrated circuits to be used in amplifiers, the first 220-megahertz amplifiers and the first heat fins for amplifiers.

Changing the Channel
By 1970, C-COR’s manufacturing success was pointing the company in a different direction. The company sold its cable operations and focused its efforts on the manufacture of cable equipment. Its production level rose meteorically over the following decade. C-COR went public on the NASDAQ exchange in 1981. In the two decades following its initial public offering, the company expanded into the global market and concentrated on meeting the product and service needs of hybrid fiber coax (HFC) cable networks. It also accumulated substantial recognition during those 20 years, most notably two Forbes magazine “best” awards. Today, C-COR provides technology and services for the full cable-network life cycle to its customers around the world. The company offers the latest in fiber-optic products, network and mobile work-force management solutions, and technical field support expertise.

C-COR’s nearly 50-year history has been characterized by its ability to sense where the industry is going and to reposition itself so that it can react quickly to a changing marketplace. Nothing bears testimony to that skill better than the past two years, when C-COR shifted its emphasis from merely high technology to mega high technology. In the short time-byte since 1999, C-COR has devoted its resources to the total support of modern HFC networks, in terms of both infrastructure and applications, and has acquired a handful of strategically positioned companies. These include Convergence.com, a leading provider of Internet enabling technical services for cable; Silicon Valley Communications, Inc., a supplier of high-performance fiber-optic equipment for broadband networks; Worldbridge Broadband Services, a nationwide provider of technical field services to the cable industry; and MobileForce Technologies, a developer of automated mobile work-force management solutions using wireless technology. The company also changed its corporate name from C-COR Electronics, Inc., to C-COR.net in 1999 to mirror the new service offerings.

C-COR.net’s geographical reach has undergone changes as well. Its corporate headquarters remain in State College. The other major facilities include a manufacturing plant in Tijuana, Mexico, and a regional office in Lakewood, Colo., which manages technical field-service projects around the country with the support of smaller satellite offices in in California, Pennsylvania and Tennessee. In addition, the company’s Santa Clara, Calif., facility is home to the fiber-optic engineering group. At Almere, The Netherlands, the company operates a self-contained facility staffed by administrative, sales and engineering personnel for the international market.

Network Stars
C-COR.net markets its network transmission products and support services primarily to cable operators. Its customer list includes clients whose names have plenty of household recognition: AT&T Broadband, AOL-TimeWarner, Adelphia Communications, Charter Communications, Cox Communications and Comcast. In addition, many smaller domestic operators and several international cable organizations depend upon C-COR.net for the quality technology and network services it provides. Marketing in the United States is the job of a direct sales force in the field and customer account teams at corporate headquarters. The company’s sales engineers and technical service personnel work closely with clients in system design and deployment, and post-installation service such as training and 24-hours-a-day, seven-days-a-week support.

David A. Woodle heads the company as chairman and chief executive officer. Reporting to him are William T. Hanelly, vice president of finance; David J. Eng, senior vice president/sales (the Americas); and Gerhard B. Nederlof, senior vice president/sales (Euro-Pacific). The chief technology officer is Kenneth A. Wright. Under their guidance, C-COR.net has made substantial capital investments which reflect the company’s strategic objectives to reduce cycle time to design, develop and deliver new products; to reduce manufacturing costs; to improve design quality; to expand the company’s service capabilities; and to maintain responsive customer service. Included in these investments are manufacturing automation, corporate information processing, customer relationship automation and research and development support, particularly in the areas of next-generation optic technology and network management systems.

Much of C-COR.net’s latest market forays have been in fiber-optic products and network management systems. It recently launched the lumaCOR™ family of optical communication products, which support voice, video and data applications over cable with advanced capabilities such as digital return and dense wave division multiplexing. C-COR.net is also working on a major pilot system with AOL-TimeWarner in Tampa, Fla. This project may revolutionize the way cable operators monitor and manage their networks by moving from reactive, after-the-fact response to proactive, real-time response in supporting their subscribers.

The company’s current and future plans are solidly based on its goal to be the premier full-network, life-cycle provider of products and services to the broadband cable industry. C-COR.net has thus moved beyond its historic role as an amplifier manufacturer to become a diversified provider of next-generation technology and services, ready to meet the challenges of a rapidly changing cable marketplace.