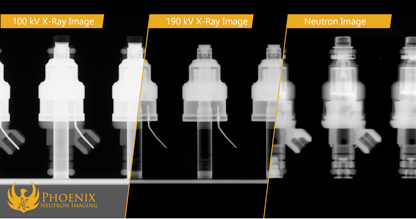 Advances in neutron imaging technology are making this NDT method more accessible and revealing more potential in the automotive industry.

As a method for industrial NDT, the potential of neutron imaging was realized soon after the discovery of the neutron in the 1930s, but it wasn’t until the 1950s that N-ray became a viable tool for nondestructive inspection of parts, when newly constructed nuclear reactors offered high enough outputs of neutron radiation to produce clear, high-resolution neutron radiographs in a timely fashion.

For decades, N-ray has been largely unused by many NDT professionals outside of these niches due to its reliance on nuclear reactors as a neutron source; however, the development of powerful accelerator based neutron generators offers more accessible alternatives to reactor facilities, which are few in number and dwindling.

Many dense materials, such as lead, are far more transparent to neutron radiation than lighter materials. In particular, energetic materials, such as the explosive charges found in ejection mechanisms, explosive signal transfer and payload fairing separation systems, munitions, and other aerospace and defense systems, are very opaque to neutron radiation due to their high hydrogen and nitrogen contents. This contrast difference allows you to accurately inspect and verify the quality of energetic materials encased in dense shells.

Airbags rely on energetic devices which act as propellant to ensure that they deploy properly in the event of a collision and keep the driver and passengers safe, and thus there is potential for neutron imaging to be used as a means of quality assurance, just as it is used in aerospace and defense for the ejection mechanisms of fighter jets or the payload deployment systems for a space shuttle.

Automotive manufacturers must be keenly aware of the chemical properties of various energetic compounds in order to know how they will perform inside an airbag deployment system. The energetic material in the inflator must impart just enough energy to the deployment system—too little, and the airbags will not fully deploy; too much, and the airbags may deploy too forcefully or the system may explode, injuring the driver and/or passengers. The latter situation occurred in the case of the widely-reported Takata airbag recall, in which the ammonium-nitrate compound used in their airbag inflator broke down and became unstable when exposed to heat and humidity over a long period of time.

Because energetic devices often consist of a dense metal shell encasing the lighter energetic material, neutron radiography is a particularly useful tool for inspecting them without dismantling or destroying them. Since energetic material shows up as opaque in neutron images, N-ray can show cracks, voids, gaps, and other physical flaws in solid energetic compounds that could indicate a potentially dangerous chemical breakdown.

Many currently existing neutron imaging vendors have limited capacities to handle energetics, especially reactor facilities, which (for good reason) typically do not allow explosives on site. Non-reactor neutron imaging facilities such as the Phoenix Neutron Imaging Center can process these materials with fewer restrictions. As more non-reactor facilities spring up, neutron imaging can become a more accessible tool for the nondestructive quality assurance, research and development, and failure analysis of energetic devices, expanding to new niches in new industries and improving modern automotive technology.

Other Applications of N-Ray in Automotive NDT

Due to the unique properties of neutron radiation, neutron imaging works well as a complementary NDT radiography method to X-ray imaging. Both radiography methods together can be incredibly useful for NDT professionals looking to gain a more complete understanding of materials, including composites and additively manufactured parts.

Neutron radiography can be applied in any industrial situation in which X-rays are utilized, not only in two-dimensional or planar radiographic imaging—for example, computed tomography, which takes radiographs of an object from multiple angles and combines them to form a three-dimensional model, can be done with both X-rays or neutron radiation.

As the technology behind neutron generators continues to advance and powerful, high-output neutron sources become more compact and easier to use, we will discover new opportunities for neutron imaging in the realm of automotive NDT.

About the Author:
Willow Ascenzo is a marketing copywriter and content creator for Phoenix, LLC., a nuclear technology company headquartered in the Madison, Wisconsin area.