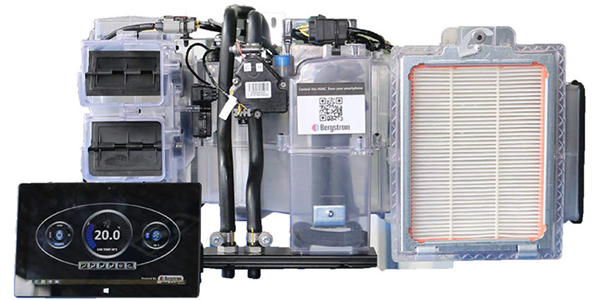 Business success can be distilled to a trio of key conditions: being in the right place at the right time with the right product.

Bergstrom Inc., a global leader for more than half a century in the design and supply of climate systems for commercial vehicles, has lined up all three conditions on the eve of new federal regulations with a new product to heat and cool cabs of heavy-duty trucks.

“Imagine driving a big rig down a road in Minnesota in January and having to pull over to get a few hours sleep,” said John Locarno, vice president of global sales and general manager of Bergstrom’s aftermarket division. “You have to keep your engine going or you’ll freeze. But very soon truckers won’t be able to do that because of new federal regulations.”

New engine and fuel laws going into effect in 2007 will change the way diesel truck drivers spend their sleep hours along the roads of North America. The long-standard practice of overnight idling – keeping the engine running (and the heater heating) while the driver sleeps – has not only fallen into disfavor because of environmental and economic reasons, but long-term idling will soon be against the law.

“We’re not the only company with these kinds of devices now,” Locarno says,” but we feel ours is the cleanest and most cost efficient.”

Bergstrom is positioning its NITE system as both original equipment in new trucks as well as an aftermarket add-on for rigs already on the road.

Midwestern roots
Bergstrom, still headquartered in Rockford, Ill., where it was born as a one-man operation almost 60 years ago, is a privately owned, international company with facilities on three continents manned by more than 1,000 employees.

After World War II, Adolph Bergstrom began designing and building heaters to keep drivers of commercial vehicles warm in cold Midwestern winters. He founded the company in 1949 and two years later was joined by partner Elvin Rydell whose son David Rydell is now the company’s CEO. In 1952 Bergstrom and Rydell began building and installing heaters for school buses. Caterpillar hired them a couple of years later to make heaters for their vehicles. Bergstrom’s first truck contract came in 1966 when Kenworth Truck hired the company to make heating & air conditioning units for Kenworth’s big rigs. Mack, Kenworth and other trucking companies are long-time customers of Bergstrom’s.

In 1971, the company moved to its present site on 32 acres in Rockford. In the late 1980s, Bergstrom began to look beyond North America, first producing heating and air conditioning systems for Volvo, then opening Bergstrom, Europe in Birmingham, U.K.

Bergstrom’s European headquarters is now in Wales. The most recent expansion was into the Asian-Pacific region with a facility in Changzhuo, Jiangsu, China.

All of Bergstrom’s five plants – three in Illinois (Rockford, Joliet and Byron), Wales and China – have capacity for engineering, research and development, manufacturing, testing and validation as well as aftermarket support. The company is certified under two quality-assurance systems: QS-9000 and ISO: 9001.

Responding to new demands
In the last decade, Bergstrom has responded to demand for climate control systems that consume lower amounts of energy and have a reduced impact on the environment. As the size and weight requirements for air conditioning systems got smaller, performance requirements for both temperature and humidity either remained the same or became more stringent. These changing requirements created a considerable challenge for Bergstrom engineers.

“The upward spike in diesel fuel prices and the growing sentiment against the practice of idling have forced fleet managers and independent operators to critically examine alternatives to overnight truck idling,” says Terry Zeigler, Bergstrom’s vice president and general manager for electrified products. “The mobile climate industry is moving away from engine-driven systems toward self-contained, electrically powered units. NITE technology provides a no-idle system that cuts down on environmental pollution and fuel usage while meeting anti-idling laws.”

Combining progressive engineering talent, lean manufacturing principals and a growing global footprint, Bergstrom has become a market leader by concentrating on its primary products, value pricing and after-sale follow through.

More growth ahead
Bergstrom started the new millennium with a couple of significant acquisitions – the Kysor-Westran corporation in 2000 and Sigma heavy-duty HVAC and electrical systems in 2003. More growth is anticipated – both organic and through acquisitions.

In addition to new federal regulations in 2007, another wave of new laws regulating diesel fuel and the trucking industry is slated to take effect in 2010. The impacts of the new laws are already reverberating throughout the heavy-duty vehicle industry. The new challenges mean new business potential in several arenas: further emission reductions, emerging global warming requirements, health effects, increases in efficiency, global agreement on regulations.

Besides new opportunities in North America because of tightening federal regulations there’s a whole world of new possibilities out there.

“The world’s becoming smaller,” Locarno says. “ We have to look outside of North America and Europe. Everyone knows what’s going on in China and India and Brazil. There are new markets opening up and expanding all over. We plan to be there when they do.”