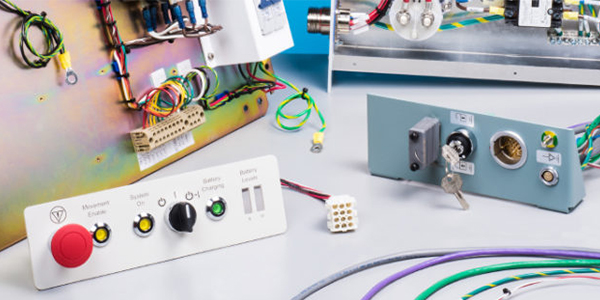 You might say this company had the rug pulled out from under it. Even while that is true, you might also say that this company has its own special guardian angel. When it lost its biggest client, it also lost about 30 percent of its business in just under one month. This could have meant the beginning of the end for most companies. “A lot of our competitors felt that we were done forever,” says Ralph L. Santosuosso, director of sales and marketing. But Aved Electronics of Lowell, Mass., proved those competitors wrong.

It was 1996 and Aved had been in business for 17 years as a successful regional components distributor. “We were running about $7 million annually then,” says Santosuosso. But then a franchised vendor the company represented, one of the world’s largest connector manufacturers, decided to distribute its connector product through national distributors and cut out most of its regional distribution.

However, just a few years prior to this devastating reality, astute Aved executives noted that contract manufacturing was growing in popularity. “We were having a hard time competing against the national distributors then and we decided to begin to focus on manufacturing,” says Santosuosso. “It was fortunate that we had already begun to get involved in this because we at least had the ball rolling when we lost that business.”

Aved employees pulled together and from 1996 to the end of fiscal 2000, they rolled up their sleeves and redefined the company. “We expect to close fiscal 2000 (ending March 2001) at $10 million, far surpassing our best year as a distributor,” says Santosuosso. How did they accomplish this feat? Good, old-fashioned American ingenuity and determination are part of the answer.

New Contract for Success
The transition from distributor to manufacturer was not without trial. “We had about a three-year period that was a real tough transition for us,” says Santosuosso. “It’s really a credit to our people here for just hanging in there and helping us turn things around.” And turn things around they did – now Aved’s business is comprised of 90 percent manufacturing and 10 percent distribution. “Throughout that rough transition period, we had to develop a different product focus and a whole new customer base. And we did it in just under three years.”

Part of Aved’s success as a manufacturer of custom cable harness assemblies is due to its local connections. “We are kind of an extension of our customers’ manufacturing floors, and they want to be able to come in to see the progress,” says Santosuosso.

Aved has a strong reputation in design services as well, helping customers re-engineer or back-engineer. Santosuosso says, “Many times, documentation is a big issue and many times, we find better ways to manufacture products for our customers.” Aved produces more than 250 different assemblies every month, certainly strong enough testimony to its design and engineering prowess. Its products are used in automation equipment, communications, medical instrumentation, computers, semiconductor equipment and contract manufacturing industries.

Three into One
Another part of that success is due to Santosuosso’s father, Ralph P., who is president of the company. “A lot of credit goes to my dad in acquiring Generation Electronics in 1988 on the battery side of our business,” says Santosuosso. Aved Electronics is the corporate umbrella under which the three divisions of the company operate. These are Aved Manufacturing (manufacturing cable harness assemblies), Generation Electronics (producing battery packs) and Aved Components (providing passive components).

As outsourcing became more prevalent in the industry and Aved’s OEM customers began to use outsource companies, things got tough for the company. “It really affected us from the components end as we designed in connectors to go onto PC boards. Because we didn’t have a relationship with the contract manufacturer, we in essence lost the business that we had worked so hard in designing,” says Santosuosso.

Add to this scenario the fact that national distributors were offering programs to store inventory in customers’ warehouses — inventory that the customers did not have to pay for until they took parts off the shelf to use. “The national distributors could afford to operate with very low margins, making it up in volume,” continues Santosuosso. “So it was very difficult for us to keep up with them.” That was when Aved got tough with itself and asked how it could compete, deciding to become a contract manufacturer by using the connectors it sold to begin manufacturing cable assemblies. “And because interconnect was our specialty, we were able to build a reputation of doing this well,” Santosuosso says.

Aved capitalized on a crucial advantage it already had. “One of the main learning curves in cable assembly houses is procurement,” explains Santosuosso. “We already had all of the good contacts and relationships with connector manufacturers, and it really helped us in procuring the products for the cable assemblies because that had been our specialty for so long.”

The company moved to bigger quarters to allow room for manufacturing. “That was a big leap of faith for us at the time because it was shortly after we lost that major account,” says Santosuosso. Aved’s new facility of 16,000 square feet helped to secure business from potential clients, especially when they toured the facility. “People feel comfortable in choosing us because we know our business so well,” he says.

Aved also succeeded by sticking to what it knew best: its core competencies of interconnect and manufacturing cable assemblies. Combining technical expertise with inventory management skills, Aved helps customers keep production costs down and profits up. Aved’s technical staff is available to assist customers in every phase of custom cable assembly, from the selection of raw material and components to the production of a finished product.

Leading the (Battery) Pack
Not only does Aved design and engineer custom cable assemblies, but it also builds customized battery packs for specific applications, offering engineered solutions to its customers. “We help our customers choose the right chemistry for the right application,” says Santosuosso, noting that Aved’s battery packs are used in products ranging from medical instrumentation to the door locks of the rooms in many national hotels. “Service is key for us whether it’s the back-engineering we offer, the cable assemblies we manufacture or the design engineering we offer in manufacturing battery packs,” says Santosuosso.

In a world of bigger conglomerates, Aved stands proud and tall. “Our customers are very comfortable doing business with us because we are a family-run business,” says Santosuosso, noting that turnover among its 70 employees continues to be very low. He adds, “The reason we are who we are today is because of our level of service. I never have to watch over my sales force because they take their jobs seriously and when they make a commitment to our customers, it’s a personal commitment and our customers recognize and appreciate that.”

As Aved looks to the future, it anticipates moving more into electromechanical assembly for contract manufacturing. For now, it is focused on maintaining its new role and new image. “We will continue to give people a resource for strong engineering services. I see our business growing substantially into new markets,” concludes Santosuosso.