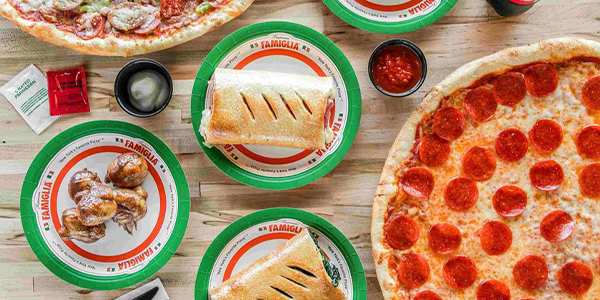 he Famous Famiglia business name has become synonymous with New York-style pizza. Its product is as indigenous to New York as Guastavino architecture in Grand Central Terminal, the Coney Island amusement structures and sideshows, the nighttime neon rainbow of Times Square, the bustle of Broadway, the squirrels of Central Park, and the Gershwin melodies that rise up from the wellsprings of memory to internally soundtrack the entire city experience.

In other words, its food is one of the defining elements of the city. In only 19 years, the company’s menu has become so entrenched in the culture of New York that its main offering is the “official pizza” of the New York Yankees and Madison Square Garden.
It achieved those designations by developing a strong identity, one that was established and then sustained by the integrity of its product. Integrity itself comes through consistency, and Famous Famiglia won’t adulterate its product to cater to trends in taste, diet, or business strategies.

For instance, in the past several years, the food industry was swept up in the low-carb diet craze. Well, that fad has come and gone, but the unaltered Famiglia product endures. “At the height of that fad, people were asking us if we were going to respond with a low-carb version of our pizza,” says Famous Famiglia Executive Vice President Giorgio Kolaj.
The answer was an emphatic “no.”

“We remained true to our original recipes, which represents our heritage, our traditions,” says Kolaj. “We stick to the business that we know and the methods that made our name. We honor the recipes we learned when we were kids.”

Unique Ingredients
The recipes are comprised of Famiglia’s unique dough, sauce, and cheeses. Don’t ask for the specific ingredients; any self-respecting food company won’t divulge such proprietary information. But understand that Famiglia’s recipes are so exacting that the company will only use New York water in preparation of its dough.

No short cuts are taken. Not only does Famous Famiglia take the trouble to include New York water for its dough, the company uses extra virgin olive oil and willingly incurs the extra costs for the sake of quality and integrity. “I don’t know of any pizzeria that uses extra virgin oil in its dough, because it costs significantly more than inferior oils,” says Kolaj. “When you are making five to 10 batches of dough a day, the cost can add up. But that’s fine with us. We’ll spend the extra dollars it takes to make real New York pizza.”
The extra effort translates into profits. “At the end of the day, the customer appreciates the difference,” comments Kolaj.

Hand-on Experience
While Famous Famiglia’s headquarters are now in White Plains, N.Y., its roots are in New York City. The genesis of the business occurred in 1970, when the The Kolaj family – the four brothers (Tony, Paul, John and Giorgio), their sister, and their widowed mother – came to in New York City from Italy. In the late 1970s and early 1980s, the brothers learned the trade by working in New York pizzerias, gaining hands-on experience in every element of the pizza-making business. They started out by washing pots and pans and then graduated to delivering pizzas, working the counters, and making the pizzas.

“I started working in pizzerias when I was six years old and I managed my first pizzeria when I was 16,” recalls Kolaj. “I learned every aspect of the business.”

That is, he learned what works and what doesn’t.

The family took the next logical step and opened its first pizzeria on Aug. 6, 1986 in the Upper Westside of Manhattan. The signature product, authentic New York-style pizza, became an immediate hit with city denizens, and the company became a leader in the local pizza market. Over the next 12 years, they opened more locations throughout the city, entrenching themselves in the New York food culture, thanks to the quality of product and service they provided.

“This is the one and only business we know,” comments Kolaj. “We’re proud of that, and we focus on offering real New York pizza made by real New Yorkers.”

Under the leadership of Paul Kolaj, who became the company president, Famous Famiglia subsequently offered a menu that included a variety of pizzas and toppings, calzones, sandwiches and specialty dishes.

Expansion
Today, the company operates a chain of 43 pizza parlors, many located in New York City, but it has made inroads into major markets across the country through expansion that includes franchising and strategic partnerships. “We will have more than 50 locations by the end of this year,” reports Kolaj.

However, as the company expands, Family Famiglia continues to maintain the integrity of its products in all of its locations. It is franchising its quality, not just its name or the “authentic New York Pizza” claim.

“We do whatever is humanly possible to maintain quality,” comments Kolaj.

To some, that effort seems to extend above and beyond what most enterprises would be obliged to do in a national business climate that fosters homogenization. New York Pizza is not just a name to put on a sign – when the brothers say New York Pizza, they mean New York Pizza. “We even bottle our own brand of New York water for the use of preparation of the dough outside of New York,” says Kolaj. “All of this ensures consistent quality.”

Essentially, they strive to make sure that when relocated Easterners buy Famous Famiglia’s New York style pizza, they know exactly what they are getting and, further, that they receive what is advertised. Moreover, the Kolaj family wants new customers to enjoy a product that lives up to the word-of-mouth reputation.

To that end, the company not only provides all locations with its exacting recipes; it provides input into the restaurant’s atmosphere, trains the staff at new locations and even oversees the initial weeks of operations. In this way, Famous Famiglia ensures the consistency of the stores across the country.

Responding to Demand
According to Kolaj, the company first had no real interest in expanding, but customer demand proved too great to ignore.

“At first, we really had no intent of branching out, so we focused the business in New York City, developing our recipes, systems and so forth. But, at the request of many customers, business partners, landlords and suppliers across the United States, and even abroad, we decided to expand,” says Kolaj.

Initial expansion began in 1999. The first franchise was established in 2001. “Currently, we are in 12 states and we’re as far west as Las Vegas,” reveals Kolaj. “By the end of this year, we’ll be expanding into other states and opening more locations in existing states. We are also getting a lot of interest from overseas.”

Expansion efforts include entering into strategic alliances with several important partners. In 2001, Famous Famiglia entered into the lucrative airport market, establishing partnerships with Continental Airlines, American Airlines, Delta Air Lines and JetBlue Airways. “That has been a very strong segment for us,” reports Kolaj.

More recently, the company announced a joint venture partnership with the DeBartolo family, which resulted in the formation of Famiglia DeBartolo, LLC, and it inked several franchise deals with the Compass Group. The world’s leading foodservice company, the Compass Group boasts annual sales of more than $18 billion.

Market Presence
Famous Famiglia has a strong presence in markets that include shopping centers, airports, hotels and casinos, universities, travel plazas and theme parks. But it just doesn’t willy-nilly establish a new site at any location. “As we gear the business for expansion in North America and abroad, we believe in the value of strong partnerships, just as we believe very strongly in the ingredients that make the product,” says Kolaj. “Therefore, we are selective about our locations and our franchise partners.”

Because of its approach, Famous Famiglia stands to flourish in the current pizza market climate. “Many of our competitors are starting to lose their traction,” explains Kolaj. “The value of their brand is really suffering. As a result we are getting a lot of calls from landlords who are looking to upgrade the experience of their establishments. More and more, they are turning to us.”