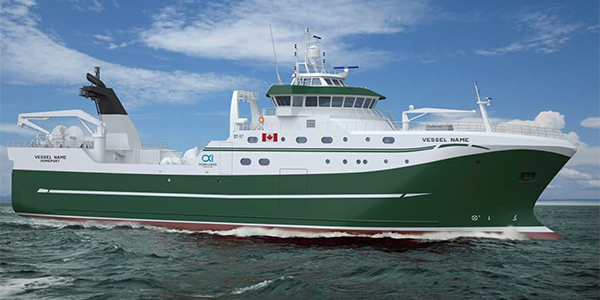 Ocean Choice International (OCI) is positioned at the top of the world, both figuratively and literally.

In the figurative sense, through numerous and significant acquisitions and partnerships, OCI has become a leading global processor and distributor of the most pleasing and popular seafood selections (such as lobsters, crabs, shrimp, mussels and a variety of fish).

In the literal sense, OCI is indeed physically located close to the top of world, in the northernmost climes still fit for human habitation. An integral part of the Newfoundland, Canada fishing industry, with headquarters in St. John’s, OCI has a widespread presence in the Atlantic Canada region.

Through its acquisitions and partnerships, the company has locations in Newfoundland (Burgeo, Hermitage, Jackson’s Arm, Lawn, St. Brides, St. John’s, St. Lawrence, and St. Lewis); Nova Scotia (Arisaig, Lismore), and Prince Edward Island (Souris, Beach Point). Its harvest areas are off the northeastern Canadian coast, as well as above the North American continent itself, in the waters off of Baffin Island and Greenland.

Reference these regions on an atlas or globe and you can almost feel the cold climate penetrate your bones or hear the chilly, churning waters of the North Atlantic. This is the land and sea of northern lights, floating ice and proximity to the Arctic Circle.

Still, as harsh as the region may seem, the waters teem with life. OCI brings this rich ocean harvest to the tables of seafood lovers around the world. One of its specialties is lobster. “We’ve become one of the world’s largest and diverse value added lobster processors,” says Blaine Sullivan, OCI co-founder and vice president. “Our major product is lobster. We’ve produced more than 200 different types of frozen lobster, from different shell types to various meat portions. Our second-major product is snow crab.”

OCI manages numerous processing plants, two factory freezer vessels and is engaged in several Canadian and international partnerships. Further, to ensure a year-round supply for its customers, OCI engages in the procurement of raw material and finished product in international markets. This underscores the company’s ongoing search for new opportunities to expand its base, through either new products or new markets.

OCI serves customers in the food service, institutional and retail markets on an international basis. “We deal with more than 20 countries in North America, Europe and Asia,” adds Sullivan. “Recently, we decided to become a sales and marketing company as well as a primary producer of products. Since then, we’ve made major inroads. Currently, we’re dealing with some of the largest retailers in Europe. We’ve also been doing business with several of the largest distributors in North America.”

OCI was formed in 2000 as the parent company for a number of operating companies already existing in the Newfoundland fishing industry. The founders of the company, Martin Sullivan, the company’s president, and brother, Blaine, along with Iris Petten and Ches Penney, brought to the organization many years of experience in seafood processing and international marketing. Their intent with OCI was to establish the company as the vehicle to integrate the various operating companies and to position the company for future growth.

“We sought to purchase companies that already have fishing assets, and we’ve brought all of these assets under one umbrella,” says Sullivan.

OCI serves as the primary sales company and group head office for that umbrella. Its numerous subsidiaries include Ocean Choice PEI Inc., which was formed in March 2004 through the purchase of several Atlantic Canadian-based lobster processing facilities.

Ocean Choice PEI processes Canadian lobster products in fresh, frozen and value-added forms. It has introduced raw, whole, shell-on, frozen lobster and lobster meat using HyperFresh hyperbaric production technology. While HyperFresh lobster tastes and acts like fresh, it costs buyers and customers less in labor, preparation time and space, according to OCI. The machine submits lobster parts to 50,000 pps pressure, separating the meat inside a claw from the membrane binding it to the shell. The meat comes out easily with a sharp whack to the shell – sweet and tasty and wholly intact. Customers, especially restaurateurs, love the product for its taste and quality, and especially the ease of handling in the kitchen.

OCI’s other locations include:

• Katsheshuk Fisheries Ltd., a company that harvests and markets northern shrimp and Greenland halibut. In this venture, OCI has partnered with two other Newfoundland seafood processors as well as the Innu of Labrador.

“Since our founding, we have done something almost every year to grow the company,” says Sullivan.

One of the most significant developments to spur company growth took place in March 2004, when OCI purchased the assets of Polar Foods International, the largest food processing company in Prince Edward Island and the province’s main lobster producer. Polar Foods’ assets included seven lobster-processing plants. This gave the company access to the prolific and valuable lobster catches in the waters of the Gulf of St. Lawrence.

At current, OCI is in the midst of their most exciting undertaking to date. The company is in the process of acquiring the Newfoundland assets of Fisheries Products International. This further highlights the progress OCI has made in the years since 2000 when the new umbrella company was formed.

As part of acquiring the FPI processing facilities, the company pledged to invest $8 million in modernization of the Newfoundland plants. In Prince Edward Island the company has spent more than $10 million in similar expenditures, including the installation of Hyperfresh hyperbaric technology.

Ocean Choice now ranks as the largest and most varied seafood processor in Atlantic Canada and a prominent global player in the seafood industry.

“We now deal with more than 20 companies in Europe, Asia and North America, “says Sullivan. “ We are a sales and marketing company, as well as a product manufacturer. Currently we are dealing with some of the largest retailers in Europe; and some of the biggest distributors in North America.

“It’s a harder sell nowadays,” comments OCI (PEI) Marketing Director Dana Drummond. “Eighty percent of our product is paid for on the American dollar. Four years ago there was a 40 percent difference in the dollar. Now it’s about four cents and buyers fight on any price increase.”

Despite this, there are two words you hear a lot around Ocean Choice plants in Newfoundland, Prince Edward Island and Nova Scotia these days – productivity and quality. “Given all the other variables, especially in the value of the U.S. dollar and the uncertainty of a good supply of workers, we know that superior technology is at least a partial answer to productivity,” says Sullivan. “The other absolute certainty is that the keys to success in a global market are consistent quality and reliability. If you can’t assure your customers that the quality will always be there – then you won’t last long in the marketplace. So that’s what we aim for, always – quality and reliability in everything we process.”

The formula seems to be working. Ocean Choice is on the move, making waves as it gets closer to its goal of establishing the company as a leader in the processing of fresh caught seafood from the cold, clear waters of the North Atlantic.

As OCI heads into the future, its largest emerging challenge is finding enough employees to work in its facilities. OCI originally recruited workers from the Atlantic provinces but, in recent years, it has been falling short of its employment targets.

“Young people aren’t attracted to the seafood industry,” observes Sullivan. “Many of them have gone to the oilfields in the Canadian west, where there’s a boom time mentality, and paychecks to match.”

This year the company brought in 14 workers from Russia; signed on nearly 50 workers from New Brunswick and ran its own daily bus service bringing workers from Charlottetown (80 kilometers away) to complement its supply of local workers and those from the Atlantic Provinces.

“If you look at eastern Canada in general, the demographics are changing, and that has made workforce a big issue for us,” explains Sullivan. “We use to have a lot of workers available, but that has been changing over the past several years, and it’s only going to get more difficult over time. As a result, we’ve had to make some changes.”

OCI is addressing the issue by looking beyond its region and recruiting employees internationally. “We’re trying to get people from other countries to move to our locations,” says Sullivan. Additionally, we are implementing technology to more efficiently produce.

In the spring of 2006, OCI successfully recruited about 40 workers from Russia to work at its Souris plant on Prince Edward Island. OCI paid for the workers’ flight from Moscow to Canada and arranged housing for them in the Souris area. The company received no government assistance in bringing the workers across the Atlantic. The workers went through an orientation session and were almost immediately ready to cover the company processing lines.

International workers underscore OCI’s global nature, and the world can be the company’s oyster, to paraphrase Shakespeare. When the Sullivan brothers established OCI, their goal was to make their company a leader in the fishing industry. They’re achieving this goal through strategic acquisitions and partnerships, which has enabled OCI to deliver the highest quality and best value to its customers.