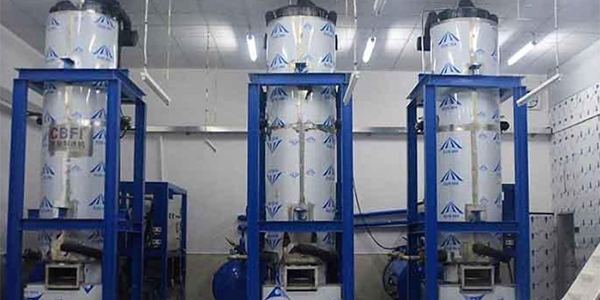 For many makers of large industrial-sized heating and cooling units, the last 15 years or so have not been the best of times. That’s because so many large North American-based manufacturing firms have either curtailed their operations or shifted large segments of their production to the Pacific Rim.

But one such company, ICE (US), Inc., has been highly successful during that time by targeting one niche in the marketplace that has been growing: warehouses and giant distribution centers. These facilities have been booming as American consumer products increasingly come from abroad.

Sean Clancy, the general manager and part owner of the company, which is headquartered in Tennessee, said that the key moves were made about a dozen years ago, when ICE Manufacturing opened a new, 40,000-square-foot factory in Bolivar, Tenn., to focus on air turnover units that rely on recirculated air for heating, cooling, ventilating and de-humidification.

“It really is the ideal way to cover large warehouses,” Clancy explained. “We’re kind of a unique force in that only a handful of players have come into it. Yet it’s an ideal way to cover big buildings like a half-million- or a million-square-foot distribution center. You might need only six units, whereas if you go with one of the mass production heating and air companies you might need 20 or more units.”

One such project is the Amerisource, Inc., distribution center in Sacramento, Calif., which is 275,000 square feet but also 30 feet high, which creates special heating and cooling issues. Because the company distributes pharmaceutical products, there is a need for very even temperatures throughout the room. ICE (US), Inc. supplied four large indoor air rotation units, built into recessed wall pockets each with a 300-ton chilled water-cooling coil capacity.

Residential roots
And that is not even the largest such project for ICE (US), Inc, which in recent years has built the heating and cooling systems for two massive, one-million-square-foot distribution centers for Home Depot, one in Sacramento and the other in Winchester, Va. The big facilities each require only seven large air turnover units, wall recessed and with central controls.

The small, family-owned company has grown in recent years as rapidly as its customer base and the size of its projects. Clancy said that ICE Manufacturing currently employs more than 200 people, with about 65 or so workers at its Tennessee plant and roughly 140 in Winnipeg, where the firm initially started.

Clancy said that the company’s focus soon shifted, however, after attending the annual ASHRAE show (American Society of Heating, Refrigerating and Air Conditioning Engineers) in the United States and discovered new technologies for direct-fired natural gas products. “They burned so cleanly that it was a new technology, although now it is widely used across North America,” Clancy explained. “So he brought that technology back to Canada and started building up the company.”

Looking to Tennessee
In its earliest incarnation, the company was called Bullocks Manufacturing and then for a time it was a unit of ICG Utilities, Inc., a large Canadian-based gas supplier. More than two decades ago, however, the firm was purchased by Clancy’s father, and the family still owns the renamed ICE Manufacturing.

Several decisions have powered the current company forward. The first, according to Clancy, was a move into larger industrial gas-powered heating and cooling units, with both direct units and highly efficient indirect models that use stainless steel heat exchangers. The move meant that ICE (US), Inc. was soon supplying large industrial customers including those in the automotive, mining and food processing sectors.

The second was the construction of the initial U.S. plant in Tennessee. Clancy noted that with the need for larger units, the company just last year moved into an all new plant in Bolivar that is 80,000 square feet, or double the size of its original facility there. “We put in a six-ton overhead crane system, and a new paint line with not only a priming booth but also a curing and finishing booth,” he said. He said the new Tennessee plant also allows for a new production line that operates much more efficiently than the one at the old plant.

The new facility in Bolivar also allows ICE (US), Inc. to build massive units that are as tall as 40 feet and containing 350 tons of coils that can supply up to 200,000 cubic feet per minute of air. ICE (US), Inc. has built these types of large-scale units for customers like Home Depot and Circuit City.

The company also operates two manufacturing facilities in Winnipeg. The largest, which is 65,000 square feet, continues to build ICE Manufacturing’s main lines of direct and indirect fired gas products, while a 40,000-square-foot factory makes product for the company’s Frost Fighter division, a 40-year-old line of oil-fired temporary heating equipment.
Clancy said that an increasing amount of the work that ICE (US), Inc. does involves custom-built projects for its clients. High performance and specialized units often utilized include high turndown indirect fired furnaces. He said about 40 percent of the company’s products are currently customized, although he added that all of its industrial units are built to order.

Using The Configurator
“We don’t mass produce anything,” Clancy said. The firm employs a fairly large staff, including over 25 employees in the engineering department who work primarily on design. He said the specialized approach should help ICE (US), Inc. survive challenges here in North America from plants in Mexico with lower labor costs or from U.S. plants that are geared more heavily toward mass production.

To that end, ICE Manufacturing recently started using a new, customized-HVAC computer software program that it calls The Configurator. Clancy explained how it works: The customer is given a series of input boxes to check off and the program helps to develop an individualized solution. “It sounds pretty hard to believe, but these days the technology is incredible,” he said. “It is married to SolidWorks, which is a 3-D CAD program. If you make a change to a blower in SolidWorks, it automatically reconfigures the other pieces to match up with that.”

It all adds up to a company that has come a long way in less than a half century. Its name may be ICE (US), Inc, but this firm is hot.