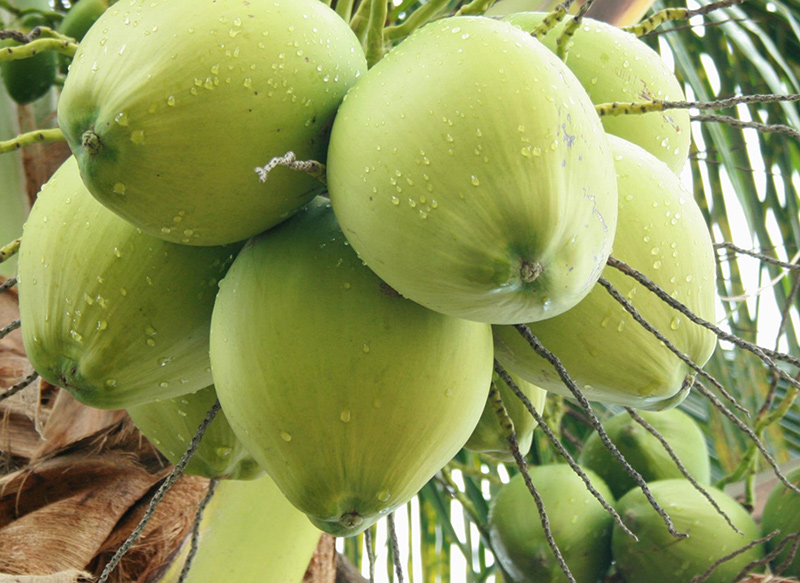 There wasn’t a single coconut to be found in Brazil when Portuguese explorers first set foot on its shores in 1500. It was only in 1553 that the first coconut palm was planted in Bahia. Colonists were amazed at how well it took to the sandy soil, bearing fruit after a mere 6 years compared with the 20 years it often took in India, the original source of this giant nut.

As Brazil developed over the centuries so did the culture and cultivation of coconut palms, whose flesh and milk became staple ingredients in dishes both sweet and savory. However, for much of Brazil’s history, the only way to consume coconut was to buy the dried fruit, smash it open, scrape the flesh from the shell, and grate or pulverize it – a laborious, time-consuming and messy process. It wasn’t until some 400 years after that first coconut palm bore fruit that a new generation of Portuguese entrepreneurs returned to Northeastern Brazil, with an equally radical idea: to produce, process and distribute coconut throughout Brazil, using innovative new methods and technology.

It was with this goal in mind that Sococo was founded in Maceió, capital of the state of Alagoas, in 1966. Within three years, the company had introduced two pioneering products to the Brazilian market: packaged grated coconut and bottled coconut milk. In doing so, it created a small culinary revolution.

By the end of the 1970’s, the Sococo brand name had become synonymous with products whose quality, flavor and texture were prized by simple home cooks as well as sophisticated restaurant chefs. Within 15 years of its establishment, the company had achieved a dominant market presence with over 50 percent market share in terms of grated coconut and coconut milk.

It was around this time that Sococo pulled off another pioneering coup by investing in a coconut farm in the depths of the Amazon rainforest. Prior to this, since colonial days, coconuts had only been cultivated along the coastal regions of Northeast Brazil. However, in 1979, having undertaken scientific research in partnership with the prestigious French Institut de Recherches pour les Huiles e Oléagineaux (IRHO), Sococo had discovered that the Amazon’s soil and climatic conditions made it the most favorable spot on the planet to cultivate hybrid coconuts.

The resulting farm in Mojú, 110 km from Pará’s capital of Belém, became the largest, most productive and most sustainable coconut plantation in Brazil, with 8,500-hectares of coconuts set amid 12,000 hectares of preserved Amazonian rainforest. It also set Sococo apart from all its competitors by transforming it into Brazil’s only producer of coconut products that controls the entire process from beginning to end.

Paulo Roberto, current managing director of Sococo has been at the company for over 30 years. “That we’re the only players in the marketplace that have our own plantations and production facilities make an enormous difference,” he declares. “Today, Sococo has a total of more than 1.6 million coconut palms, which makes us extremely self-sufficient. It also gives us a great advantage in terms of the uniformity and quality of our products. This is a major reason why the company is market leader – in spite of the fact that our products are more expensive than those of our competitors.”

Up until the present, Sococo’s leadership status in Brazil had been the result of its two traditional main products: coconut milk and grated coconut. However, as Roberto points out, the market for these products is mature. “Today Sococo items can be found in 93 percent of commercial establishments that sell coconut-derived products,” explains Roberto. “At the same time, there’s limited demand for these products in countries where coconut isn’t part of the traditional diet and is viewed as an exotic item.”

“For these reasons, beginning next year, the most important product in our catalogue will be coconut water.”

Sococo has been selling coconut water since the 1990s. Like many of its competitors, it produces reconstituted blends of coconut water that many consumers have become accustomed to. Even so, its water is of better quality than most of its Brazilian competitors who rely on cheaper (often inferior) coconuts from Asia, which they then reconstitute in Brazil. Meanwhile, Sococo is also the only company that sells a line of pure, quality coconut water that an increasing number of customers are demanding, both at home and overseas.

Driven by its much-touted health and isotonic benefits, coconut water has massive domestic and global market potential. According to Roberto, Sococo is ideally poised to take advantage of an imminent coconut water boom that he predicts will expand by more than 10 percent a year. Indeed, Roberto attributes Sococo’s 14 percent growth in revenues over the last three years to the success of its popular lines of coconut water, which include a diet version as well as beverages that combine coconut water with fruit juice.

“A major differentiating factor in our favor is that we’re the only ones in the world who grow our own coconuts for our coconut water,” declares Roberto. “Coconut water production is an industry, but as cultivators with our own plantations we possess an agricultural vocation that other players just don’t have, even though they know how to sell and distribute, but not how to grow the best coconuts. It outsources its coconuts, while we accompany the process from planting to harvest. This is particularly important because you’re not dealing with a potato that takes 3 months to mature, but a nut that takes 6 or 7 years to grow into a harvestable product.”

As it looks toward the future, Sococo’s main focus is on how to further ramp up its coconut harvest in order to satisfy not just Brazil’s, but the world’s thirst for coconut water. Currently, between its farm in Mojú and a second 2,500-hectare plantation in Santa Isabel, Pará, the company harvests 1 million coconuts a day, which yield annual revenues of around R$1 billion (roughly US$3.5 million). But within the next 7 or 8 years – the time it takes to produce coconuts on an economic scale – it plans to acquire new areas and plant an additional 200 hectares in the Amazon.

“Although we have the technology and structure to do this now, we’re a very orthodox company and have always done things step-bystep in order to maintain stability. Amid Brazil’s economic chaos, one has to keep one’s feet on the ground at all times. As such, we never borrow capital and invest only our own resources. We’ll only make a big leap onto the world stage when we have enough coconuts to do so.”

When Sococo is ready to make the leap, Roberto estimates that sales of coconut water to thirsty clients in Europe, North America and the Middle East will cause exports to jump from 5 percent to 20 percent of its business. “Right now, the average person consumes 70 liters of soft drinks a day, but only 650 ml of coconut water a year. Such a gap underscores how much room there is to grow.”

As a conservative company that’s been at the cutting-edge of coconut production for over 50 years, Sococo is certainly poised to not only benefit from, but spearhead such growth. As Paulo Roberto sees it, this is both a challenge and an opportunity.

“Just as Brazil is at the forefront of global coconut production, Sococo is the most advanced player within Brazil when it comes to production and technology. We can’t import technology from Asia or copy competitors because they’re far behind us. That we’re so ahead means we have to create everything, all the processes and technology, ourselves.” He laughs. “And that’s our biggest problem.”