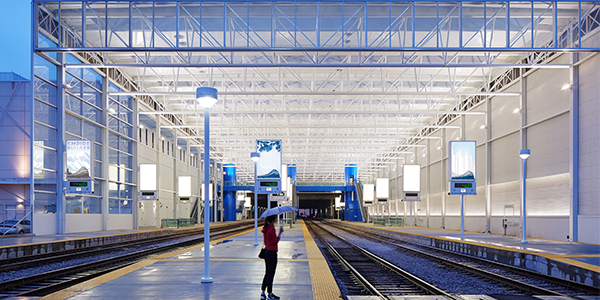 The 2002 Major League Baseball All-Star Game brought the nation’s spotlight to downtown Milwaukee. But when it comes to lighting Milwaukee, one company deserves the spotlight, and that’s Roman Electric, a key player in the building expansion of the downtown Milwaukee area. Recent electrical work performed by the company includes an18-story addition to the Hilton Hotel, the country’s first indoor urban water park, and a new eight-story technology center for Johnson Controls, headquartered in Milwaukee. In February 2002, the company completed the reconfiguration of a 500,000-square-foot manufacturing facility for Bombardier, a leading outboard boat motors manufacturer.

Roman Electric is not a newcomer to Milwaukee. The company was founded in that city by Roman Rose as a one-man shop in 1929 just a month before the infamous “Black Thursday” stock market crash. Initially, the company sold appliances. During the late 1920s and early 1930s, many of the company’s customers for its appliances didn’t have the proper wiring in their homes to run the appliances they bought from Roman, which is how the company became involved in the electrical wiring area.

A great example of the foresight and ingenuity of Roman Electric occurred during the 1930s when the Roses conducted electric range cooking classes, which often attracted large crowds because electric ranges were such a curiosity then. The Electric Company, co-sponsor of the classes, provided a home economist to do the cooking. Meals prepared were served to attendees and door prizes also were awarded to encourage attendance. The demonstrations spurred the sale of electric ranges as well as the wiring needed for them.

In the beginning, Roman Rose handled both residential and industrial wiring but growth was difficult in the 1930s. World War II changed that. Industrial plants converted to wartime production to satisfy the huge need for military goods. As industrial power require-ments increased, the electrical industry also expanded. To satisfy the growing demand for service, Roman Electric added more electricians. After the war, the housing boom continued to spur economic growth. For Roman Electric that meant increased activity in a growing variety of residential, industrial, commercial and institutional projects. The original building housing the appliance store and electrical shop was razed in 1956 and a larger building was constructed.

Blooming like a rose
“Today Roman is one of the largest electrical contractors in Southeastern Wisconsin,” said President Phil Rose, grandson of founder Roman Rose. “The company handles a broad range of industrial, commercial, institutional and residential work. We can assist customers that have suffered power outages and short circuits and we can also provide lighting renovation, motor controls, high voltage wiring and underground wiring, among other services.”

Now nearing the end of its eighth decade, Roman Electric Company is a $52 million contractor with more than 450 employees. About half of its work is new construction with the other half split between remodeling and service. Roman serves a growing range of industrial, commercial, residential and institutional customers – some in other states – offering electrical services from common to complex.

In order to arrive at success, the Rose family had to handle some difficult transitions. Following the death of founder Roman Rose, the company was helmed by his two electrical engineer sons, Gerv, who became president, and Greg, who became vice president. Under their watch, the company experienced solid growth and rapid expansion, particularly during the 1960s when the company pioneered the installation of electric heat systems, then in their infancy. Roman’s expertise in electric heat resulted in commercial and industrial work as well. A growing emphasis on design/build construction, especially industrial buildings, also developed in the ’60s.

Developers wanted contractors who could provide completely engineered buildings including electrical installation. Because Roman Electric offered a full range of electrical design, engineering, installation and maintenance services, it became involved in more projects from beginning to end. By the 70s, Roman also had become expert in installing, rebuilding and repairing overhead crane and machine tool motor components in a variety of industrial applications.

Added Bruce Janczak, vice president of development, Roman Electric has grown its business by employing a philosophy that couples proactive practices with personalized involvement in its customers’ activities. The company participates in community events as well as the major milestones of everyday life. Take, for example, a customer who was taking his wife out to dinner for their 10th wedding anniversary. Janczak made sure a bottle of wine was sent to the table, compliments of Roman Electric. “We’re not just a contract firm, we’re truly relationship driven,” said Janczak. “Our customers are friends and business partners, not just commodities.”

Electric expansion
Bursting at the seams in 1974, Roman Electric bought a sprawling single-story building with a large parking lot centrally located near the I-94 freeway at 640 S. 70th street. After extensive remodeling, the 13,000-square-foot facility became the company’s new office and warehouse. New and growing technology in the 1970s and 1980s meant added opportunity for those who were prepared. Roman expanded its scope via new skills, knowledge and equipment. The company installed electrical systems for NC tooling, office computerization, programmable machine controls, fiber optic wiring and other state-of-the-art technology.

Roman jumped into the telecom market 15 years ago. Now the company can install data and telephone wiring systems, and sell telephone equipment. Roman provides Internet connections as well. The company can provide a full set of IT services that include consulting, specialized services, Web site hosting and ISP.

“We sell dial up services strictly as a wholesaler, but we see ourselves as a single source for computer, data and voice services; e-commerce systems; digital systems, digital networks and building security systems,” said Phil Rose.

To expand its base of knowledge, Roman Electric encourages continuing education and training for a staff of 250 electricians and its project management group. The company’s unusual employee longevity contributes to its impressive pool of knowledge. In late 1985 Roman Electric expanded its geographic and customer base by purchasing Ruud Electric, a Sturtevant, Wis., electrical contractor serving a variety of customers in the Racine/Kenosha area. General contractors represent the company’s largest group of customers. Roman Electric’s customer base also includes industrial and commercial firms, building owners, individual homeowners and small businesses.

“We can provide terrific value to home builders with the wide range of services we offer,” said Phil Rose. “We’re looked on in the industry as a value added partner. We still consider ourselves to be a local company.” Servicing the southeast Wisconsin and northern Illinois regions, at present the company is experiencing a steady upswing in its business, he added.

“Roman’s success depends on a team of experts working together,” said Phil Rose. “That includes experienced project managers, electrical engineers, state-certified professional engineers and a professional designer, highly trained electricians, and knowledgeable support staff. A fleet of 85 service trucks and investment in the most effective tooling assure customers of service as needed around the clock.” The goal, added Janczak, is to never allow complacency to rule. “This company will change all the time,” he said. “You can’t stay even.”