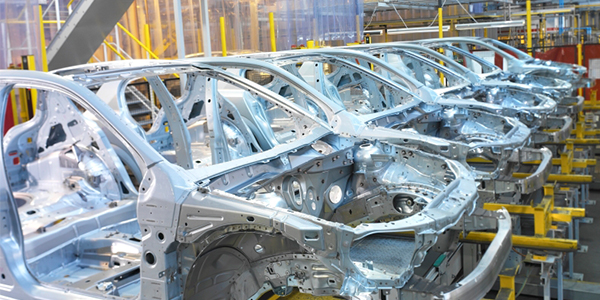 In today’s economic climate, automotive suppliers have had to be careful that their usefulness doesn’t go the way of the horseless carriage. Forget obsolescence; in the current scenario, the carriage would be heading offshore to be manufactured.But businesses with their thinking caps on are leveraging their expertise to tap into new markets. This is why Fujitsu Ten Corp. of America is manufacturing products such as sun roof and conveyor control systems, which may seem a far leap from what it traditionally has produced: car radios, amplifiers and speaker systems. But Fujitsu Ten Corp. knows its way around electronics production and has positioned itself, through a major reformation of its plant in Rushville, Ind. – the parent company’s only U.S. production facility – to be a key supplier of such systems, as well as vehicle electronics, in an effort to grow profits.

Driven to substantially reduce costs, Executive Vice President and General Manager Richard A. Marks, of Fujitsu Ten’s Rushville, Ind., operations, (RIO) said his company made the decision to transition from audio to vehicle electronics – or motoronics – to not only decrease operating costs but also to enhance production. But the mission has another face to it. “We’d like to diversify and go after other types of business as we continue to improve our productivity,” says Marks.

This is why Fujitsu Ten RIO has been able to garner two contracts that have been relatively outside the sphere of traditional tier one automotive OEM production. As a tier two contractor, the company has, for the past year, built sunroof control modules for Webasto Roof Systems of Kentucky. “These modules control the opening and closure of the sunroof system. Because they need sensing systems for safety purposes they are becoming increasingly electronic.” Fujitsu Ten also has been producing speed controls for conveyor systems manufactured by Dart Controls in Indiana. Winning these two contracts, says Marks, “shows we are cost competitive and have the capabilities to produce a broad range of products.”

The company will continue audio production until the end of fiscal year 2003 (concluding April 2004) at which point the remaining audio business will be comprised primarily of audio product distribution and customer service. Audio production will take place at the company’s Mexico facility, which RIO helped to establish and make operational. Fujitsu Ten RIO also hopes to become a bigger player as a contract manufacturer producing printed circuit board assemblies, and assembly of other products serving a variety of industries besides automotive.

This manufacturing transition – what the company called a reformation, Marks says – took place in the period of about six weeks, begun in mid September and completed at the end of October. The company invested a little over $1 million to make a facilities change with a goal of gaining new motoronics business from Toyota as well as others and to solidify RIO’s role as a safety-related ECU motoronics manufacturing facility. Among the capital expenditures were new Siemens machines – very precise, high speed parts placement machines – as well as new dust-free ceiling tile and flooring to make the manufacturing environment as clean as possible. Now, items such as cardboard boxes, pallets, and street shoes are prohibited on the manufacturing floor.

“We’ve had to institute dust-free manufacturing to assure the quality of safety-related motoronic products,” Marks says, adding that shoes and cardboard boxes bring in dirt and debris. “Production processes using smaller components are less tolerant of environmental contamination.” Employees are required to wear special ESD shoes, to conduct static electricity away from components that otherwise could be damaged by any electro-static discharge.

In addition, dust-control air lock systems were installed to control access to the manufacturing floor. The entire production floor was rearranged and renovated, the warehouse was rearranged and a host of new production process refinements were put into place to streamline the manufacturing process. These include numerous systems and process Kaizens and production management systems to reduce all waste throughout the plant. For example, says Marks: “We used to measure performance by calculating efficiencies,” a methodology that delivers more concept than hard fact, he adds. “Now we measure actual assembly minutes per unit.” The result of such new programs: “We are able to produce today what we used to do with a hundred more people. We’ve had a 50 percent reduction in assembly time.” Marks adds, “We took this (reformation) very seriously in order to achieve maximum efficiency.”

The proof is in “Toyoda”
In the next year, RIO is expected to process five million units, both in production as well as distribution. Sales are projected to reach $85 million, and will reflect the hard work and dedication of RIO’s employees to bring out a true “reformation.”
Further proof that RIO is on target in its mission is the current attention being paid to the supplier by Toyota. Recalls Marks, last March, Shuhei Toyoda of the Toyota car family and current head of European manufacturing operations, visited RIO. “We had done a lot to install Toyota Production System concepts into our manufacturing system,” explains Marks, “and we showed him our progress.”

Specifically, Toyoda was shown production on one of the audio lines the company retained with a goal of reducing assembly time from 15 minutes to five minutes, requiring more process refinement, automation and the elimination of waste. “When he was here we weren’t quite on target,” Marks says, “but he told us to let him know when we hit the target.”

When RIO achieved its goal, it communicated with Toyoda and received encouraging feedback recognizing the plant for its achievement. Ever since, Toyota’s Supplier Support Center has been using RIO production lines to train teams of Toyota managers on the Toyota Production System.

“This is pretty unique,” says Marks. And very telling of a company that has been able to turn on its heels and embark in new directions, a mobility trait, you might say, inherent in the horse, minus the carriage.