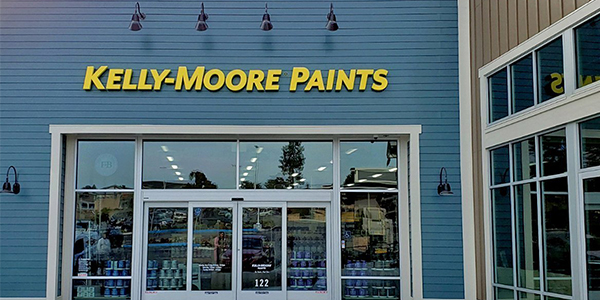 The aroma arising from a freshly opened can of Kelly-Moore paint is more than just the scent of a high-quality product. It’s a heady waft of regional U.S. history.

Expressed in terms of contemporary parlance, the taming of the Wild West was all about development. The saga starts with the first emigrant wagon train that embarked for California in 1841, then carries through chapters involving the completion of the transcontinental railroad, which created an influx of new settlers; the construction of the Los Angeles Aqueduct, which helped make southern California livable; and the population explosion that followed World War II, which generated a West Coast housing boom.

This year, Kelly-Moore Paint Company, based in San Carlos, Calif., is celebrating its 60th anniversary, which places its birth at 1946, squarely within that post-WWII boom, a circumstance that enabled the business to flourish.

In the ensuing half-century, Kelly-Moore became an entrenched regional enterprise, developing an enviable reputation as a top-flight paint manufacturer, serving painting professionals throughout the U.S. West and Southwest regions.

Kelly-Moore is now one of the largest employee-owned paint company in the United States. The company sells more than 350 types of paints, finishes, and accessories to professional contractors and painters, as well as consumers who comprise the “do it yourself” (DIY) market. But the professionals make up the bulk of its business.

“The DIY customer represents 14 percent of our business, and that’s a healthy chunk. However, our core is obviously comprised of the professional painting contractors who make up 68 percent,” says Mark Zielinski, director of marketing for Kelly-Moore. More specifically, that professional “core” includes the small painter and small repaint painter. “These are the customers who come in during the morning, grab their cup of coffee and their 40 gallons of paint and then go off and work on a residential home,” says Zielinski. “The next morning, they’re back.”

These kinds of customers may be deemed “small,” but as a collective, they bring in large revenues. “That kind of business is very attractive for paint companies. We have more than 125,000 professional accounts on the books,” reports Zielinski. To accommodate this valuable market segment, Kelly-Moore has set up a network of strategically located neighborhood paint stores. That’s one of the reasons why it has become known as “The Painter’s Paint Store.”

Opportunity Always Knocks Twice
The company was formed by William H. Kelly and William E. Moore to supply paint for the new structures arising on the Western landscape during the late-1940s housing boom. The founders targeted their product to professional painting contractors who needed top-quality paint and knowledgeable, efficient service at a reasonable price. That initial focus blossomed into an “evergreen” business. “After those houses were built, people continued to re-purchase and repaint those same structures with the premium products, and that is what helped put Kelly-Moore on the map,” explains Zielinski.

Today, Kelly-Moore employs essentially the same strategy in reaching other areas in the West. “We benefit from new housing, as construction continues in California and in other areas such as Texas,” indicates Zielinski. “But the real business – the substantial, ongoing business that will be picked up over the next 20 to 30 years – continues to involve the repainting of those new homes, either through DIY sales or to our repaint contractors.”

By following that established course, Kelly-Moore has expanded from a single manufacturing facility and store in San Carlos into one of the largest employee-owned paint company in the United States. Today, the company has more than 155 retail stores in nine states west of the Mississippi, three manufacturing facilities located out west, and well over 2,000 employees. Company departments include manufacturing and distribution, sales and store operations, human resources and loss-prevention, merchandising, construction and planning, marketing and advertising, information systems, training, color management, sundry purchasing and pricing.

20-Million Gallon Hat
Along with its San Carlos facility, Kelly-Moore now has two more manufacturing plants strategically located in key markets: Seattle, Wash., and Hurst, Texas. Combined, these three state-of-the-art facilities produce nearly 20 million gallons of paint each year.
“The main plant in San Carlos covers the bulk of the volume, which is distributed to areas in California,” says Zielinski. “The Seattle plant, which is ISO-certified, manufactures the product that we ship overseas. The Texas plant covers all stores in that state as well as Colorado, Arkansas and Oklahoma.”

The company established a reputation for quality products by manufacturing and distributing its own paints, and checking and re-checking the integrity of each batch before it leaves a plant. To support its manufacturing process, Kelly-Moore created its own laboratories that conduct quality-control tests.

Further, the company has formulated its products especially for application in the geographic areas within its markets. “Probably the biggest single concern in formulating product for the West Coast and Southwest regions is the extreme ranges of temperatures,” explains Zielinski. “Paints need the appropriate adhesion and flexibility to hold and last in those kinds of temperature ranges. The amount of temperature variance, from day to night and from summer to winter, is extreme.”

As such, Kelly-Moore only uses the highest quality raw material and the most advanced coating technology available. Many of its formulations are 100 percent acrylic, because of the higher performance provided.

“We also have a lacquer line and an industrial coating line,” informs Zielinski. He adds that the commercial and industrial lines represent areas of growth for Kelly-Moore. “Most people think we’ve keyed our existence to the small repaint painter, but that’s not quite true,” he says. “We now have products and representation in the commercial market, even though we are not quite as well known in that area. Also, within our industrial line, we distribute some of the best U.S. products for painting bridges and water tanks. Again, we are not quite as well known for that, but we’ve developed strong partnerships and technologies, so we’re becoming much more than merely a repaint company.”

Kelly-Moore has also developed a line called eCoat, which are recycled, post-consumer paint products blended into a quality paint that helps preserves the environment. eCoat is made with a minimum of 50 percent post-consumer waste paint and are completely remanufactured to assure consistent performance. They’re produced at Kelly-Moore’s fourth production facility, a smaller site located in Sacramento, Calif.

During the manufacturing process, the paint designated for recycling is sorted and tested, then filtered, mixed and adjusted for quality. New ingredients are often added to batches to assure consistent performance, coverage and color consistency. The process assures good adhesion, abrasion resistance and durability. eCoat come in both flat and semi-gloss enamel finishes.

In addition, Kelly-Moore distributes sundry items that help painters complete their jobs in faster and easier fashion. These include products for cleaning and preparing the surface, applying the paint to the surface, and clean up. Items include brushes, caulking, clothing, masking, rollers, sprayers and thinner.

Business Issues
Zielinski reports that Kelly-Moore has experienced growth in the 3-5 percent range in the past several years. He indicates that there has been a recent slow-down in the new housing and commercial markets, related to rising interest rates. However, the repaint business continues steady. As such, the company has strong market shares in both California and Texas and, in the past 24 months, has initiated major expansion plans in its markets. “We continue to move at a clip of 10 to 12 new stores each year,” he says.

Another recent trend the company has dealt with – one that has a negative impact on business due to costs – is the rising price of oil and petroleum products, which affects a significant portion of its own products. “All of the resins we use in our plants have been affected in one way or another by the cost of petroleum,” says Zielinski.

He adds that the company is trying to shield customers from that cost impact, but escalating petroleum costs are making that difficult. “Usually, you can anticipate a price increase to the customer at least once a year, but that’s almost impossible right now,” he says. “In a normal year, you may raise your price one or two percent, and now it is not unheard of to go with 5 or 6 percent, which is something I’ve never seen since I have been in the business.”

But one thing the company will not do is devalue the integrity of its products. “We try and absorb as much cost as we can for as long as we can before we put together another price increase,” says Zielinski, “but we won’t adjust our products to lessen costs.” As Zielinski suggests, the Kelly-Moore name signifies consistency. Formulations may have been updated a few times, but only to improve the product. When painters crack open a can of Kelly-Moore, they know exactly what they’re getting. The familiar aroma that fills their nostrils arises from high-quality product that has served its markets well for the past 60 years.