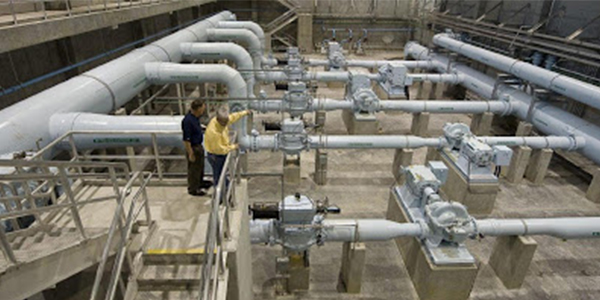 At first glance, this setting would seem a far cry from the company’s beginnings in the heart of downtown Chicago, where ECII first opened for business in 1908 as Bastain Blessing Company. The new concern produced industrial carbonation systems and other restaurant equipment, such as pressurized carburetion systems for soda fountains. Because carbonation is produced and stored under pressure, the company already had the background and expertise at its disposal to produce valves and regulators for welding equipment, whose use increased extensively as the pace of the industrial revolution quickened.

Starting in the early 1920s, RegO® became the brand name of equipment produced by Bastain-Blessing. The name RegO® comes from combining the words “regulator” and “oxygen” (the two major components of welding equipment). Also in the 1920s, Phillips Petroleum discovered propane gas as a byproduct of oil well drilling in Texas. It wasn’t long before Phillips realized its potential as a fuel, and the company began looking for someone to manufacture the equipment necessary to harness this fuel. The link between RegO® and propane was born, and RegO® designed and patented much of the equipment that is still in use today.

Pointing the Way
Since that early period, there has not been much change in those original basic designs, according to Brian Davidson, RegO®’s director of sales and marketing. From the beginning, ECII, under the RegO® name, set the standards in a self-regulated industry. In addition to its equipment innovations, RegO® devised much of the literature and technical data that was adopted by both the industry and, eventually, the regulatory boards that would oversee it. RegO® pioneered this industry in many ways, says Davidson. In fact, he adds, what is now known as the National Propane Gas Association was started in Chicago with the help of RegO® and other early marketers.

The propane industry saw its biggest growth spurt after World War II. As returning soldiers and their families began to move to the growing suburbs, there became a need to provide energy to these burgeoning neighborhoods. The infrastructure for electricity and/or natural gas didn’t yet exist, and propane was viewed as the natural fuel source for these families and their changing needs. RegO®, along with the propane industry, boomed from the middle 1940s to the late 1960s. Propane was used to heat homes and hot water, to cook and to run farms across the country. RegO® was there every step of the way, developing the valves and regulators that made this possible. As the energy crisis loomed, propane became a cheaper, largely domestic alternative. The growth of gas grills and gas logs kept the industry moving towards the 21st century. Right now, Davidson says, depending on the area of the country, approximately 5 to 8 percent of U.S. homes are heated with propane. Many more use propane in a more limited manner, such as on barbecues and with camping stoves.

A new technology, the fuel cell, could take the propane industry into the 21st century, Davidson says. Now in its infancy, fuel cell technology is being pioneered by companies such as Plug Power and H Power, which are developing cells the size of an air conditioner that could take propane gas, pull out the hydrogen and then convert the hydrogen into electricity.

Theoretically, a house built in the middle of nowhere could install a propane tank and a fuel cell, throw in a cell phone and have everything needed to sustain it. With this technology, Davidson adds, there is no worry about ice or windstorms blowing the power lines down. There would be no need to worry about electricity brownouts, either. When fuel cell technology is developed to the point that units are as inexpensive as central air conditioners are today, it will open up a whole new market for propane, Davidson says. If the propane market share increases even 2 percent, he adds, it would be a huge boom to the equipment makers in the propane industry. Wherever the technology leads in the 21st century and beyond, RegO® will be right there with it, making sure the equipment needs of the industry are met above expectations.

Among the company’s more notable achievements is the RegO® Multivalve®. It was originally designed in the 1930s to combine several necessary valve functions into one unit, which made more practical tank designs possible — a tank with fewer openings and smaller, less cumbersome hoods. Over the years, the Multivalve® has kept pace as the industry has changed. Other industry standards originally patented under the RegO® brand name include the Double-Check Filler Valve, Pop-Action Relief Valves, the Chek-Lok® Valve and the MultiBonnet®.

In addition to all of its valve designs and patents, RegO® innovated many of the standards for propane regulators, including the “pancake” body style that the rest of the industry has come to adopt. RegO® regulators are crucial components in both industrial and domestic installations, and are used worldwide wherever the regulation of propane is required.

Propane and Propane Only
As Davidson explains it, ECII has established itself in a niche market. What makes the company special, he adds, is the fact that it is one of the few companies in the industry that exclusively focuses on the development and manufacturing of propane equipment. “We aren’t developing things for natural gas or other non-related industries,” Davidson says. “Our exclusive focus is on propane, and it will continue to be.

“We do all of our own machining of products, which is unique in our industry,” Davidson explains. One testament to ECII’s commitment to the industry and the future is the fact that in the last decade, the company has added 220,000 square feet of factory space in two buildings. “We have an assembly plant here in Elon, N.C.,” Davidson says, “a plant that also houses our headquarters. We added a machining plant nearby in Whitsett, and a regulator plant just up the highway in Conover.” With the addition of the latter buildings, ECII’s total manufacturing space is approximately 320,000 square feet.

Whether the future of the propane industry will lay with fuel cells or with some as yet undeveloped technology, RegO® remains committed to the fact that it will play a part in propane’s future. If the past is any indication, it’s probably a safe bet that RegO® will not only play a part in that future, it will be the major player.