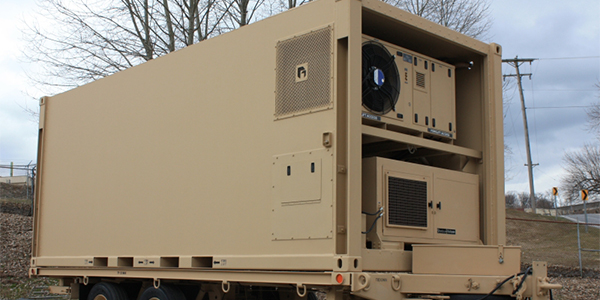 Several years ago, Gichner Shelter Systems decided that its military shelters and enclosures could also be used in the non-military world. The Dallastown, Pa.-based manufacturer opened its Business Products Division, and began marketing its product line as shelters for commercial electronics and telecommunications equipment. Today, the commercial market still presents strong growth opportunities for Gichner — opportunities that fit well into this manufacturer’s capabilities and more than 30 years of experience.

Commercial customers now know what every branch of the U.S. military has known about Gichner all along: This is a special manufacturer, one committed to quality and thorough customer satisfaction. Gichner now stands as a prime supplier to both the military and the commercial sector — a single source for platform design and electronics integration, and a provider of turnkey electronics and communications shelters.

And a very flexible provider, at that. Scott Sarine, the company’s director of sales, says, “We have two cultures. We operate almost as a job shop with large-run capabilities. We have the ability to do both large-quantity contracts and small quantities — even ones and twos of highly customized units. This is the greatest key to our success. It allows us to compete with both small and big companies in this market.”

Strong Ally
Gichner began building on this dual culture from the time of its founding, in 1969. From the beginning, the company’s core product has been transportable electronic shelters. In its 32 years of existence, Gichner has successfully produced more than 70,000 of these shelters, which have been used by every branch of the U.S. Armed Forces and by the militaries of several allies of the United States. In both volume and quality, the company can safely claim to be the world-class leader in this category.

Power Performer
Sarine explains that Gichner’s shelters actually serve as platforms for electronic systems. The shelters often include subsystems such as air conditioning, racks, power distribution, lighting and signal wires. They serve as platforms for radar, communications or surveillance systems, or as enclosures for test and maintenance facilities. For its military customers, Gichner typically does its work under schedule pressures, since prime contractors sometimes release their work late or make overly optimistic estimates in the time needed for product development, prototype engineering and production. Yet the company has met every design engineering and production challenge it has ever faced, thanks to its turnkey abilities at engineering, planning, procurement, production, integration and testing.

Three recent examples demonstrate the high regard the U.S. military holds for Gichner. In 1996, Gichner won a contract for rigid wall shelters, containing various electronic equipment and space for two operators, required by the U.S. Army’s Standardized Integrated Command Post System. The contract called for the company to produce 125 shelters, and included options for up to 400 more. The Army exercised its first option in March 1997, well ahead of the contractual option schedule, and has since exercised its options on all but 19. Gichner won this business despite the fact that it was not the low bidder for the project; according to the company’s account of this agreement, the Army judged its shelters to be “technically superior” and “worth the payment of the price premium.”

In September 1997, the U.S. Air Force chose Gichner as the contractor for the AN/TPS-75 Radar System Shelter Replacement Program. Again, the company received the program even though it wasn’t the lowest bidder. In awarding the contract, the Air Force praised Gichner in almost the same terms the Army used for the rigid wall shelters: “Their proposal was evaluated with no weaknesses,” the Air Force said. The following year, the Air Force exercised an option for a second development/test unit, and has since purchased several more.

Earlier in 1998, Gichner was awarded a build-to-print contract for the modular extendable rigid wall shelter by the U.S. Marine Corps Systems Command. It was a unique move by the Marines in that it chose Gichner in a competition over both the original developer and the original prototype producer of this form of rigid wall structure. The contract with the Marines calls for 10 shelters and includes an option for an additional 22 units.

Serve and Protect
In creating the Business Products Division, Gichner recognized that commercial businesses needed protection for their sophisticated, critical electronic systems from both thermal stresses and outside pollutants. The company has been marketing this end of the business as the ultimate protection for its customers’ electronics systems. Sarine says, “We’ve been telling our commercial customers that they can bring electronics into these shelters as protection from the outside environment.”

The linchpin of the commercial product line is the PRO-TECH series of cabinets. PRO-TECH enclosures protect their contents from weather, sand, dust and temperature extremes encountered anywhere in the world. These cabinets are made with an exclusive bonded-panel construction, which eliminates hot or cold “shunts” in the panels by incorporating thermal barriers at all structural-member locations. The design also includes rigid insulating foam with a high R value. The end result is a thermally efficient cabinet that both protects electronic equipment and reduces utility costs.

The PRO-TECH series includes two-bay, four-bay, six-bay and drop-over versions. They are made with a closed heating/cooling system and recirculate the inside air, thus reducing the interior levels of outside pollutants. The series also comes with options such as a separate, ventilated battery compartment to ensure the integrity of the electronic systems.

Structures for Growth
The Gichner corporate structure also includes Optima Electronic Packaging Systems, based in Tucker, Ga. Founded in 1962 and acquired by Gichner in 1986, Optima is a designer, manufacturer and distributor of electronic enclosures that serves OEMs in the communications and electronics industries throughout North America. The division’s signature, highly engineered products use an extruded aluminum construction offering a high strength-to-weight ratio and a contemporary appearance. Optima’s enclosure line includes standard, modified standard and customized structures.

Currently, Gichner’s sales are still weighted toward its military customers. “This market evolves slowly,” Sarine says. “When we win a new military contract, we have to make product that meets their requirements.” Judging, however, from the previously mentioned case studies, Gichner has a strong track record in meeting and exceeding what customers want.

It’s that track record that Gichner is taking forward as it prepares to meet the promise of the commercial sector. Sarine says this is the area that offers the best growth prospects for the company in the next few years. With its capabilities to do both small runs and large runs, the commercial sector has found in Gichner a strong and capable partner.