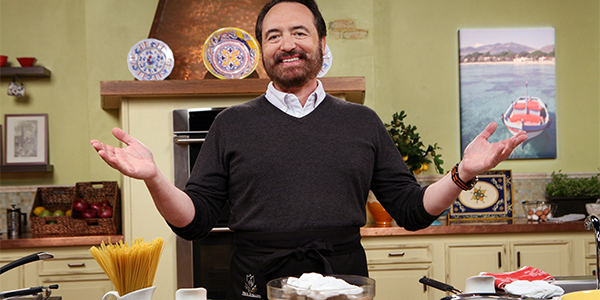 You already know the Horatio Alger story about the dishwasher who worked his way up to become a successful businessman. This isn’t that story. This is the one about the successful businessman who became a dishwasher.”My wife [Nanci] and everyone that knew me at the time thought that I had completely lost my mind,” Nick Stellino says of his departure from a lucrative job at a Wall Street firm. “I love cooking. All my biggest deals and stock sales were done around food.”

Stellino was going to buy a restaurant but decided to begin at rock bottom instead in order to learn the business. “I started out as a dishwasher and I paid the owner of the restaurant $5 a day to let me wash dishes. It was the smartest investment.”

Stellino grew up in Palermo, Sicily, surrounded by family and food. “Food preparation was an essential reality of life together. The whole family connected in the kitchen: my grandma, my aunt, my mom, and other relatives. The kitchen was where everybody would hang out, tell stories, gossip. When the family came together as a group it made me feel part of something. So I always connected food preparation with the other feelings.”

Palermo proved a perfect training ground for not just Italian but world cuisine. “Palermo is the last stop that you make before you hit the coast of Africa so it’s part of Italy but a cocktail of many people and traditions – Muslim, Spanish, French,” he says. These cultures all influence the diverse cuisine of the region. “French techniques mix with Greek techniques, with Spanish ingredients. It’s a vibrant personality. The region of Sicily is unique because of that. That relates in the way we look at the world and the way we are.”

Stellino’s cooking style is exquisitely varied featuring simple yet innovative recipes. Why can’t we all make baked tuna with tomato pesto? Pasta with sausage and pumpkin sauce or shrimp fritters with roasted garlic sauce? Stellino takes viewers step by step through the process of cooking complete meals, captured by exceptional motion picture production and full-length programming that only public television offers. Of course Stellino owns the studio, the programs, distribution rights, etc. You would expect that of someone with his business background. But what possessed him to leave the financial sector and enter what he knew to be one of the riskiest lines of work?

“We all have a moment in life when something happens to us that forces us to reevaluate who we are and what we do,” Stellino says of the 1991 death of his beloved uncle Giovanni Boccato. “When my uncle died, it was a very devastating reality. He was a unique person in our family. All of us loved him. The whole family got together to see him before he died. I remember him taking me aside and saying, `Nicolino, you should not die without following your dreams.’ I had no idea what I wanted to do but I knew that what I was doing was making me a lot of money but wasn’t making me happy.”

Stellino soon quit the day job and got the dishwashing gig at a small trattoria where he worked his way up to learning the various stations, eventually making head chef. Next, he took apprenticeships at various restaurants, culminating as pasta chef at one of the nation’s top spots, Drago, in Los Angeles. He turned down an even greater offer as head chef at a Beverly Hills restaurant.

“When it was all said and done it was fun but I had ambition for other things. I always watched cooking shows and never liked the way they were made. My wife said, if you are so good, why don’t you make one? I came from a world where I used to move billions of dollars so give me a phone anyplace, anywhere and I can make something happen.”

Two years and exactly 2,365 phone calls later (he keeps track like anyone trained in finance), he found a London investor interested in a media property related to Italian food. The backer supported the launch of the television production. “They had a solid infrastructure knowing how to put a show together, package it, distribute via satellite, do a promotional run, sell books – things I had no idea about. It was useful to me to learn the business and understand how to get things done.”

The first series, Cucina Amore, was an immediate hit with home cooks attracted to Stellino’s easy, elegant dishes and relaxed cooking approach. “With my show, what you see is what you get. It is not a persona that I have. If you meet me on the street, that is the same guy you see on television.”

By 1998, Stellino was an experienced, confident executive producer with his own ideas. He parted ways with the investors, sold his equity in the company and started his own multi-media business. His state-of-the-art television production studios in Seattle are configured to demonstrate how to cook and the creative visual approach turns each recipe into a little movie. “In my show you get a complete story. The story of the recipe, how it’s made, the alternatives. It’s beautiful to see in an uninterrupted fashion. I am not going fast. I am not cutting my show to meet commercials on television.”

TV production and distribution were just the beginning. “I wanted to apply all the concepts I learned but had very little capital. I established a boutique production company and expanded [into] an agency to do public relations, promotional events with clients, custom videos and web sites,” Stellino explains. “So [clients] looked at it not so much as a media buy but as an all-inclusive series of services with personal appearances, and marketing strategies that depended on what the product was, regionally by market, nationally by market.”

Examples of his creative multi-dimensional ideas include adding custom videos to clients’ Web sites with cooking tips for the company’s products; for instance, explaining which olive oils to use in different cooking techniques, or ways to use sugar other than in traditional desserts: glazing carrots or making marinades.

“At the end of the day, it’s all about passion. If I don’t like a product I don’t want to be involved with it. I don’t care how much money they pay,” Stellino says. “The way I look at it is life is short so passion translates to everything we do, from a one-dollar purchase to a million-dollar purchase. If you want consumers to connect with your product you have to excite the dream that they can connect to. I create a program for a chain of stores that creates excitement for their own consumers so they will go to that store. We are talking about doing a newsletter for the Web site that connects to them with stories that use ingredients featuring my clients’ products, plus a series of cooking DVDs exclusively made for the store.”

Stellino is also the publisher of his cookbooks, allowing him to think out of the box to create a truly different publication. His newest book is “Dine In: Turn Your Home into Your Favorite Restaurant.””Dine In is the beginning of a completely different way of doing books. It is a designwe developed in which the back cover of the book opens up in a stand so you flip it as you would a calendar. It’s being done in such a fashion so that every page has a color photograph and a recipe.”

Stellino’s enterprises also include a popular line of pots and pans, Bravetti with Nick Stellino, sold on Home Shopping Network.

Stellino is a very accessible person who speaks in proverbs handed down from generations. “Between to say and to do there lies an ocean,” he cautions. “Money makes a wonderful slave but a horrible master,” according to Stellino’s father, Vincenzo.

Keeping the big picture in mind guides Stellino’s approach to cooking. “The core philosophy is that perfection doesn’t exist. Every once in a while you are going to burn food. You are still not going to go hungry because there is Chinese take out or pizza. Once you accept the prospect that you will not go hungry, then you can make your food with a sense of passionate adventure.”

It’s clear Stellino possesses a rare and powerful combination of creativity, ambition, and business savvy. “The reason I work so hard is because I love to be king,” he admits. “When I do my show, at the end of the day it gets done the way I want. I own the company, the distribution rights, the right to my name. I own everything. I am not an employee o anybody.”

Next on the horizon for Stellino may be a chain of restaurants. While this project is in the very early planning stages, he is pursuing the idea and investors to bring delicious, affordable true Italian cuisine to suburban restaurants. “I am tired of spaghetti with clam sauce, either white or red, meatballs and baked lasagna. It’s ridiculous,” he says. “If you look at my books you think, Why can’t we find this in any restaurants? Pine nuts and raisins, sauteed broccoli with sausage – stuff I dined on every day growing up.”

Lately, Stellino has lost nearly 50 pounds (through portion control and exercise), and cut off his signature ponytail, which

he grew as a sign of independence after leaving the financial sector, but it seemed to become what he calls a “costume. I don’t want anything to brand me,” he says. “If you have an idea, you have the ability to interpret that idea in concepts that can relate to others, be deployed in a strategy where financial gain can be had by both sides. That to me is a form of art and it’s got nothing to do with my ponytail.”