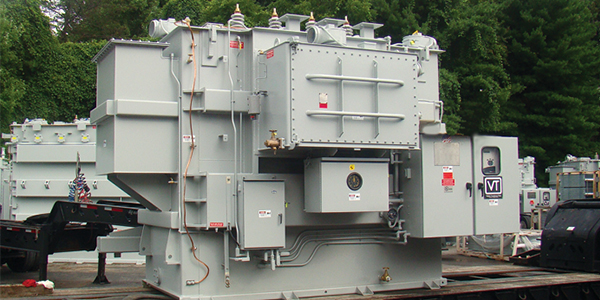 By combining the capital equipment of a big company with the values and flexibility of a small company, Pennsylvania Transformer Technology, Inc., has become a preferred choice as a supplier to electric utilities, municipalities, power-generation equipment manufacturers and residential cooperatives. Pennsylvania Transformer is a leading manufacturer of power transformers and three-phase voltage regulators, and has been operating under its motto, “Build the Best,” since its founding more than 70 years ago.

It has also gained strength in this marketplace through its core culture, which involves listening to its customers and reacting immediately to their needs. This is no mean feat given Pennsylvania Transformer’s customer base — companies that occasionally find that their transformer and regulator requirements may change in the course of a particular project.

“This market is dynamic,” says Ravi Rahangdale, the company’s current owner and president. “We might have a customer who looks for a transformer from us six months down the road. Then, one month into this project, the customer changes his mind and wants another transformer. Now, our competition might say, ‘No, your order is fixed.’ But we work with the customer to give them a product to fit that changing need.”

The fulcrum of this culture is communication, and Pennsylvania Transformer instills this in every level of its personnel. “If the president is present,” says Rahangdale, “he will speak with the customer and so will others from the top down. Changing an order isn’t frequent but it happens occasionally. If you don’t respond when it does happen, the customer remembers that for life. They also remember when you accommodate them.” Pennsylvania Transformer’s record for customer response has given it a place of distinction among power-equipment suppliers. “I’ve been told that we are now the go-to people for any transformer,” says Rahangdale.

Generating a Heritage
Pennsylvania Transformer’s product literature describes the company as “a relatively new corporation.” The company, as it is now constituted, was formed in 1996 when Rahangdale acquired Cooper Power Systems’ Canonsburg, Pa., facility from its parent, Cooper Industries. Its roots, however, date back to 1929, when Pennsylvania Transformer Company was founded by W.E. Kerr and Samuel Horelick in Pittsburgh. The company moved to the old Alcoa site in Canonsburg in 1946. Six years later, it became a division of McGraw Electric Company — which in turn became McGraw Edison in 1957 after a merger with Thomas A. Edison Company.

Ten years after this merger, McGraw Edison enlarged the Canonsburg plant to 1,250,000 square feet. In 1985, McGraw Edison was purchased by Cooper Industries. As part of Cooper, the Canonsburg facility achieved a milestone in 1990 when it produced a 400-megavolt-ampere, 230-kilovolt phase shifter — the largest core-form transformer in the plant’s history. When Rahangdale acquired the facility six years later, the company reverted to its roots by changing its name to Pennsylvania Transformer Technology, Inc.

Most of the Canonsburg plant’s output is the production of medium and large power transformers. Pennsylvania Transformer’s other facility, in Raeford, N.C., measures about 43,000 square feet under roof, and is devoted to the manufacture of small power and distribution transformers.

Equipped to Grow
The equipment in these plants speaks to the big-company look Pennsylvania Transformer has in its manufacturing. As Rahangdale describes it, the company’s machinery includes an automatic core cutter and core stacker made by Georg in Germany — “by far the largest and most modern of its kind anywhere in the world,” he says. Also, much of its equipment is computer-numerically controlled. “We have a CNC plasma machine to cut steel, a CNC router to cut insulating materials, a computerized automatic paint-mixing system and quite a few proprietary machines,” Rahangdale says.

Pennsylvania Transformer has also not been shy about capital investment. Rahangdale says the company put in $2 million in one year to upgrade its winding room, which now includes three vertical winding machines. Both of the facilities have also established enough off-line space to provide the company’s customers with flexible delivery schedules. This has made Pennsylvania Transformer better able to meet its customers’ needs. The two plants have based their quality-assurance procedures on standards set in place by the American National Standards Institute and the Institute of Electrical and Electronics Engineers.

Rahangdale characterizes Pennsylvania Transformer’s quality initiative as one of “employee empowerment. Each employee is responsible for their own work. They all fill out quality check sheets, which tell us that they did the job and certain other quality functions. So we don’t have to have people chasing after them.” Machinery and investment aren’t the only factors that go into the quality of Pennsylvania Transformer’s products. Research and development play a crucial role in this effort, and is under the direction of the company’s engineering staff. The company’s engineers have expertise in electrical engineering and mechanical engineering. “They work on new insulation systems and the finite element analysis of mechanical components,” says Rahangdale. “Sometimes they are out in the field analyzing problems, and this work, too, leads us to new systems. We lean on our engineers for guidance in many areas.”

The electricity market – which is currently characterized by many areas of the country having less than adequate capacity (California is a high-profile example of this) – presents tremendous growth opportunities for Pennsylvania Transformer.

Rahangdale says, “We feel that the U.S. electricity market will grow as the economy turns around. There will be a lot of transformers that will need to be replaced. Plus, the Southeast, the Southwest and the Pacific Coast all have less capacity than they need, and as they build new capacity they will need our products.”

Internal expansion is also in the offing for Pennsylvania Transformer. “We are always looking to increase the wide variety of products we offer,” says Rahangdale. “We have grown every year by a minimum of 20 percent, and we’ll grow like that for at least the next five years.” There’s no better demonstration of power than that.