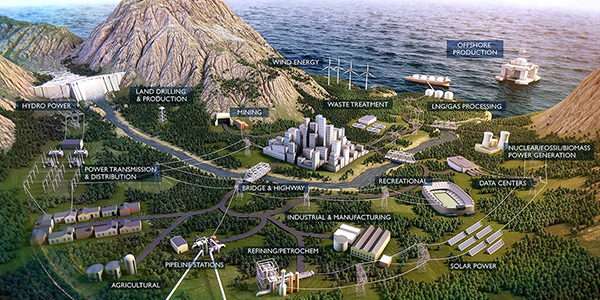 Bill Estes, general manager of CGIT-Westboro Inc. of Westboro, Mass. describes his company as the only dedicated manufacturer of gas insulated bus systems in the entire world. “We are really a niche manufacturer,” he says.

A manufacturer of compressed gas insulated transmission bus systems providing a compact, reliable and economical alternative to conventional cable systems and overhead lines for power transmission, the company is in an excellent position to take advantage of the numerous opportunities around the world as countries such as China and other Asian nations fortify their infrastructures.

As the CGIT system is designed with a totally enclosed dielectric system, which is protected from the environment, only an annual check of the moisture level in the SF6 gas system is required, so the system is virtually trouble-free. Based on GIS technology, the bus systems were designed for economical long-distance power transmission as an alternative to transmission lines, high-voltage cables, or GIS bus designs. “The design uses all-aluminum construction with epoxy insulators for superior reliability and service life, with the epoxy insulators enclosed within the enclosure,” explains Estes.

In power plant design, CGIT-Westboro can combine the output of multiple transformers into a single circuit of a CGIT bus system, thereby reducing the size of the substation and switchgear requirements. Also in these applications the installation of connection circuits above ground promotes access when space is limited underground.

“The economic advantages of the CGIT system include cost-effective installation, operation and maintenance,” says Estes. CGIT installations consist of a number of sections, each terminating in plug/socket joints. Type-HM contact assemblies provide high-current conductor connections, which continue the low-loss electrical paths of the system. Lower losses in the circuits translate to lower operating costs. “Once installed, maintenance of the system can be reduced to annual SF6 gas moisture and pressure checks and mechanical assembly check of bus exteriors and supports,” explains Estes.

Powerful Infrastructures
CGIT-Westboro was founded during the late 1960s as a company known as High Voltage Power Corporation, which was a partnership venture with Massachusetts Institute of Technology. “The partnership was created to develop a high-voltage, high-current transmitting product using SF6 gas to provide a compact design,” Estes says. “The first commercial installation of the product they developed for burying transmission lines underground occurred in 1972 for a power plant in New Jersey.”

Since the early 1970s, what today is known as CGIT-Westboro was acquired by a number of parent companies until 1999, when AZZ Inc. purchased it. “AZZ’s primary marketplace is power generation, so our focus when we became part of AZZ was on the U.S. power generation business, which was really booming at the time with all of the merchant power companies such as Enron,” Estes says. “Our mission now will be to re-focus on our international business, where we’ve had a lot of experience when we were part of ABB.”

The company expects its U.S. business to generate about 60 percent of its revenues, with 40 percent focused on the international market. CGIT-Westboro already has installations in Saudi Arabia, China, Indonesia and Venezuela. “The Venezuelan project we were involved in was a very large hydroelectric power plant in which we supplied gas insulated bus systems rated for 1200 kV – one of the world’s largest hydroelectric power plants which supplies electricity to the Venezuelan grid,” explains Estes.

One of the company’s major focuses now involves developing the Chinese infrastructure, as well as work on a nuclear power plant there. “The Chinese are currently developing their infrastructure and this will be one of our biggest opportunities going forward,” Estes continues. “This is very much like GE has said in that their power generation business is now focused on China and Asia. As GE was one of our biggest clients, we are planning to follow them into China.”

Because the U.S. dollar is relatively weak, CGIT-Westboro is in an excellent position to be the U.S. supplier in these countries developing their power infrastructures, Estes says.

Grid Reliability
One of the biggest roles CGIT-Westboro will play in this country is to participate in upgrading the national electricity grid system to make it more reliable. “We are beginning to see a lot of focus in this country on the condition of the grid – and utilities, transmission companies and the government are sponsoring investments,” says Estes. “We expect to play a big part in these endeavors to update sub-stations, extend existing sub-stations and replace older equipment, particularly in congested areas where we will work to install underground lines.”

“The use of gas insulated switch gear technology to reduce space requirements will be a major factor for our company,” Estes says. Older sub-stations from the 1970s are fraught with reliability problems due to gas leakages and maintenance issues. “We can help in the upgrade of those facilities on a turnkey basis with a full design-install-and-test replacement system.”