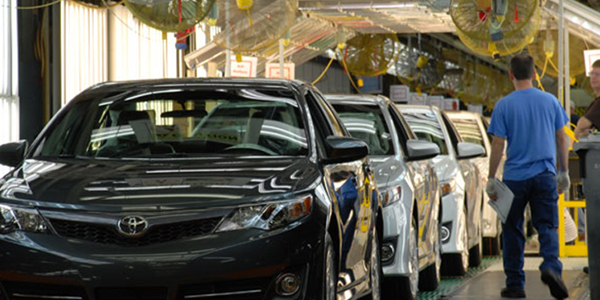 TMMK in Georgetown, Ken., has produced more than five million vehicles in its 15 years of operation. This $5.3 billion facility employs more than 7,000 workers and now has the capacity to build 500,000 vehicles and engines a year.The Georgetown plant builds the Camry and Avalon models and will also start producing the new Solara in the summer. The domestic content of the vehicles made in the plant is 75 percent. The facility has no fewer than 350 suppliers, with 70 in Kentucky alone.

The plant’s economic importance to the area was stressed in a recent academic report, which concluded that TMMK directly or indirectly supports a total of 35,000 jobs in the Kentucky area.

These are all impressive statistics, but Wil James, vice president of manufacturing, puts the success of the 7.5 million square foot plant down to the empowerment of assembly line team members under a concept he calls “Primary Process Operator.”

“This concept identifies individual team members and gives them ownership of the process,” said James. This system empowers team members to take control of the production line, allowing them to stop the assembly line if they ever feel that quality or safety is compromised.

“Our team members are key,” said James. “It would be a sin not to take advantage of the energy they have. When you are able to involve employees to a higher level they get more satisfaction. We use the phrase ‘self realization’ and encourage people to achieve exactly that.

“They feel involved in the daily job that they do. It all improves communication and leads to better morale and better productivity. I believe team members want to be responsible for something. It gives them a personal tie-in. It is important that those who want to excel have the clear opportunity to do so.”

Constant Improvement
Production team members are encouraged to play an active role in quality control, contribute ideas and opinions to the process, and practice kaizen, which means striving for constant improvement. Each is trained to treat the next person on the line as a customer and therefore not to pass on any defective or sub-standard part on to that colleague. If a team member finds a problem, he or she stops the line and fixes the problem before the vehicle is allowed to continue down the line.

Quality control during production makes sure the correct materials and parts are used and fitted with accuracy. There are thousands of inspections during the production process. Team members are responsible for the parts they use. They are inspectors for their own work and that of co-workers.

The Toyota Motor Manufacturing plant at Georgetown – Toyota’s largest in North America and one of the biggest in the world – is a complete vehicle-making process. In one part of the facility, workers begin the manufacturing process with large coils of steel and in another area of the plant employees drive new cars off the assembly line.

The new Solara will soon roll off that assembly line. “We are gearing up for the production of the coupe in early summer and the convertible towards the end of the year,” said James. “It is a totally new and re-modeled Solara, a completely different design. I think people will be excited about it.”

The quality of products made by the Georgetown facility has won the workforce a number of J.D. Power Gold Plant Quality Awards, annual industry awards that pay tribute to the finest vehicle manufacturing plants in North America. As well as its cars, TMMK produces engines and components. Last year, the plant exported products to 15 countries.

Tourist Attraction
Another form of recognition is the growing number of representatives from other manufacturing facilities around the world who visit the Georgetown plant to benchmark its processes. Even the general public is lining up to visit the plant. The tour of the facility has been recognized as a local tourist attraction, so much so that more than 260,000 people have visited it since 1990.

Right now, visitors to the plant will witness workers busy preparing for the production of the new Solara. “Ever year we go through some sort of change,” said James. “We are getting used to this. Every time we go through a major change, it impacts on everybody and there is something new that people have to learn.”

The production process at Georgetown is fascinating. First, there is “stamping.” This happens at the beginning of each vehicle’s 20-hour journey through the production process. Large coils of steel – 95 percent of which is provided by domestic suppliers – are cleaned, straightened and then stamped into more than 200 body components and parts.
Then comes “body weld.” Human welders and at least 700 robotic colleagues carry out more than 4,200 spot welds on every vehicle, forging these steel parts into the body shell that serves as the foundation for the finished vehicle. Then comes 10 hours of painting, when each vehicle shell undergoes a number of stages including priming, sanding, sealing and top-coating to create a paint finish that is durable and corrosion-proof.

In assembly, every body shell is transformed into a fully operational vehicle. Workers install everything from the engine and electrical parts to operating fluids and the insignia. Due to such a hive of activity, assembly is the largest area of production in the Georgetown plant.
After assembly, vehicles are given a thorough quality inspection. Then vehicles are shipped by rail and truck to distributors, dealers and customers across the United States and around the world. Before they are shipped, the quality control at the plant extends to random test drives of new cars. Every day, vehicles are selected and given a test run on a two-mile track near the plant.

In a tough marketplace, TMMK’s cars are selling well. “We are faring pretty well,” said James. “The feeling seems to be that people are moving away from the bigger gas guzzlers.”