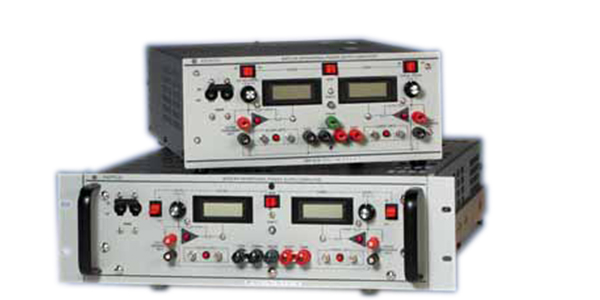 The word “electronic” had not yet been coined in 1946 when four brothers – Jack, Jesse, Max and Ken Kupferberg – founded Kepco, Inc. World War II had just ended, and American industry was making a transition to manufacturing more consumer products and industrial products for American businesses. Three of the brothers had wartime experience with government projects involving electrically powered instruments. Based on that experience, their civilian mission was to educate businesses about the electrical measuring devices and generators they believed would be needed in the post-war years.

As it turned out, the power supply invented by the brothers to run experiments in their teaching display was the item that interested potential customers. Kupferberg Electronic Products Company (Kepco) was launched with that product, Model 103. Now known as The Power Supplier™, Kepco designs and manufactures a broad array of direct-current power supplies and associated electronic equipment. The company’s catalogue offers more than 2,000 items, including laboratory and system products and modular products for the original-equipment-manufacturer market. Kepco’s diverse line includes digital and analog supplies, as well as fixed-output and limited-range adjustable-output supplies. The products’ range of power extends from 3 watts to 3,000 watts with output from 0 to 5,000 volts.

Lasting Power
Fifty-five years after its founding, Kepco is a thriving privately owned company. Day-to-day operations are run by Seth, Mark, Marty and Saul Kupferberg, members of the next generation of the family. Three of the founding members are still active in the business. According to Saul Kupferberg, vice president of sales and marketing, Kepco is best described as a “virtually integrated” company. “We control most aspects of manufacturing, including final assembly and testing. We have our own transformer shop, which distinguishes us from other manufacturers. We even have our own metal shop for covers and brackets.”

Kepco has built a reputation as a technological innovator and provider of reliable electronic products – all designed and built with quality standards that have earned the manufacturer ISO 9001 certification. In meeting the increasingly complex demands of new technologies, the company has pioneered advances that have helped grow the electronics industry. The types of power supplies that have come out of its research-and-development program include: transistorized, linear programmable, automatic crossover, wide-band fast-programmable operational, bipolar operational, digitally programmable and programmable low-noise switches.

From its headquarters in Flushing, N.Y., Kepco currently ships about 100,000 products annually. The company’s 140,000 square-foot facility houses manufacturing, assembly and R&D operations. More than 250 employees work at the site; this includes 135 in manufacturing, 50 in technical operations and 40 in sales and distribution. Kepco products are marketed through a network of domestic and international sales offices and distributors. This network covers the United States and has representatives in Africa, Asia, Australia and New Zealand, Canada, Central America, the Middle East, South America and 16 European countries.

The Power of Quality
Keeping the power on requires the use of electronic equipment that is precise and reliable. Kepco’s quality instrument products are widely used in automatic test equipment, avionics, aerospace and experimental electronics, and high-energy physics applications. The devices are also used in process-control applications required for nuclear power plants, semiconductor manufacturing and CAT scanners.

The modular power supplies built by this technology leader are used extensively in data communications, telecommunications, information technology and industrial electronics. Their applications are as far-ranging as moving surface mail, facilitating voice mail and providing the technology for e-mail. Expertise in providing fault-tolerant, redundant power systems is a Kepco specialty. Fault-tolerant systems have a configuration that ensures the integrity of operation in the event of a single point failure. For power supplies, the requirement is usually to ensure the system despite the loss of any single power module. The usual solution is to provide redundant power modules with sufficient isolation that the failure of any one power module does not cause system failure.

Saul Kupferberg notes that the financial services industry relies on Kepco’s fault-tolerant, redundant systems. “Think of a financial stock exchange. The power must be there for the LED and LCD displays that the analysts and specialists look at. These systems must run on redundant power supplies. Financial information can change in a matter of seconds, and it has got to show up on that display.”

At the BOP
Speaking about product innovations, Kupferberg cites Kepco’s bipolar products. A bipolar-operational-power (BOP) supply swings easily and rapidly from positive to negative voltage and from positive to negative current. He says the company’s current best seller is its bipolar operational amplifier. “This device has two main applications,” says Kupferberg. “First, it’s used for simulating – testing batteries for the automotive and telecommunications industries. Second, BOP products are used to drive magnets for particle acceleration and beam steering in accelerators such as the one the government has at Brookhaven.”

The company’s latest product is a high-powered BOP with 2,000 watts of power – five times the 400 watts of its predecessor, but in the same-size package. Kupferberg explains that the technological innovations in this power supply involve the use of heat: “When the power supply is absorbing energy, the energy is converted to heat, which must be dissipated, usually by a fan. In the new unit, rather than dissipating as heat, the energy is put back on an AC line, so the unit is much more efficient. This also reduces the electric bill, because the meter runs slower. The energy is put back to AC power.”

Reliable, efficient, cost-effective, programmable and interface compatible, Kepco power supplies and equipment are charging the electronic age. NOTE: In case you’re still wondering, phones function during an electrical outage because they are powered by direct current from batteries in the phone company’s central office – and those batteries are good for up to eight hours. And Kepco DC products just may be part of your system.