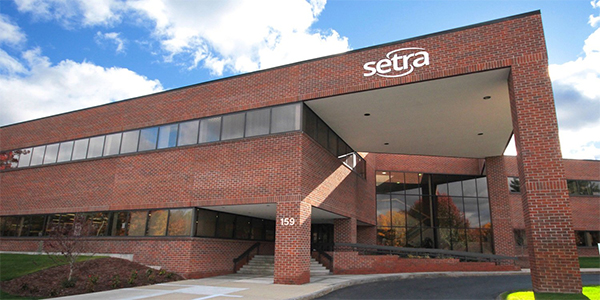 As is the case with many companies, Setra Systems Inc. employs an acronym to identify itself. However, the Boxborough, Mass.-headquartered corporation’s small cup of alphabet soup – S-E-T-R-A – spells out more than just a name conveniently shorthanded. Rather, it emphatically and specifically underscores what it does.

Principled Collaboration
But the fundamental claim to fame is the highly accurate variable capacitance transduction principle, the development of which led to the company’s birth in 1967. The principle was co-developed by Setra co-founders Drs. S.Y. Lee and Y.T. Li, Professors Emeritus of Engineering at MIT, and it comprises the revolutionary force-tensing technology that hallmarks the company’s offerings. “Even today, all of our products’ technologies are based on that principle,” reports Tiago Anes, Setra’s director of sales and marketing. “Essentially, it involves one rigid plate and one moving plate, with a small gap between the two. When pressure is applied to the moving plate, it changes the capacitance between a diaphragm and electrode.”

More specifically, in a typical Setra configuration, a compact housing contains two closely-spaced, parallel, electrically-isolated metallic plates, one of which is essentially a diaphragm capable of slight mechanical flexing under applied pressure, according to the company. The plates are mounted in such a way that a slight flexing of the assembly, caused by a minute change in applied pressure, alters the gap between them. As a result, a variable capacitor is created. The resulting change in capacitance is detected and converted by Setra’s custom Application Specific Integrated Circuit (ASIC) to a proportional high-level analog signal. The created transducer boasts superior performance and reliability, thanks to the configuration’s simple yet strong design, wettable parts made of stainless steel or low-hysteresis ceramic, and a mechanical assembly combined with electronic circuitry.

The versatility that the principle and resulting technology offers fostered company growth. “We’ve been able to venture into a number of different markets and segments, first and foremost the test and measurement industry, working with engine manufacturers, on test bands for measuring various pressures from oil, hydraulics, and fuels. From there, we ventured into the barometric sensing arena,” says Anes. “Also, we’ve become a preferred supplier to many of the HVAC companies, for measuring very low pressure in duct work, for the cooling and heating buildings, for example. We’ve also moved into semiconductor processing applications, where we supply pressure sensors for
tool manufacturers.”

The company also makes test and measurement units and ultra-high purity/semiconductor sensors. The test and measurement units boast high-level output signals, superior stability, and high accuracy and fast dynamic response that make them especially suited for industrial, HVAC, medical, laboratory and aerospace applications. The semiconductor sensors are designed to meet the unique and challenging requirements of the semiconductor industry.

In addition, Setra’s product line includes digital displays, meters and nanometers, and accessories such as power supplies and conduit covers.

The majority of Setra’s products, Anes reports, are manufactured at the company’s Boxborough facility, called Setra Technology Park, which is located on a 23-acre site that includes 200,000 square feet of office and production space. “The manufacturing facility is 110,000 square feet,” he adds.

Setra also has a manufacturing facility in China, a wholly owned subsidiary called Setra Sensing Technology Tianjin. “This sister facility is geared toward servicing overseas customers,” says Anes. “There is some local manufacturing of finished goods and products, but it primarily provides us with a sourcing service. Components are sourced from that location and shipped to Boxborough for assembly in the final products.”

Strong Customer Support
Setra has exceptional assets and heritage: inventive founders, innovative guiding scientific principle, exclusive technologies, a product line with formidable strength and capabilities. And whereas a similarly gifted company might be content to let those differentiators carry it along, Setra, to its credit, is compelled to enhance its advantages (and solidify its market position) by offering the best possible customer service. “As we service so many different industries and markets, one of the keys to being the leader in specific segments is a strong focus on customer support,” says Anes.

This not only involves integral elements such as same-day and next-day delivery (which Setra guarantees), or ANSI-ASQ ISO 9001:2000 certification (which requires Setra to maintain a documented quality system to ensure customer satisfaction through controlled design, manufacturing, and employee training programs); it also includes customization.
“We strive to understand all of our customers’ individual requirements. To that end, we’ve established a VOC module, which means `voice of the customer,’ and is a
very interactive process that helps us better understand their needs. Once we understand those needs, we’ll work with our engineering staff to develop a custom product that not
only caters to specific requirements, but meets customers’ performance and technical expectations as well as their pricing requirements,” says Anes.

For Setra, being interactive means that the company works with clients during the development stages of their products, or in the re-design of existing products. “We have a number of different processes that involve taking an existing product and re-spinning it to fit a customer’s new requirements, whether these involve the pressure fitting, electrical connection, the outputs, or ranges,” says Anes. “We’ll even go as far as making a completely different product from a form, fit and function standpoint.”

Anes indicates that Setra’s approach to customer service ramped up five years ago, when the company was acquired by Gems Sensors of Plainville, Conn., a wholly-owned subsidiary of the Danaher Corporation that designs and builds liquid level, flow and pressure sensors and controls.ÿ “Our customer focused approach is a by-product of that acquisition,” he comments. But the overall impact of the acquisition was far ranging. “It made us part of a multi-billion dollar company, and it helped us become more of an international enterprise,” says Anes. “Now, we look beyond our four walls, whether that involves partnering with other companies for product development or looking at a global product development view as opposed to a domestic view.”

In the past several years, Setra has been experiencing 10 to 12 percent annual growth, and it has steadily strengthened its market positions. “We’ve become strong in each area that we focus on. In particular, if you look at the HVAC segment, we’re now the leader for low-pressure measurement and static pressure, air velocity and differential pressure applications,” reports Anes. “In the semi-conductor industry, we’re in the top two when it comes to pressure transducer applications.”

Setra System has come a long way since Drs. Lee and Li developed the variable capacitance transduction principle in 1967. In the ensuing 40 years, the company has maintained and sustained itself by remaining true to its stated mission: to exceed customer expectations.