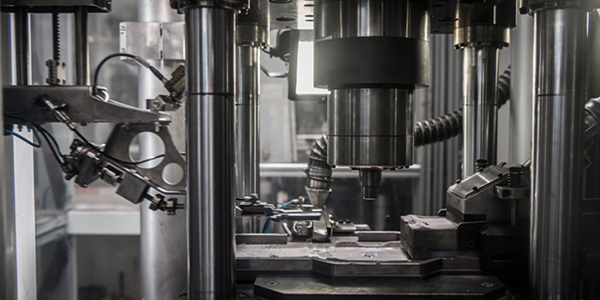 No one will ever mistake Burgess-Norton Manufacturing Company for the proverbial “old dog” overwhelmed by the challenge of learning a “new trick.” Now 103 years young, the Geneva, Ill.-based company periodically revitalizes itself by developing advanced products through technological innovation.

Burgess-Norton’s long, robust history is milestoned by developments that amount to quantum leaps: It progressed from basic tools and simple hardware, to piston pins and, more recently, into the realm of powder metal and soft magnetic composites.

Along the way, the company transformed itself into a major designer and producer of precision metal components, with a global reputation characterized by superior quality.

Founded in 1903 in Geneva, Ill., by Frank A. Burgess and Henry W. Norton, the company started out by making basic tools, such as hatchets, and small hardware components, such as window hinges and screen door catches. After it entered the piston-pin arena, it subsequently became the largest supplier in the world for internal combustion engines and compressor applications, with its pins present in automobiles all across America.

The company became a leader by building on the basic concept of the piston pin. Essentially, the device connects the piston to the connecting rod within an internal combustion engine, informs Todd Olsen, product manager of Burgess-Norton’s powder metal division. But the company advanced the technology by developing pins designed to improve fuel mileage and engine efficiency. “We did it by investigating and implementing ways to take weight out of the piston which, in turn, takes weight out of the reciprocating mass in an internal combustion engine,” Olsen explains.

Now the division not only manufactures piston pins; it produces shafts, rocker arms, and other complex parts for gasoline and diesel engines. Customers include original equipment manufacturers of autos, light trucks, heavy duty trucks, and commercial vehicles, as well as most first-tier suppliers of pistons. It has a “big name” client list that includes John Deere, Caterpillar, GM, Ford, Chrysler, Honda, Nissan, Volkswagen, Peugeot, Citroen, Renault, and Toyota, among many others. Besides the Geneva facility, Burgess-Norton manufactures product at its plant in Claremore, Okla., which it built in 1976, as well as at facilities in Saltillo, Mexico and Vieux-Charmont, France. In 2004, Burgess-Norton bought Salvadori Spinotti SRL of None, Italy, one of the world’s leading suppliers of piston pins.

Today, Burgess-Norton’s powder metal division serves a more diverse range of customers than the piston pin division, informs Olsen. “We do business with major automotive tier one and tier two players, diesel engine manufacturers, leading manufacturers of agricultural and off-road and construction equipment, HVAC equipment manufacturers, as well as manufacturers of recreational vehicles and people in the hydraulics industry,” he says.

The division works closely with these customers to develop new designs and to re-engineer parts from other technologies such as castings, forgings, or wrought materials. “We provide engineered solutions and identify more complex components, and we use our engineering resources to take components made from traditional materials and convert them into a powder metal component, thus increasing their value to the customers,” says Olsen.

The company began its powder metal activities at its Geneva facility. In 1999, it acquired a second facility in Beaver Dam, Wis., when its parent company, the Chicago-based Amsted Industries, bought Advance Products Corporation (APC), a leading producer of powder metal parts, particularly powder metal gears and sprockets. By combining the two operations, Burgess-Norton was able to increase its own array of powder metal products and solutions.

“Soft magnetic composites are a more technology-driven product offering that we are just beginning to roll out,” says Ted Baker, the division’s director of soft magnetics. “The technology leans heavily on the powder metal process, and it has been spurred by powder metal developments that allow us to replace steel laminations in electric motors.”

Soft magnetic composites are insulation-coated, ferrous powder metal materials molded into a net- or near net-shape component. Burgess-Norton uses a high-pressure compaction process to mold a component into a complex shape capable of producing three-dimensional magnetic flux patterns. The process, a Burgess-Norton technological specialty, compacts the components to densities that optimize ferromagnetic properties. Compaction is followed by a finely tuned heat treatment process. The end result is high-performance components for ferromagnetic applications.

“Electric motors have been made for stators and rotors for about 125 years,” relates Baker. “In the past few years, we’ve been coming along with the very material-efficient technology that works electromagnetically in both two and three dimensions. It allows for performance improvements while reducing weight and size of the electromagnetic circuit, whether it’s a motor, an actuator, or what have you.”

Some of the projects the division is working on involves hybrid engines. “Soft magnetic composites are very useful in hybrid drive systems, and we’re starting to see a lot of project work in that area,” says Baker.

Heading into the future, Burgess-Norton, which has regularly achieved annual growth rates between 5 to 7 percent, wants to increase business by employing a niche-market strategy. “We intend to establish ourselves as the supplier of choice for the leading players in all of the markets that we serve by offering them engineered solutions,” says Olsen. “We’re going after specific, targeted customers, offering them a higher technical expertise.” The strategy should play out perfectly, as Burgess-Norton has excelled both in technical innovation and customer satisfaction. Its own internal pistons are pumping with the power and precision of a finely tuned engine. Not bad for a 103-year-old vehicle.