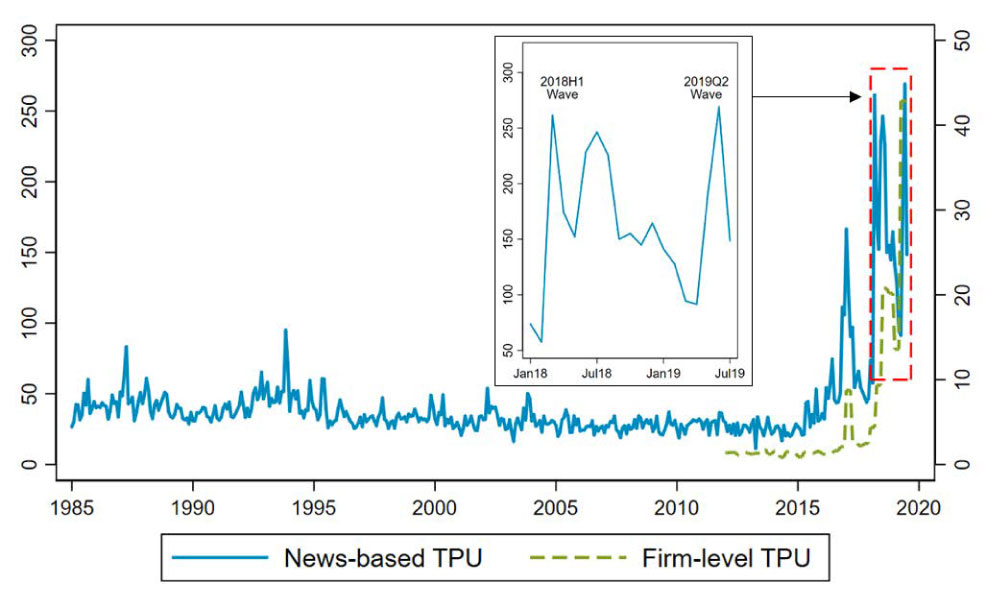 Can a national economy be talked into recession? And is this a danger for the American economy today? As known by anyone with even basic knowledge about economics, because psychology (and especially optimism and pessimism) so crucial determines business and consumer decisions, the answer to the first question unmistakably is “Yes,” at least in theory.

There’s a lively debate over whether that’s now a danger – with Donald Trump among others charging that his political and Mainstream Media opponents’ alleged determination to defeat him in the upcoming presidential election has turned them into prophets of doom – but obviously the winner can’t be determined until an actual downturn has begun.

But two notable clusters of evidence have just emerged lending at least some credence to the latter proposition. The first comes from today’s news coverage of a key measure of confidence in the economy – the monthly Optimism Index issued by the National Federation of Independent Business (NFIB), the nation’s leading small business organization.

In quintessential examples of unjustifiably downbeat reporting, the survey’s results were widely portrayed as a sign that the national economic sky is getting close to falling. “U.S. Small-Business Optimism Drops to Lowest in Five Months,” blared a Bloomberg.com headline. “Trump’s trade war is triggering a ‘sharp slowdown’ among American small businesses, warned Business Insider pointedly. “Small Business Optimism Index for August 2019 falls 1.6 points,” specified a brief YahooFinance.com item, which also blamed the Trump trade policies (as did the Bloomberg article).

But if you think about it, two of these headlines themselves strengthen allegations of alarmism. After all, five months isn’t an especially long time period. And 1.6 percentage points isn’t exactly a nosedive.

More important were the points buried in these stories. For example, it wasn’t until the fifth paragraph (of eight) that Bloomberg readers were told that “Even with the decline [from a prior reading of 104.7], the NFIB gauge remains elevated by historical standards, though it’s below the average level since Donald Trump was elected president in 2016.”

And get a load of this statement from the NFIB’s leader, which appeared in a gloomily headlined Dow Jones piece:

“‘In spite of the success we continue to see on Main Street, the manic predictions of recession are having a psychological effect and creating uncertainty for small business owners throughout the country,’” NFIB Chief Executive Juanita Duggan said in prepared remarks. ‘Small business owners continue to invest, grow, and hire at historically high levels, and we see no indication of a coming recession.’”

Further evidence of media fear-mongering – also tightly linked to Mr. Trump’s trade wars – has appeared in a new study from the Federal Reserve. In a September 4 report titled “Does Trade Policy Uncertainty Affect Global Economic Activity?” a team of Fed staff economists seek to document the widespread (and entirely reasonable) belief that “Higher uncertainty could lead firms to delay their investment and reduce their hiring, lower consumer confidence and spending, and ultimately curtail economic activity around the world” – including in the United States.

To make their point, they created and use two measures of uncertainty. The first “is based on searches of newspaper articles that discuss trade policy uncertainty.” The publications comprising this database were “Boston Globe, Chicago Tribune, Guardian, Los Angeles Times, New York Times, Wall Street Journal, and Washington Post.” The second was constructed “in an analogous way from automated text searches of the quarterly earnings call transcripts of U.S.-listed corporations.”

Anyone with even a rudimentary knowledge of trade policy and its recent history might well immediately recognize one serious potential problem with the business-based uncertainty gauge: Public companies have been among the strongest and most influential supporters of pre-Trump trade policies, and have understandably been among the loudest critics – since the President’s pushback threatens established business models that have greatly boosted profits via sales to the high-wage U.S. market from offshored or other factories located in super low-cost countries like China and Mexico, and through the use of subsidized and artificially cheap inputs from numerous mercantile foreign economies.

But much more interesting and revealing: However strongly these companies logically would be expected in their public statements to harp repeatedly on the reality and potential of trade war-related problems (which can be considerably hyped, as I’ve demonstrated), the newspapers in the Fed report’s gauge cited such actual and possible difficulties much more – as the chart below shows. That’s why the solid line in the chart, showing the media’s mentions of uncertainty, has consistently been higher than the businesses’ mentions until very recently. (I know it’s a little hard to eyeball, but make the effort.)

Do these findings mean that the economy has no serious problems, that the odds of a recession in the foreseeable future are negligible, and that Mr. Trump’s trade policy decisions may not exact significant economic costs? Of course not. They don’t even prove the charge that the media is seeking to oust the President by talking the economy down. But do they indicate that a “bad news sells” bias is pervading media coverage of the economy (and the trade war) at an especially crucial stage of the business cycle – and the political cycle? The above evidence makes this allegation look awfully credible.