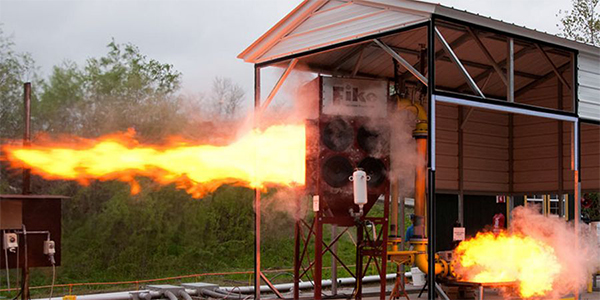 The disastrous explosion in the Sago Mine in West Virginia has put the need for explosion protection in the headlines. The dangers can be clear and present in a gaseous mining operation, but did you know that dust can cause explosions in nearly any industrial setting? If you can write your name in the dust at the factory, then you’re at risk for an explosion that can be sparked by just a static charge. “There’s dust in a lot of processes – be these food, pulverizing, manufacturing – all kinds of applications,” says Max Jewell, president. “One of the key things we try to do is test that dust, design the system, and show the customer why it is a real hazard.”

Fire and explosion protection and pressure relief solutions have been on the front page at Fike Corporation since it was founded in 1945.

It all began with rupture disc technology to produce reliableand accurate pressure activation devices for the oil and petrochemical industry. Today, the need for fire and explosion detection, prevention and suppression is greater than ever in the U.S. and worldwide. Fike Corporation’s systems can be found in applications including aerospace (Neil Armstrong had a Fike rupture disc as part of his moonwalk backpack), cement, chemical, clean rooms, control rooms, data storage, grain, laboratories, machinery, marine/shipbuilding, pharmaceuticals, and telecom. Each of these common settings translates to an industry and market segment for the growing international company based in Blue Springs, Mo. In addition to the multi-uses of its asset protection technologies, Fike Corporation has cultivated a global marketplace incorporating manufacturing, assembly, distribution, sales, technical and/or service centers in 12 countries on four continents. “You have to be close to your customer in order to really tailor your products and your support and applications to that local market,” Jewell explains, noting the strategy behind the company’s expansion. “Things are different in China, South America, and Europe, with all different levels of approvals or commitment to safety. You’ve got to be where the customer is, and since customers are global, you also need to be if you want to support them.”

The goals of the company are to promote worker, facility and process safety for its customers. In some cases, the motivation is due to regulatory demands, especially in Europe. “The EU has become pretty aggressive in requiring regulatory approvals for any system that has explosive potential,” Jewell reports on the standards known as ATEX. “In other parts of the world insurance companies are demanding fire and explosion systems to protect their investment.”

Either way, it makes good business sense to protect your personnel and assets and to minimize costly business interruptions with the use of detection, alarms, and suppression systems. For example, in commercial fire protection, Fike Corporation is pressed into service to protect anything from high-tech servers or data storage facilities to paper archives and museums. “We’re called in wherever there are people-occupied, high value assets,” Jewell says.

Fight Fire With Fike
Fire detection, protection and suppression remain the company’s biggest segment, followed by pressure relief systems, then explosion protection. “One of the reasons we got into the fire protection business is that years ago we developed a valve that uses a rupture disc so there’s a synergy there,” Jewell explains. “With our specialized valve we are able to flow more (fire suppressant chemicals) so we can pipe it farther and also disperse more agent. The more efficient flowing capacity saves customers’ money.”

An example of meeting international market needs is Fike Corporation’s development of an inert gas fire suppression system using sophisticated valve technology. In addition to being safe for people and equipment, the inert gas system is environmentally friendly, a priority in the European market. “Europeans are greener than much of the rest of the world and we needed the inert gas system to be developed, requiring a pretty sophisticated valve.”

The company has also been innovative in developing and upgrading electronic controls and alarms for its revolutionary fire safety and protection systems. A new product in the U.S. market is CyberCat™254, a single loop fire alarm and control panel system designed for use in smaller applications that brings top-of-the-line protection to companies on a budget. The expandable system includes digital, peer-to-peer bi-directional communications and remote sensors for split-second alarm notification. The network-intelligent offering alerts alarms and can trigger HVAC, elevators, dampers, doors, security, CCTV, PA evacuation announcements, and other alarms and interventions.

The CyberCat system is just one performer in Fike Corporation’s impressive lineup of fire detectors/alarms, protection and suppression products. From simple, conventional fire panels to addressable fire alarms to voice fire evacuation systems, Fike Corporation has reliable fire alarm systems to fit customers’ specific requirements. The company also supplies advanced aspiration detection and air monitoring equipment. On the fire suppression side, Fike Corporation offers a complete line of fire protection systems. Its technicians analyze customers’ operations to determine the correct fire suppression detection and/or fire alarm system. Specialized environments like telecommunications facilities, clean rooms, data processing centers, archives, museums, food and drug manufacturing facilities, all require special agents to protect people, equipment and assets.
With more than 60 years’ experience, the company has been at the center of many asset protection innovations, particularly in fire protection. In the old days, firefighters threw water at the problem, resulting in hazards for personnel and property. In the 1970s, a people-safe gas, halon, was used but eventually banned as an environmentally hazardous CFC. “When halon was banned that had a huge impact on fire protection systems so we worked with chemical companies and we were the first to use a halon replacement gas in our systems,” Jewell reflects on the 1994 innovation. The agent is Dupont’s HFC-227ea. The resulting product, the Fike FE227™ Clean Agent Fire Suppression System, provides an economical, environmentally acceptable solution for fire protection. Another innovation introduced in 2002 by Fike is the ECARO-25 Clean Agent fire suppression systems. These systems utilize Dupont’s FE-25TM which requires 20 percent less agent for the same applications. It can also replace existing halon systems without changing the piping networks in the facility. These systems extinguish a fire quickly by discharging in 10 seconds or less. Since the agent discharges as a gas, it leaves behind no residue and doesn’t require costly clean up, unlike sprinklers or other systems. Add to it Fike Corporation’s patented rupture disc valve design and the system has further speed, flexibility and effectiveness to minimize damage and business interruption for high-tech applications like telecommunications, data processing, switch gear rooms, military and medical applications.

It Started With A Rupture Disc
Fire protection was a natural extension of the company’s original business: rupture discs. In fact, Fike Corporation began when Lester Fike, Sr. began tinkering in his small machine shop in Independence, Mo. Fike had worked for a company that made rupture discs but when the patent expired, he started making them on his own. The simple components are metal membranes that rupture to relieve pressure under controlled conditions to prevent injuries, equipment damage and downtime. It’s easy to picture rupture discs protecting pipes, valves and vessels, but they can be used in limitless other applications. Fike Corporation, still owned by the family, continues to specialize in rupture discs, bursting discs, and the isolation of pressure relief valves with products for many applications to improve process safety and protect equipment.

The small company grew and moved to new headquarters, eventually expanding nationwide and worldwide. Today it has manufacturing facilities and headquarters in Blue Springs, Mo. including about 10 acres and 200,000 square feet, a testing
facility, and an additional large-scale testing site outside of town. In Herentals, Belgium, the company recently doubled its factory space to about 42,000 square feet. The newest facility is a 12,000-square-foot plant in Burlington, Ontario, Canada. Two more production locations are in New Jersey. Serving South America is a manufacturing facility located in Jundiai near Sao Paulo, Brazil. Another in Guildford, Surrey, U.K. is dedicated to the growing European market. The company employs 700, with half in the U.S.“The EP [explosion protection] business is exciting and growing; as Europeans drive the market, it will continue to expand,” Jewell predicts.

This specialized area of increased focus lately is concerned not only with mitigating the damage from an explosion but with detection and even prevention through passive and active systems.

A passive explosion detection system is a device akin to a large rupture disc engineered to open under pressure and relieve the explosion activity, such as a dust explosion in a silo. Active systems are more sophisticated and include sensors, a control panel, and containers with suppressive agents. “It senses the explosion, sends that signal back to the control panel, which releases the agent into the environment that needs to be suppressed and this happens in a milliseconds,” Jewell says. “It’s a magical system that senses an explosion before it happens and suppresses it using a chemical, many times simply sodium bicarbonate. We are really the only company in the world that has the full breadth of explosion protection. We go from the passive systems all the way to the active systems and we have a large facility for doing testing,” he says. “Some of our competitors do one or the other but not both.”

Patents for the company in this area include the Fike (www.fike.com/gca_products.html) GCA (Gas Cartridge Actuator), used to activate Fike’s explosion suppression and explosion isolation systems. The designs boast the fastest, most reliable response time on the market. The GCA also lowers maintenance costs and plant downtime because of its 10-year service life. (Competitors’ conventional detonators recommend a replacement every 12 months.) In addition, a Fike Explosion Isolation system controls any ensuing fire and reduces the propagation of the flame front to other process equipment. Because explosion isolation does not vent flame or other material, it is the solution of choice when toxic materials are being handled.

These kinds of thoughtful, market-leading technologies have led to 15 percent growth for the company over the past two years. While some acquisitions have been made, principally distributorships, the R&D-driven Fike Corporation continues to build on its niche in process safety. “We’re expanding by adjusting our products to specific markets in the U.S. and around the world,” Jewell says.