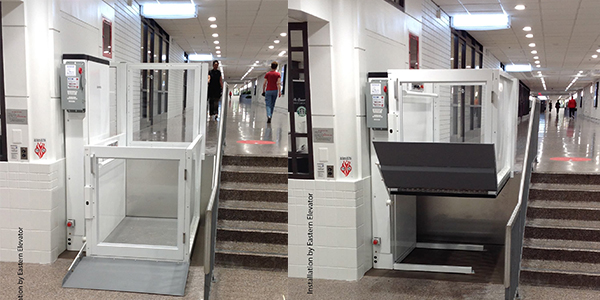 In North America, the baby boom generation born in the 1940s and 1950s is finally booming into old age. And a Quebec-based company called Savaria Concord Lifts is booming right along with them.

From its humble beginnings in the late 1970s, Savaria Concord Lifts has grown into the second-largest accessibility company on the continent, manufacturing an ever-growing line
of stair lifts and elevators for homes and small businesses. While the company has been greatly aided by the growing awareness of handicapped disability issues, in recent years much of Savaria Concord Lifts’ gains have been fueled by the aging population and the construction of new homes and condos to house these boomers.

“There are some 800,000 people who turn 65 every month,” noted Robert Berthiaume, the company’s vice president for research and development. “They don’t all need us now, but they will eventually. We‘re in a good industry.”

That trend is reflected in some of the new housing that is aimed at affluent but aging baby boomers across North America. Berthiaume noted that many new condos for older adults are under construction in urban areas where land prices are at a premium, meaning that many units are two, three, even four stories, and as a result, are installing elevators.

Going upscale
“They’re building more of these condos as upscale units,” he explained, noting that buyers in their 50s and 60s realize they may need an elevator in the future even if they are in perfect health today. “They forecast that they will need one in five or 10 years.”

That is why a major focus at Savaria Concord Lifts over the past couple of years has been building elevators that are less bulky and require fewer external features, in order to better fit into new and existing units. Savaria Concord Lifts now markets the Telecab, a residential two-stop elevator that aims to maximize living space and keeps construction to a minimum by eliminating the need for a hoistway.

“It goes through the floor so you don’t require extensive modification to the home; you just need the hatch cover,” Berthiaume said.

Products like these have fueled a sharp increase in earnings and revenues for Savaria Concord Lifts, which is publicly traded on the Toronto Stock Exchange. In the first quarter of 2006, revenues rose by a whopping 137 percent, in part because of two major acquisitions but also because of rising sales. For the year, the company expects to bring in approximately $65 million in sales.

That’s a pretty sharp gain for a company that had just seven employees when it was started in 1979 in Laval, Quebec, a suburb of Montreal. Much of the firm’s rapid growth has taken place since 1989, which was when the current CEO, Marcel Bourassa, arrived to take over the company. Today, Savaria Concord Lifts has more than 400 employees, most at its facilities in Laval and outside of Toronto.

Key acquisitions
In the early years, the main thrust of Savaria Concord Lifts was on the platform lift business and on stair lifts. But since the start of this decade, there has been an increasing emphasis on elevators, culminating with the purchase in 2005 of Ontario-based Concord Elevators, a leading designer and manufacturer of elevators and vertical platforms. In the same year, Savaria Concord Lifts also acquired Van-Action Inc., a company primarily offering lowered-floor mini-vans, ideal vehicles for the transportation of people in wheelchairs.

However, a great deal of Savaria Concord Lifts’ growth has been organic, fueled by the steep rise in customer demand. Some of that came during the 1990s when the United States passed the Americans with Disabilities Act, which in turn required businesses and public facilities to spend billions on new equipment to make their buildings accessible to the handicapped. Although there is no equivalent to the ADA in Canada, Berthiaume noted that there is considerable spending both on the governmental and private levels to increase accessibility there.

“The ADA was very good for us,” Berthiaume said. “In the last 10 years, the industry has been growing in all aspects, with more and more stair lifts.” In fact, Savaria Concord Lifts has worked to pioneer stair lifts that function on curved staircases of the type increasingly found in newer built homes.

In part as a result of the ADA law, Berthiaume said that sales in the United States currently account for roughly 65 percent of Savaria Concord Lifts’ revenue, with much of the rest of its business at home in Canada. The firm sells its products through a broad and growing network of distributors and retailers – more than 600 at the last count – as well as direct retail outlets located in Montreal. As a sign of the growing potential for the international market, Savaria Concord Lifts now has an exclusive dealer and partnership in Dubai in the United Arab Emirates, and also distributes some product in Europe, South America and Australia.

Berthiaume said that some of the most fertile areas for the company are where the greatest construction of the housing for older adults is taking place within the United States. “The elevator industry is very good right now, and a lot of elevators are being sold at multi-unit projects in California and Florida and New York,” he said.

Also offered are more traditional luxury residential elevators such as the Infinity®, Ultimo, Prolift Voyager and the Orion. Each offers smooth cable hydraulic drive plus a wide range of sizes and capacities to suit any home. Further, these elevator cabs are available in many design configurations and a multitude of melamine or wood finishes such as oak, maple and cherry – part of an increasing effort to make such devices more stylish.

Easy to use and repair
But elevators are not the only product area in which Savaria Concord Lifts is a leading technology innovator. For example, the company recently began manufacturing and marketing the Commander Door Operator, a battery controlled system that mounts on a door and allows a handicapped individual to open and close it with the press of button. In addition, many customers have found that a Step-Saver stair lift, which costs on the order of $3,600 to purchase and install, can spare the huge expense and emotional toll for an older resident of having to move from their longtime home.

Many of Savaria Concord Lifts’ devices are battery operated in order to assure that they will still operate in the event of a power failure. Indeed, Berthiaume said he believes that the ultimate key to the success of Savaria Concord Lifts is the simplicity of its products and its ease for consumers to use and to repair. Many devices use a relay logic control as opposed to a complex electronic circuit board, which in turn makes them easier to repair more quickly in the event of an emergency.

“We’ve always made simple products – nothing fancy about them,” Berthiaume said. That may be true, but those simple products are helping an aging society to better navigate a more complicated world.