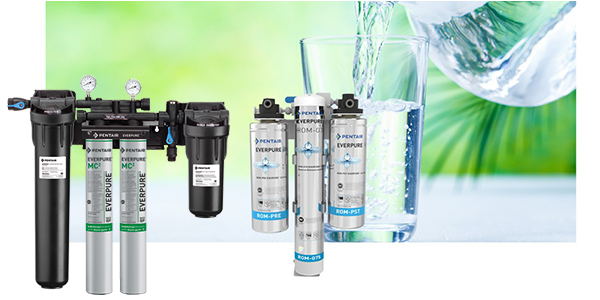 What do President Clinton, a thirsty teenage 7-Eleven customer and a middle-aged coffee fanatic all have in common? Whether they realize it or not, they’ve all had the pleasure of drinking a beverage made with the purest filtered water available in the world.

And, odds are you have ever had a Slurpee from 7-Eleven, a mocha-latte from Starbucks or even a glass of water during a plane flight, you have sampled this water, filtered by an Everpure system.

Since 1933, Everpure has been providing quality drinking water filtration systems to households, businesses and industries around the world.

Companies such as McDonald’s, Burger King, Coca-Cola, Bertuccis and Outback Steakhouse use Everpure systems to purify their water. Every surface ship in the US Navy relies on Everpure systems to provide better-tasting, healthier water. And of course, the Navy’s Commander-in-Chief also has his coffee made with the purest water while traveling on Air Force One.

“Companies have really begun to look at the quality of the water they use to mix their beverages and to make ice,” said Richard Suda, vice president and general manager of Everpure, Inc., a division of United States Filter Corp. (which also owns Culligan). “A lot of people don’t realize that fountain drinks are 83 percent water. Coffee is more than 99 percent water. The only way to ensure the consistency of the product is to control the quality of the water.” That is why these companies spend millions on Everpure products.

“They want to make sure the quality of the water is the same all over the country,” added Suda.

CB Oliver, a mining engineer from Nevada, founded Everpure in 1933. Back in the early 1900s, Oliver had an idea that proved to be one of the most innovative ideas in the history of water purification.

He took a popular mining filtration product, scaled it down and developed what is now Everpure’s benchmark product – a precoat filtration system.

But instead of seeking a patent for the product, Oliver decided to keep the product’s components a secret. This was one of the smartest business moves he could have made.
This allowed Everpure to retain its secret. Patents are only good for so long. If Oliver had patented the filter, he would have lost the patent in the 1950s, forcing him to reveal the components of the unique filter.

Because he did not seek a patent, the product has yet to be duplicated.”We are the only precoat manufacturer in the world,” said Suda.

Since its first product went to market in 1933, Everpure has found a way to become the leader in the production of water filtration systems. Everpure is the leading provider of commercial, indus-trial, municipal and residential water and wastewater products.

But it is the point-of-use drinking water filtration system that has made Everpure a leader in the industry.

Currently, Everpure supplies point-of-use systems to about 60 percent of the food service industry. The company supplies the top 15 to 20 fast-food restaurant chains and the top 15 or so convenience store chains with point- of-service water filtration systems. And, recently, Everpure and its parent company, US Filter, announced an alliance with the Coca-Cola Com-pany to provide Coca-Cola Fountain USA’s customers with total quality water solutions. “We have built a great reputation over the past 25 or 30 years with these companies,” Suda said “We are a leader in the industry.”

Everpure has kept its market share by allowing manufacturers and industries to filter water at a cheaper cost – by only filtering water used for consumption.

According to Suda, only about two percent of water that goes into a building is used for consumption. The rest of the water is used for cleaning, waste and similar jobs.
Why spend money to treat water that is going to wash down the drain?

Everpure’s point-of-service filtration products clean the water minutes before it is consumed.

“This water is dispensed minutes before it is used,” Suda explained. “It goes from the filter directly into the consumer’s cup.”

The U.S. Navy has signed a contract with the company to provide all surface ships with Everpure filtration systems. Offshore drilling platforms also use Everpure filters to make sure the water is safe for their crews.

In addition, Everpure markets its residential products through appliance stores and kitchen equipment dealers. Everpure products are also installed in many recreational vehicles. Homeowners and RV owners get the same high-quality water filtration products as do Everpure commercial customers.

“You may not know the name,” Suda said, “but from the consumer’s perspective, there are very few people on a week-to-week basis who have not used water filtered through an Everpure system.”

With the point-of-use market pretty much cornered, Everpure is now looking to move into uncharted territories. The company is working on the development of products that will remove bacteria from water supplies.

This, according to Suda, could even further catapult Everpure to the forefront of the water filtration industry.

These systems, he ex-plained, could be used in Second and third-world countries to ensure safe water for tourists and for companies like McDonald’s, who are enjoying worldwide expansion.

“When you go into a McDonald’s you are expecting certain conditions to be the same all over,” said Suda. “It is our responsibility to insure and ensure that the quality and consistency is worldwide.”

Which is important in today’s litigious society.

State of the Art Manufacturing

Everpure is not only helping its customer base to expand, it is ensuring its growth as a leader in developing cost-effective-state-of the-art filtration products.

“We are completely computerized,” Suda said explaining that the company uses the latest in Computer Aided Design to assist with the manufacturing process.

By using Auto CAD, Auto Desk View and Pro-Engineer and PT Modeler, Everpure is able to design 3-dimenssional replicas of its products that can be put through rigorous design tests.

According to Suda, these programs actually pre-determine if there are any weak links in the design of Everpure filtration systems. If any flaws are found, they are corrected immediately, before going into production.

“We can go from design to actual manufacturing in about one-fifth of the time it took through the traditional route just four or five years ago,” Suda said.

Which is another way Everpure can keep its costs reasonable.

“This accelerates taking the project from concept to fruition,” Suda said. “It gives us a significant competitive advantage.”

In addition to expanding its product line, Everpure is also planning to expand its manufacturing facilities in the near future. According to Suda, Everpure will be looking to add a manufacturing site in the US. This would be in addition to the Westmont, Il., facility. There will probably be an expansion of its sites in Belgium and Japan as well.

This expansion of its market and its facilities will most likely make the name Everpure recognized in every household in the US. Which – when you consider that almost everyone in the country has consumed something this week filtered by an Everpure product – does make sense.