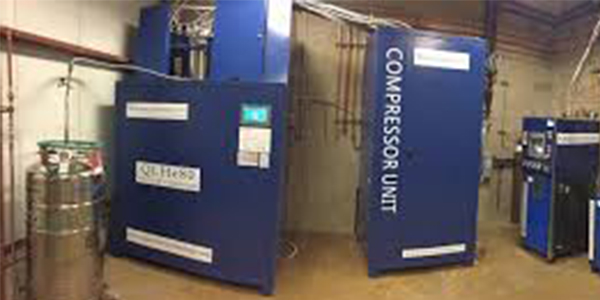 NASA trusts them. So does Suzuki, Hyundai, Toyota, and General Motors. Catering primarily to the automobile industry is just one of the exciting things Quantum is currently working on its fuel cell-enabling technology. Critical to the mass commercializing of fuel cell vehicles is hydrogen storage. “We have the solutions right now to how the fuel is stored on board the vehicle and are supplying these solutions to our customers today,” said Alan Niedzwiecki, president and CEO of Quantum.

Quantum has major contracts with the premier auto OEMs with the intent of going into full production. “GM wants to be the first to put a million fuel cell vehicles on the road.” Toyota and Honda, he explained, launched market-ready fuel cell vehicles on Dec 2, 2002. “We’re excited to be part of this emerging market,” Niedzwiecki said.

All Fueled Up
But that’s not all that is happening at Quantum, a world class resource for advanced fuel storage, fuel metering, electronic control systems and system integration for manufacturers of fuel cell engines and internal combustion engines. A tier-one supplier to OEMs for engineered fuel delivery and fuel storage systems, Quantum’s advanced fuel system technologies enable economical operation using clean-burning fuels, such as hydrogen, natural gas and propane.

History of Advances
Headquartered in Irvine, a suburb of Orange County, Calif., Quantum employs more than 90 scientists, engineers, and other professionals focusing on the development of advanced gaseous fuel technologies for fuel cell engines and internal combustion engine applications. The company’s Lake Forest, Calif., advanced vehicle concept center employs more than 50 engineers and other professionals working on systems integration, validation and certification for concept and production vehicles. Its third facility, opened in 2000, assists Quantum’s OEM customers in the Detroit area. Program staff ensures that the voice of the customer is clear to engineers and designers throughout each step of the program.

Quantum’s former parent, IMPCO, was established 42 years ago in Santa Fe Springs, Calif. During the energy crisis of the 1970s, IMPCO became a preeminent supplier of aftermarket conversions in North America. In the 1980s, IMPCO dominated the forklift industry by converting from gasoline to propane systems.

A pivotal event happened in 1993 when IMPCO was awarded the General Motors’ contract to develop fuel systems for alternative fuel vehicles. Quantum has sold more than 15,000 of these alternative fuel systems for vehicles running on natural gas or hydrogen. By 1999, Quantum had announced a breakthrough in new all-composite ultra lightweight, high capacity low-cost gaseous fuel storage technologies. The year 2000 was also an exciting year for the company. Quantum became a subsidiary of IMPCO, launched a variety of OEM compatible electronic control products, formed a strategic alliance with Thiokol Propulsion, integrated a hydrogen fuel storage system for Hyundai’s Santa Fe fuel cell vehicle, and was awarded multiple contacts to develop high performance hydrogen storage systems for the U.S. Department of Energy.

Modern Milestones
“The key is we currently produce the lightest fuel tanks. An ordinary tank would measure 13 inches by 35 inches long and would weigh 150 pounds. The same size tank made by Quantum is just 39 pounds. And we integrate the fuel systems with production in mind, taking into account the harsh environments in which they will operate,” said Niedzwiecki. “No single competitor does all that Quantum does. That’s why we attract the major automobile manufacturers of the world.”

It seems Quantum is used to firsts. The company was the first to develop a 10,000psi-hydrogen tank and achieved regulatory approval on it about a year ago – an accomplishment no one had been able to achieve. It also is working with the U.S. Department of Energy to develop the technology and has government approval in Europe and Japan. “We have some of the top engineers in the world working on hydrogen storage technology. Very few companies in the world have this technology,” added Niedzwiecki. “We’ve advanced fuel storage with the help of the U.S. Department of Energy and we’re working with them to develop the roadmap for the hydrogen economy.”

Niedzwiecki assured that there are tremendous capabilities at Quantum. “When visitors see the resources and technology we have here, they’re impressed. We have invested over $1 million here. The result is a miniature OEM. We have a lot of the same functions that all the major companies have, all of our computers link up, we talk about all the same processes, we’ve replicated the Ford and GMs of the world, just on the smaller scale. The future is incredibly exciting and we hope to continue shaping the way our industry thinks about alternative fuel, clean mobility, clean power and a clean future.”