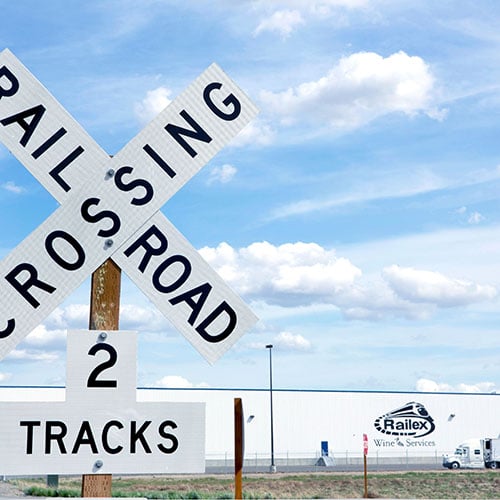 Paul Esposito, Executive Vice President of Corporate Communications and Network Planning for the company, talks about the philosophy that has guided them to where they are today, their current expansion plans, and why, when they look at the future, it’s full steam ahead.

Railex was founded in 2004 by Andy Pollack, through the idea of integrating unit trains within produce shipping industry. “During this time, there were a lot of regulations being levied upon the long haul trucking industry, fuel prices were high, and Andy saw the need for an alternative solution,” says Esposito, adding, “He had this idea that, if he owned locations on both the west and east coast, that running a specialized train made for produce goods could present a highly viable alternative for businesses.”

By 2005, Railex had found its two locations on each end of the United States, partnering with CSX Transportation in Schenectady, N.Y., and with Union Pacific Railroad in Burbank, Wash. Esposito says both locations provided different, yet equally crucial, strengths in providing them with an effective launch pad for their business. “The northeast is the largest consumer in terms of the United States, but even more important was the fact that Schenectady, about 150 miles north of New York City, had a distribution radius and workforce that was highly conducive to what we were trying to achieve,” he says.

With their site in Burbank, Wash., they simply saw a perfect match through the prevalence of produce in the region and a growing need for an alternative shipping solution to long haul trucks. “Washington, during this time was having a lot issues with inventory, in terms of available shipping vehicle options,” Esposito says, adding, “it even progressed to the point that the Washington State Department of Transportation was openly looking for alternatives.”

With Burbank located right in the heart of “potato, onion, apple, pear, cherry, and dairy country,” as Esposito describes, Railex saw their opportunity and pounced. “Here was an area with the need for someone to ship out their abundance of quality produce, and with an established location already in the northeast, the country’s highest consuming region,” he says, continuing, “it was a perfect fit for what we wanted to do, and laid the foundation for where we are today.”

Today, Railex has three established rail locations, opening up operations at a site in Delano, Calif. in 2008, and is in the process of cutting the ribbon on a brand new, fourth facility in Jacksonville, Fla., allowing them to now effectively ship to all four corners of the United States. “At each of our locations, we set up different temperatures, ranging from 6 to 10 zones which vary depending on the location, and have the ability to load 19 rail cars at a time,” he says, adding, “we consider each box car as its own little warehouse in itself, running at a specified temperature and containing compatible, like commodities in a manner that maximizes cubic capacity, and extends the shelf life of the products as a result.”

Esposito says the company invests strongly into optimizing the way they ship commodities, and recently have developed both a private fleet of larger, 72-foot boxcars (compared to the standard 64-foot), and a unique racking system to go inside them. “With the kind of heavy and dense commodities we find ourselves most often shipping, a 72-foot box car will enable us to add a bit more cubic space, and play into our goal of having the most appropriate equipment for the specific kinds of products we are moving.”

On the interior of these boxcars will be the implementation of a racking system that Esposito says will protect inventory from being double stacked. “We will be using reusable air bags and foam dividers to secure the inventory better, and avoid having one pallet sit on top of another,” he says, continuing, “we really try to view our business through a supply-chain thought process, because it leads to the development of end scenarios that are beneficial to us and our customers.”

Esposito says that aside from the unique shipping system that Railex offers, is the fact that shipping via rail is simply more cost effective than doing so by truck. Based on figures released by the Association of American Railroad, a locomotive burns 4 gallons of diesel fuel for every mile it travels, while a truck does a bit better, averaging between 4 and 5 miles.

For 200 trucks to come across the country, roughly 150,000 gallons of fuel will have been burnt, however the key is found in the loading capacity between trains and trucks. “It takes only three trains to move the equivalent of 200 truckloads across 3,000 miles,” he says, adding, “with these three trains, you’re burning 36,000 gallons of fuel, and over the course of a year, you’ll see that our services end up saving businesses millions of gallons of fuel.” Taking the savings even further, Esposito says the EPA calculated, based off these estimations, that rail-based shipping saves approximately 85,000 metric tons of CO2 emissions each year. It’s a system that truly is efficient inside and out.

Additionally, he talks about the philosophy of today’s produce market, and its focus on maximizing the efficiency of how they stock and sell their products. “A lot of companies want to basically clean out their shelves by the end of the day, so they can restock with fresh produce the next day and minimize excess product that can last for only so long,” Esposito says, continuing, “through this need, we have created a solution where our customers can store excess produce for the next day in our temperature-controlled distribution centers, allowing them to have their produce nearby and as fresh as possible.”

Between a constant stream of innovation and a system built upon efficiency, Esposito is quite confident about the future. “With our Jacksonville facility now onboard, we are able to reach just about every meaningful market here in the United States,” he says, continuing, “We have an established system in place, and with the addition of new racking systems, longer boxcars, and the integration of a refrigerated containment network into our fleet, we feel we are strongly suited to further handle today’s high-speed, demanding marketplace.”

Railex’s success has them taking an open-minded approach to the future, as Esposito says they have received strong demand from a variety of different industries, ranging from wine and beverage, to even pharmaceutical. “We don’t necessarily view ourselves as a threat to the trucking industry, but more so as a provider of supply chain solutions to where our services can fit best,” he says, concluding, “We have a great team here with excellent leadership, and I’m excited about what the future holds in store for Railex.”