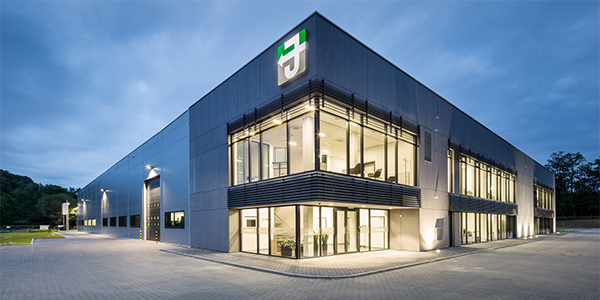 IF THERE IS ONE ECONOMIC INDICATOR THAT DARIAN Wentland watches religiously its housing start figures. As the Market Development Engineer of Jager Building Systems, he is all too aware of how his company’s future success is tied to how many homes are built in North America. For the last few years, business has been good at Jager, and according to Wentland that trend should continue in 2006.

“The 2005 estimate was for 2.05 million new homes in North America, yet the real number slightly exceeded that at nearly 2.07 million homes, the largest number of single and multi-family homes in history,” said Wentland. “In fact, each year for the past few years has been better than the preceding year. We shall see in 2006 if that trend continues with the current projection at just under two million. Even if that reduced estimate comes true it will be another outstanding year for Jager.”

Jager was founded nearly 60 years ago by a homebuilder in the Calgary area, who decided that by producing his own roof trusses he could greatly improve the speed and quality of the homes he built. From this small start as a building material manufacturer, Jager quickly expanded into other complementary areas such as truss plates and I-joists by acquired two existing truss plate brands and an I-Joist joint patent.

Over the years the truss plate and I-joist manufacturing entities grew and in 2001 this manufacturing division of Jager was acquired by a joint venture consisting of two companies, Tembec Inc., a $4 billion forest product company with 11,000 employees, and SGF Rexfor, an autonomous private financial concern sponsored by the Quebec government.

As Wentland explains, the joint venture is actually made up of two corporate entities: Temlam, Inc., the Laminated Veneer Lumber manufacturing plant, and Jager Building Systems, Inc., the I-joist and truss plate manufacturing plant. All sales are conducted through the key business driver, Jager Building Systems, Inc., with product coverage across North America.

MARKET APPROACH
Although Jager could sell directly to major homebuilders, the bulk of the company’s business is channeled through lumberyards (one-step) and wholesale distribution centers (two-step). Geography dictates how Jager approaches these channels. The company has learned to be sensitive to regional markets as one size or method does not fit all. “How we service a market depends largely on history,” said Wentland. “If the market in one area has developed through a strong two-step distributorship, then that’s who we sell to. In those cases, it’s the distributor who resells our products to lumber yards. The distributor drives the market and we don’t even try to buck the trend by attempting to sell straight to the lumber yards.”

In other areas, Wentland points out, where there is no dominant distributorship present, Jager works through a regional network of lumberyards. The company typically bundles production length packages of I-joists, which the lumberyard divides into cut packages that ere delivered to homebuilders.

In the distributor model, Jager sells bulk quantities directly, which are then further distributed/re-sold to families of lumberyards. “It’s easier for us to sell only to one full-service distributor in a given area mainly because it means that we don’t have to build multiple relationships with multiple lumber yards in a broad geographical region. But at the end of the day we don’t have a preference,” said Wentland. “We serve the market and service really is our key differentiator. Our business is not commodity driven – it’s performance driven. We ask ourselves, ‘How can we serve our customers?’ In the early days it was about how good your products were. If you had the best products, you controlled the market. Now everybody produces fairly good I-joists, so you have to go above and beyond on the service side to make and maintain long-term business relationships.”

Laminated Veneer Lumber
In addition to I-joists, Jager has penetrated the laminated veneer lumber market (LVL), a product that is quickly gaining acceptance among homebuilders for its strength as main support beams, window and door headers and other heavily loaded support members.

Manufactured using waterproof adhesives to pressure bond wood veneers With grains running parallel, LVL combines the best qualities of natural wood with the strength and reliability of an engineered wood product. According to Wentland, to manufacture LVL, logs are peeled into veneers, dried, ultrasonically graded for strength, and layed-up, pressed and cured similar to plywood, except that all the veneers are laminated with grain oriented in the longitudinal direction. This randomizes natural defects and growth characteristics giving LVL its high strength and consistency.

Using this technique, Jager creates a panel 1 3/4 inches thick, up to six feet wide and as long as 60 feet. The panel is then ripped in the longitudinal direction to make lumber like planks; most often turned on its edge in application and loading and field laminated into multiple ply beams and heads, similar to dimensional lumber only stronger.

The Joint Venture partners have invested $130 million into a new state-of-the-art LVL facility in Amos, Quebec, to complement its sister plant in nearby Ville Marie. Wentland estimates that the new LVL plant will lift sales from $145 million to over $200 million in the first year of operation alone.

“In the eastern side of North America, we were LVL-restricted, which was frustrating because we knew that clients would love to buy from us, but we had no LVL to sell,” said Wentland. “The new Amos facility, which will focus a large portion of production to the Eastern section of the United States and Canada, will have an immediate positive financial impact on Jager’s bottom line.”

Quicktools Software Suite
Another key to profitability is having a robust software product to facilitate planning and layout with builders and architects. According to Wentland, QuickTools Enterprise Suite, Jager’s proprietary software technology, has become as critical in the industry as the products themselves. “Twenty years ago a framer could literally design and build your house on the site. However today I-joists are at the stage where you need some design knowledge to effectively use them,” said Wentland, “We have our own proprietary design software that helps the designers choose the most efficient engineered wood product(s) for each situation.”

QuickTools enables designers and builders to create a layout quickly and easily for even the most customized of home designs. Once the layout is input into the system, it can be fulfilled by the lumberyard to the exact product specifications output by QuickTools. “If you want to stay in the game you must have whole house design software,” said Wentland. “Again, it’s part of the service aspect of the business because it allows our clients to create detailed product placement drawing for the end user the, the home builder.”

Jager’s reputation and brand equity combined with its leading edge LVL manufacturing and software tools – not to mention its relentless service commitment – make the company a leader in the home-building industry. And as the housing boom continues, it’s clear that the 320 employees at Jager Building Systems will continue to be busy meeting the demand for its products from distributors and lumber yards throughout North America.