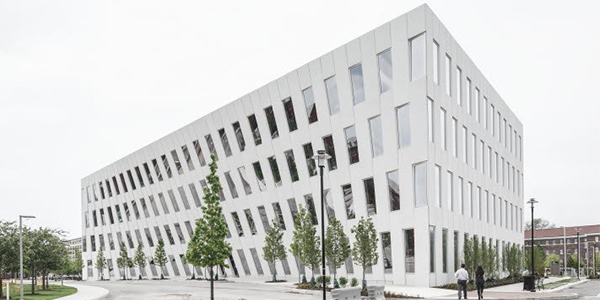 When it became necessary to raise the roof last summer to add capacity to the existing John C. Marshall parking garage in Tyson’s Corner, Va., a project that had plenty of complications, High Concrete Structures, Inc. (HCSI) of Denver, Pa., was called in as the ultimate problem solver.

“We had to do some remedial work to accommodate the additional level,” explains HCSI marketing rep A. J. Sassaman. That included drilling into existing members of the structure, raising them and removing some precast items. “Because the garage was out of plumb, the new pieces were sized to compensate for the tolerance issues,” Sassaman says.

Another problem: the garage had to stay open during the project. But taking care of the needs of customers was a piece of cake compared to getting the necessary equipment on site to erect the 217 precast concrete pieces.

Weighty Issues
“The logistics of the site meant that there just wasn’t enough land to properly set up a standard crane assembly,” Sassaman continues. “Since we couldn’t move around the perimeter, we needed an especially large crane to lift the precast members into place because of their weight.”

But the bottom line is that HCSI solved all of the weighty issues, presenting The Orr Co., the property’s owner, with a newly expanded garage and justifying the latter’s faith in HCSI to get a difficult job done.

It all began back in 1931 as a welding shop. HCSI itself traces back to 1956 when it was founded as Kurtz Precast Corp. It became part of High Industries in 1977.

Dedication to Quality
“‘Right the first time’ is our key principle,” points out Thomas A. Holmes, vice president of sales and marketing for HCSI. The company’s proprietary Quality Management Program is an integral part of it. Holmes points to the numerous awards and other recognition his company has received as proof that HCSI hasn’t strayed from that principle. That recognition has come from such organizations as the Precast/Prestressed Concrete Institute, the American Concrete Institute and Associated Builders and Contractors.

HCSI itself designs, makes and installs precast concrete structures throughout the Mid-Atlantic region. “Our products are used in everything from industrial and commercial buildings, to parking garages, stadiums and arenas, and prisons,” Holmes points out. “Precast concrete offers design flexibility, including architectural facades in almost any color, form or texture.”

The Price is Right
Among the most important benefits of precast concrete structures: “They save money,” Holmes asserts. “New fabrication technology has reduced the initial cost of precast construction, making it very competitive.

“Another advantage is speed,” he continues. “Our systems go up faster and with fewer problems than with other construction materials.”

Innovation is another item that HCSI brings to the table. For example, the company is the producer of the nation’s first 15-foot-wide double tee. It’s also the inventor of the Tilt-Frame Transporter for economical shipping of the wider double tees, and it was the first to design and produce QualiTEE System double tees for parking structures.

On the Grow
Indeed, growth is what HCSI is all about right now. Two new manufacturing facilities are coming on-line in the first quarter of this year to increase production capabilities. In addition to building a new 52,000-square-foot production facility in Denver, Pa., HCSI is replacing a structural batch plant built in 1947 and upgraded in the 1980s, and an architectural batch plant erected in 1972.

“Increased market demand has fueled our expansion,” notes Doug Lorah, vice president of operations. “The new construction will provide us with one of the largest single plants in the country.”

Besides expanding the company’s production capacity, the new facilities are introducing state-of-the-art production technology. For example, according to Lorah, “in the batch plants, hydronix moisture sensors in the aggregate holding areas and a moisture sensor in the mixers mean more precise control over the amount of water present in each batch.
“An automatic liquid pigment dispenser will enhance batch consistency,” Lorah continues. “And the computerized system will generate real-time product inventory and material usage data.

Adding More Jobs
“Over the next three to five years, the expansion is expected to add 115 jobs in production, material handling, engineering and detailing,” Lorah enthuses. “The bottom line is that we will be able to better respond to growing customer demand and the shrinking lead times that fast-track projects require.”

Still More Projects
In Vienna, Va., meanwhile, the company is doing a design/build project for the Washington Metro Area Transit Authority. It’s a 596,000-square-foot, six-level parking structure with a 2,300-car capacity. And in North Wales, Pa., HCSI is doing yet another project for Merck—two four-level parking structures totaling 365,000 square feet at a major office complex.

Indeed, HCSI’s customers keep coming back. But in one recent instance, there was yet another problem to solve: matching the finish of a new structure to one that was built seven years ago, considering the aging process and the fact that an aggregate essential to the finish is no longer available.

The solution? “Using natural pigmentation, a blend of fine aggregates, to achieve the desired color match,” Sassaman explains. “Another aesthetic achievement of note is the so-called ‘eyebrow’ projections that overhang windows and door openings. These slanted, rectangular architectural shapes provide shade and visually link the new wing to the original building.

“We have always had a strong sense of quality and integrity,” Holmes concludes. “That position of high ethics, combined with dedication to quality and customers, will continue to be the guiding force behind everything we do.”