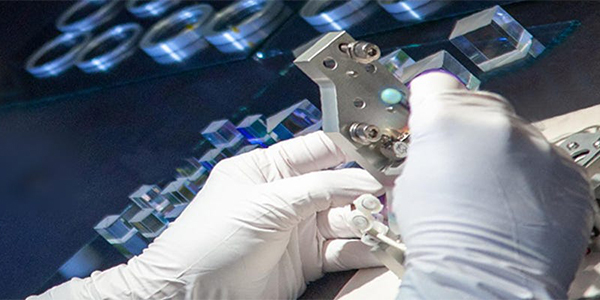 CVI Laser has been on the cutting edge of laser optic technology for 33 years. Literally.
From slicing semi-conductor chips to corrective eye surgery, the company’s laser optic products have been at the forefront of dozens of high-tech and commercial applications.

“We’ve expanded the product base to pretty much anything you need to do with a laser,” said Lynore Abbott, marketing communications manager for the Albuquerque, N.M.-based company.

Now the company is poised to increase its standing in the market with an infusion of capital from its new owners, Minneapolis-based Norwest Equity Partners. With new equipment, space and employees around the globe, the company’s sales grew by 40 percent last year, said Abbott.

How pervasive are CVI products? The firm specializes in optical glass products for everything from DVDs to grocery store scanners to high-tech lenses and components used in lasers for research, semi-conductor manufacturing, medical devices and telecommunications.

Pushing the limit
CVI was founded by Dr. Haggie Hahn in 1972 to manufacture high-damage threshold optics used in laser work at Sandia and Los Alamos National Laboratories. The name is derived from the Roman numerals for 106, a number that is closely associated with laser technology. The company gained momentum when the former Bell Labs developed a femtosecond – a millionth of a nanosecond – laser using CVI-designed optics.

“That’s about as short as you can make a laser pulse,” said Abbott. “Researchers try to push the limits – what’s the maximum energy, what’s the shortest pulse, what’s the longest pulse.”

Femtosecond lasers were used in the technology world for cutting semi-conductor chips into smaller and smaller pieces, and in biological experiments at the University of Texas to detect cancer cells without having to perform a biopsy.

Those products solidified the company’s reputation in the rarefied world of the optics industry.

The firm later began making the optical components themselves and has since grown as lasers have entered the mainstream.
The company is capitalizing on new trends in the industry, such as using lasers instead of ink to mark various products, such as pills. Though laser equipment costs a lot more up front, the expense is offset by the high-maintenance of ink markers. “There’s a whole lot of waste when you use ink,” Abbott said.

Lasers are also being used in a Star Wars-like medical procedure that uses light to find out which drugs interact best with a person’s blood – before they even take them.

The company went global in 1982 when it established three factories in South Korea, supplying optics for the consumer electronics industry. It also maintains a team of sales representatives around the globe.

In 2000, it bought a 20,000-square-foot plant on the Isle of Man in the United Kingdom, which produces optics for astronomy and semiconductors for the telecommunications industry.

At its 66,000-square-foot headquarters in Albuquerque, the material comes in blank form from suppliers, such as Corning. Technicians grind, polish and coat the devices. They also do prototype and high-end custom work.
CVI employs 375 people worldwide.

A boost from Norwest
Its customers include Johnson & Johnson, Intel, General Electric, Northrop Grumman and Boeing. Only about 16 percent of its business is devoted to lasers. About 25 percent is dedicated to the semiconductor manufacturing industry, 12 percent to consumer electronics and the balance to defense and aerospace industries.

In 2003 CVI’s founder sold the company to Norwest, the investment arm to Wells Fargo. Abbott said sales are more than $30 million. “We’re not public, we’re privately held, but at the end of the day Wells Fargo has to report our earnings,” she said.
The crowded optic industry is dominated by three behemoth German manufacturers, Zeiss, Jenoptik and Unaxis, which do $300 to $400 million in sales annually. Next comes Newport Corporation, which earns about $140 million a year. “Then take a big jump down to us,” said Abbott. Below CVI are many smaller niche players. “We’re trying to take on Newport,” she noted.

Last fall, CVI won a contract valued at more than $1 million to supply mounts for laser optic assemblies to the National Ignition Facility, which is operated by Lawrence Livermore National Laboratory in California. The contract, which runs through 2007, comprises a variety of custom-designed mounts that have been optimized to reduce wavefront distortion for the project’s Injection Laser System.

Contributing to the company’s huge growth last year was CVI’s new opto-mechanic sub-assembly service, in which the company assembles complex optical equipment for its customers. “Instead of just selling $200 lenses we now do the assembly that might cost $3,000,” Abbott said.

Using the customer’s design and building material, CVI does the assembly in-house then ships back the finished product. Its customers “may know a lot about biology and user interface but don’t want to assemble optics,” she said.

CVI maintains one of the largest inventories of coated and uncoated laser optics in the world, which enables the company to fill many orders for standard optics within 24 hours. In addition, CVI works closely with its customers on developing prototypes and customizing solutions, taking an idea from raw material to total system integration.

CVI has also recently added a research and development division and boosted its opto-mechanical product line, with its own in-house machine shop, to make mounts for lenses.Since its purchase by Norwest, the company has been on a spending spree, buying several new pieces of equipment, including five $80,000 interferometers, which ensure that lenses meet narrow optical quality tolerances. Early this year, CVI unveiled a new, long-lasting standard coating for windows and lenses for deep UV application products, a significant improvement in technology for the semiconductor industry.

The upgraded effort recently paid off when CVI was recommended for ISO 9001:2000 certification. The recommendation came from an independent firm that studied business processes, documents, data and records, interviewed employees and observed actual work practices at CVI’s manufacturing, development and distribution facility in Albuquerque. Now, the company is seeking the same level of recognition for its plants on the Isle of Man and in South Korea.

CVI also gives back to its home community. Last year, the company and its employees teamed up to raise $5,000 for the leading service center for the homeless in Albuquerque, and CEO Stuart Schoenmann served as the head chef at a fundraising barbecue.

That’s not all that’s been cooking at this fast growing company in New Mexico. With its new product lines and state-of-the-art equipment, CVI Lasers believes it has finally found the recipe for success.